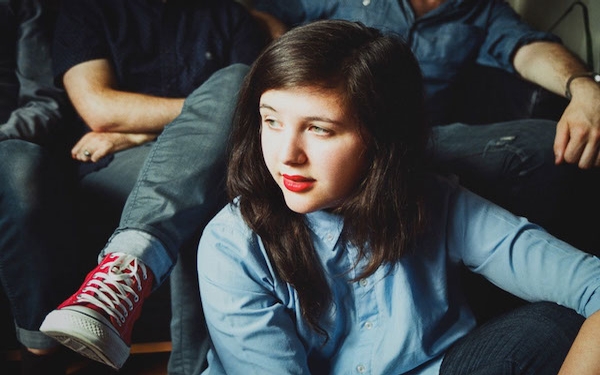 Two years ago this week, Lucy Dacus and guitarist Jacob Blizard walked into a studio in Nashville and, for a college project he had been assigned to complete over winter break, recorded nine of her songs in three days.

The then-teenage Dacus (pronounced DAY-cuss) then went back to Richmond, Va., where she had been studying film at Virginia Commonwealth University. A hometown show led the local Egghunt label to release the songs as her acutely perceptive, impressively composed debut, “No Burden,” last February, including its terrific lead single, “I Don’t Want to Be Funny Anymore,” about social awkwardness and seriousness of purpose.

Since then, things have been on the upswing for the now-21-year-old guitarist and singer. Rave reviews led to offers from larger labels, and Matador, longtime home to Dacus favorite Yo La Tengo, reissued the album in September.

Dacus and her calming, conversational alto and whip-smart songs “Strange Torpedo” and “Troublemaker Doppelgänger” got mainstream attention on “CBS This Morning” and when music geek and then vice presidential candidate Tim Kaine gave her a Rolling Stone shout-out. (“His daughter went to kindergarten with me,” Dacus said. “So I wasn’t as surprised by it as the rest of the world.”) “No Burden” wound up on many year-end lists, and Philadelphia music magazine Magnet named it album of the year.

Dacus and Blizard were in Portland, Ore., to begin work on the follow-up. “Yesterday, I was in Powell’s, this great bookstore,” she said recently, while walking to the studio for the first day of recording. “And I saw a copy of Magnet with my face on it. I took a picture of it, but I felt like I had to keep it a secret. I didn’t want anyone to see me doing that.”

Dacus said Canadian band Broken Social Scene and Bruce Springsteen helped shape her as a writer — the latter because her guitarist father is the Boss’ “number-one fan.”

“I also really like Sharon Van Etten and Angel Olsen, who are people I’ve been compared to, though I don’t think we sound very similar. I guess the comparison point is we’re all women, we all have bands, and we’re all willing to talk about really personal stuff.”

When she came up with the songs on “No Burden,” she “wrote them not intending to share them,” says the songsmith, a voracious reader who just finished off Elena Ferrante’s four “Neapolitan Novels” and is digging into Simone Schwarz-Bart’s “Bridge of Beyond” and Nancy Mitford’s Zelda Fitzgerald biography. “I didn’t have a band, I was just solo. But sharing (the songs) gives them more value and more worth. In my eyes, making things is good, but sharing them is even better.”

Produced by Adam Thompson of indie outfit Thao & the Get Down Stay Down, the follow-up will feature a fuller sound, with horns and strings where appropriate, and also be “more vulnerable.”

“That’s the best kind of work,” she says. “I value the people who are willing to make themselves vulnerable and share work that is sensitive and maybe even hard to sing sometimes. Because that’s the music that provides the most solace and solidarity to the world.”

Dacus is a proud Virginian. But if she ever does move away, it’ll likely be to either Austin, Texas, or Philadelphia. “It just seems like there’s tons of creative projects there, whether it be music or restaurants or small businesses. It seems like there’s a real world for new ideas in Philly.”

Dacus gave up on film school partly because of the lack of creative control in a collaborative medium. “I couldn’t have imagined working on a film I didn’t believe in,” she says. “Plus, the film industry is so dependent on wealthy people, I got kind of cynical about it. When I’m on a stage, it’s just me, singing a song with words that I wrote and I believe in. And if I don’t believe in them anymore, I’ll stop singing that song.”