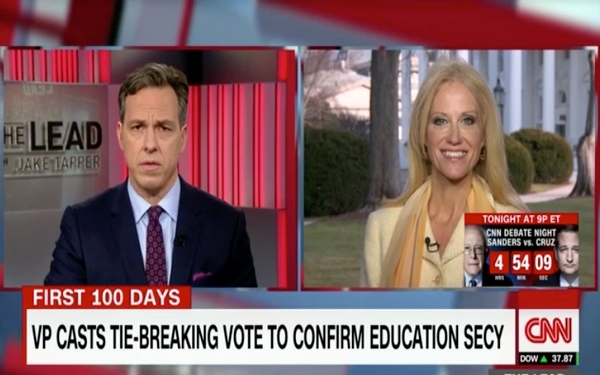 Top White House adviser Kellyanne Conway appeared on CNN's "The Lead" Tuesday in a 25-minute interview with Jake Tapper where they discussed President Donald Trump's falsehoods and the administration's treatment of the press.

"I don't think CNN is 'fake news.' I think there are some reports everywhere, in print, on TV, on radio, in conversation, that are not well-researched and are sometimes based on falsehoods," Conway said.

Conway conceded this even as Trump has continually slammed major media organizations, including CNN, The New York Times and The Washington Post, as "fake news."

The interview included some concessions from Conway, who said she was "trying to reach out" and "put out the olive branch."

At one point, Conway seemed to argue that the President offering blatant falsehoods as truth should matter less than his perceived accomplishments.

"Are they (falsehoods) more important than the many things that he says that are true that are making a difference in people's lives?" Conway asked. Read more at CNN.