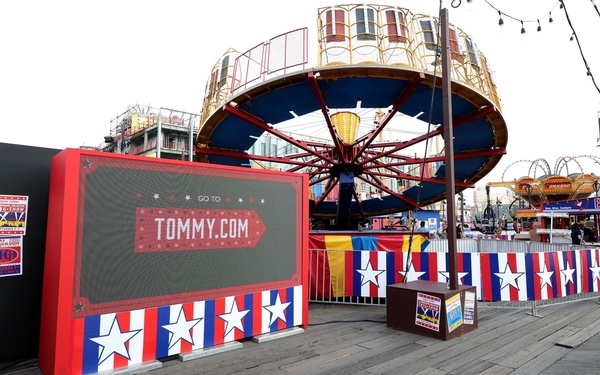 At New York Fashion Week in September, Tommy Hilfiger made headlines for transforming part of South Street Seaport in lower Manhattan into a carnival to present his first see now/buy now fashion show.

While millions tuned in Sunday to watch the New England Patriots take on the Atlanta Falcons, the Big Apple is getting ready for a Super Bowl of its own — New York Fashion Week.

When the eight-day marathon of shows kicks off Thursday, all eyes will be on what’s new in womenswear and beauty, mostly for next fall and winter. But if you can’t wait to read about all the glitterati and grit on your favorite blog or in a fashion magazine, here’s Stylebook’s scoop on what might make a splash during the week.

Political (style) statement: Don’t be surprised if the subject of America’s shifting political climate in the wake of the 2016 presidential election turns up on the runway. At the men’s shows at Paris Fashion Week last month, Balenciaga showed hooded sweatshirts, polos, tees and an oversized blanket scarf in a muted patriotic palette emblazoned with logos inspired by Democratic presidential primary candidate Bernie Sanders’ campaign signage. Similar sentiments echoed in collections at London’s men’s shows a few weeks ago with subtle and overt nods to Brexit and global uncertainties surrounding the Trump administration. With so many New York designers having rallied behind Democratic presidential candidate Hillary Clinton, a surge of power pantsuits, styles steeped in rebellion or maybe something optimistically colorful could wind up trending as a kind of political protest.

Even more see now/buy now options: The chance to see clothes on the runway and buy them in stores or online shortly after was all the buzz at New York Fashion Week in September — and for some brands, the switch from previewing styles that wouldn’t be available until months later paid off. Soon after Tommy Hilfiger debuted his capsule collection with supermodel Gigi Hadid in a one-of-a-kind carnival runway show, lots of pieces reportedly sold out online or were only left in limited sizes. After Rebecca Minkoff showed her first shoppable collection, she reported a 200 percent spike in sales. Expect more designers to dabble with this formula. Those who are able to balance spectacle with savvy social media teases will be the most successful.

Straying from tradition: A number of designers are forgoing the traditional runway show or presentation in exchange for a more original way to unveil their latest collections, while others are fleeing New York this fashion month altogether. For instance, Opening Ceremony presented its spring looks in a fashion show-inspired ballet last month at Lincoln Center. On Feb. 28, Vera Wang will debut a short online film featuring her fall collection. Even retail chain Banana Republic is shaking things up with pop-up shops on Thursday in select stores so shoppers can see its spring pieces designed with the brand’s style ambassador Olivia Palermo. Meanwhile, Mr. Hilfiger, Ms. Minkoff, Tom Ford and Rachel Zoe are taking their shows on the road to Los Angeles this season to focus on their West Coast markets.

More diversity: A refreshing mix of ages, ethnicities and body types were cast for shows in September, making it the most body-positive season to date, according to the Fashion Spot’s Runway Diversity Report. But there’s still work to be done. The number of models of color on New York City runways, in particular, declined a bit last season, the report found. On the heels of the presidential election, fashion’s who’s who have condemned President Donald Trump for his remarks about Muslims, Hispanics and women. Perhaps this could be the catalyst that sparks more attention to inclusivity on the runway that’s been lacking for so long.

Let’s get #social: “Pics or it didn’t happen” has become the unofficial mantra for the social media age, but at New York Fashion Week it’s all about the hashtag to spread the word of the latest trends far and wide. Coming up with a custom one for guests to tag their show posts with has become key for designers to get their brand trending across social channels before, during and after their main event. Plus, models with a strong social influence of their own (such as Point Park University student-turned-mega model Matthew Noszka, who has 460,000-plus followers on Instagram) are especially in demand by designers looking to increase their digital followings. The takeaway: Stay tuned to your favorite designers’ social accounts for a slice of the New York Fashion Week action.