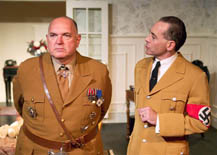 The Inkwell Theater's 'All Steps Necessary' is based on the transcripts from an actual meeting run by Nazi Field Marshall Hermann Göring (Richard V. Licata) with other Nazi officials to brainstorm what ought to be done about the “Jewish Question.” The date is November 12, 1938, three days after Kristallnacht.

After the events of Kristallnacht unravel, an angered Göring does some investigating on his own and finds out Goebbels conducted the horrors of that evening without the approval, or even the knowledge, of Hitler himself. Göring and Dr. Woermann express serious concern that Goebbels has jeopardized any chance at foreign relations and the ability to coordinate the German economy accordingly.

When representative of the Insurance Companies Association, Edouard Hilgard (Warren Davis) is invited into the meeting, his claims that all insured parties contractually must be reimbursed, be they German or Jewish, are mocked by the officers until Hilgard feels pressured to leave. Eventually Dr. Hans Fishboeck (Geoffrey Wade), Austrian Minister of Finance, also makes an appearance to ask for assistance from the German powers for a plan Austria has to prevent Jews from reopening the businesses that were taken away from them. Göring agrees to sign a decree authorizing Austria to withdraw licenses from any shop owner, regardless of the “Jewish Question.”

Strong performances create a slice-of-life, truthful account of a meeting at which most humans would not wish to be present. Michael Oberlander's portrayal of Goebbels is specific and full of life. He presents the human qualities that can exist within such a disgusting being. Larry Reinhardt-Meyer as Heydrich is stoic yet vulnerable when appropriate, a fascinating character study.

Warren Davis is slightly eccentric as insurance representative Edouard Hilgard. The mockery that is met with his mere relaying of the facts creates a discomfort in him that one would hope is because he has a conscience. Whether or not Hilgard actually had a conscience about what was happening in Nazi Germany is unknown, but Davis' performance provides us with one person with whom we might almost even be able to sympathize.

Richard V. Licata's Göring is rather distracting since the role must carry much of the piece, yet we are met with interrupted thought patterns throughout (try not taking a breath in mid-sentence, this will help, nobody does that in life).

Jim Ortlieb's direction seems to work very well, though it's hard to tell sometimes whether the performances are the result of the actors' work or the director's. But one brave blocking choice has actors sitting with their backs to the audience for a brief period, facing the men they chat with. We then become voyeurs in the room, witnessing the sickness within. In a way, the play becomes scarier at this point, when we feel it actually is happening.

This play is a must-see for anyone who still is in shock that such a thing as the Holocaust could ever happen. It's a historical paperweight that cannot be removed. This is an important piece. So, what are you waiting for? GET UP AND GET OUT!