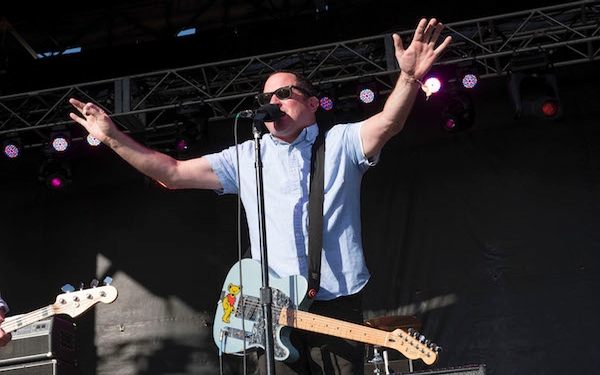 For more than a decade, as lead singer of Brooklyn indie-rockers the Hold Steady, Craig Finn has sung massive songs. On any given night, showered in a stream of sprayed beer by the group’s notoriously raucous crowds, the bespectacled singer weaves tales of big love and even bigger heartbreak, adolescent ecstasy and wallowing sorrow.

Finn, 45, says he’s always enjoyed this exercise in outsize expression. But as he says on a recent morning, when calling from his Brooklyn apartment, he finds himself these days increasingly drawn to exploring the “smaller, more regular, more mundane” aspects of life. It’s why, Finn says, for the past five years he’s been writing and releasing solo albums. “I definitely feel like sonically and spiritually these songs feel more like how I feel on a day-to-day basis,” he says of “We All Want the Same Things,” his third solo LP, due March 24 via Partisan Records.

Recorded with producer Josh Kaufman (who helmed 2015’s “Faith in the Future”), Finn’s latest album doesn’t shy away from uncomfortable topics, most notably co-dependency in relationships and how we often use one another to get through life. It’s a topic he mediates on explicitly in songs such as “Ninety Bucks” and “Rescue Blues.”

“I didn’t want to be cynical but I feel like there’s a version of modern love that’s mutually beneficial but maybe not perfect,” says Finn, who was divorced at age 28 and is currently in a long-term relationship. He mentions how he’s started to see many of his friends’ marriages dissipate. “People team up and at times even use each other to get through this world and life. These people in most cases are trying to keep their head above water, survive on some level.” They might not always love each other, he adds, but often “they make a good team.”

On the album’s magnificent centerpiece, “God in Chicago,” Finn explores what might be one solution for a couple in dire straits: full-throated escape from normalcy. A road trip yarn of redemption and revitalization, the song was in many ways a creative breakthrough for Finn. Despite acknowledging to long being a “talky” singer, “God in Chicago” sees the Minneapolis native going a step further and reciting what could be viewed as an extended poem over five minutes of somber piano chords. “I’m interested to see how people take it,” Finn says. “The critics might say ‘It’s not even a song. Why isn’t this just a story?’ Putting words on music. … I’m just interested in how those things go together. It’s what I do. I’m always trying to find new ways to tell stories with music and I think this is the furthest in that direction I’ve gone.”

Despite injecting chaos into the lives of the characters in his songs, in his own Finn has gotten more buttoned-up and workmanlike. When not on tour, he typically carves out about two hours every day to write songs. It’s a process he started in 2015 for Lent, and one Finn says prevents the pain of procrastination and keeps his creative wheels turning.

“I won’t wait to be inspired,” he says. “You can write a song about your cat and then you can change the name later. I’ve gotten to the point where I know if I write 20 songs and throw out 10 of them then Josh (Kaufman) will probably throw out five more. And then we have five songs to work on. Which isn’t to say that those don’t get reworked a lot: they get massaged and poked and prodded and rewritten and all that. But at least it gives you a jumping-off point.”

And how does Finn determine what’s a Hold Steady song versus a solo one? In the Hold Steady he only writes lyrics after guitarist Tad Kubler presents him with music, for his solo work he mans the entire songwriting ship. “So by me writing the whole song it pretty much automatically becomes a solo song per se,” he says. “Which isn’t to say the Hold Steady wouldn’t try them, but when I’ve written things that are that far along and brought it to the band we haven’t really been to Hold Stead-ify it if you will.”

In speaking with Finn one gets the sense of a musician content with his place in the world. To that end, and for someone whose recent album titles convey an explicit sense of optimism, does Finn have high hopes for the Trump years?

“I believe that people are good but obviously we have our work cut out for us,” he says. He describes a recent East Coast tour in which he literally performed in people’s living rooms. “I believe on some level we do all want the same things,” Finn says, not-so-subtly invoking the title of his latest project. “But we just vastly differ on how we’re going to get there.”