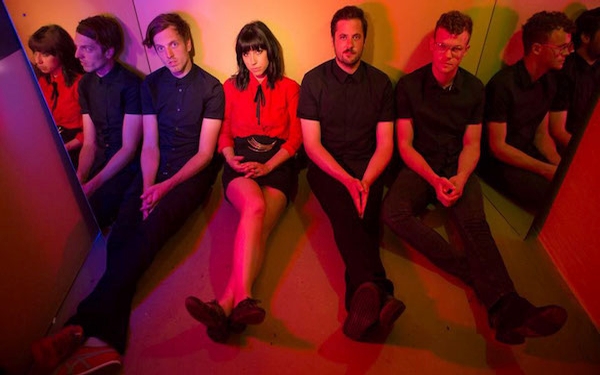 Chances are if you’re an appreciator of live music and have seen tours by the likes of Beck, the Shins, Yeah Yeah Yeahs or Conor Oberst in the past decade or so, you’ve noticed Jessica Dobson. She’s played guitar on the road for all those artists, a job that entailed not only a flair for showmanship but a wide-ranging stylistic command of her instrument.

In recent years, the guitarist-for-hire has morphed into a bandleader in her own right in Deep Sea Diver. The Seattle-based quartet self-released its second album last year, “Secrets” (High Beam Records), and it marks a distinct upgrade from Dobson’s earlier recordings with a sharper emphasis on — what else? — her guitar playing.

“I said that out loud many times” while recording the album, Dobson says. “I needed to bring out that guitar playing. I got ADD at the chords on (2012 Deep Sea Diver debut) ‘History Speaks’ — half of that album is me on keyboards. I knew I wanted to play more guitar this time … (and) I wanted to get some of that energy of what happens on stage, when a different side of my personality will come out.”

Over the agile, propulsive drums of Peter Mansen, Dobson brings more aggression to tracks such as “Wide Awake” and “Body on the Tracks” as part of a conscious effort to expand and embolden the band’s sound. It also forced the band to recalibrate its approach to how it wanted to release the album and interact with a music industry that isn’t exactly hungry for new guitar-based rock bands.

“It was a hard process to write ‘Secrets’ — I wasn’t above the sophomore stigma that a lot of bands deal with,” she says. “On a business level, there was a lot of discouraging things happening. When we first presented the songs, there were crickets in the air from some of the people we were working with.”

Dobson got the message, but instead of caving in, she parted ways with her business team and started fresh by creating her own record label.

“I think we’ve always been a risky band for people to invest in, and I don’t understand why,” she says. “We’re not straight-to-mainstream rock radio music, but I don’t think our records are that weird. I’m glad we trusted our instincts and released this record ourselves. We’re not touring on the level of the Shins or Beck, but it’s definitely grown, and put us more on the map.”

The album’s less-than-smooth birth went hand in hand with its lyrical themes. “I kept writing (the words) ‘wide awake’ in my journal over and over, and that ended up being one of the songs,” Dobson says. “It’s so cliche to talk about now, but two years ago, it was the beginning of social media exhaustion. There were things I’d say as a kid, ‘Why do my parents watch so much TV?’ ‘They’re sleeping through time, not experiencing things.’ And I realized this is our generation’s version of that — we’re living in a fantasy world with no connection to real life. There’s a darker theme of ‘wake up,’ but it’s also hopeful in that people can be awakened from a slumber, shed that skin and be reinvigorated.”

Dobson grew up in California and felt invigorated the first time she picked up a guitar. “You go from sitting down playing the piano to standing up playing the guitar, and right away I wanted to learn to write songs,” she says. “Usually people start out with more of a folky thing, but I wanted to play guitar solos. It was empowering.”

At 19 she was signed to a record deal with Atlantic Records as a solo artist. But the “singer-songwriter jangle-pop songs” she was writing and recording only led to frustration — the label shelved two albums that she recorded.

“It happened fast, and I was pretty wet behind the ears,” she says of the deal-making process. “I knew I wanted to do this and play music wholeheartedly, but I made some decisions that I would not have made now. Before the deal was made, there was a lot of wining, dining and being flown to play showcases for men above 50 at record labels. It was not incredibly enticing. But when you’re young and you get that sort of attention, you wonder, ‘Will I get another chance?’ So you go for it.”

While recording in Seattle with producer Phil Ek for Atlantic, she met Mansen — her future drummer and husband. “So all was not lost,” she says.

They began working on music together, and the first Deep Sea Diver album came out while Dobson was still in her guitar-for-hire phase. Finally, after a couple of years of road work with the Shins, she decided to go all-in with her own band, armed with a head full of ideas gleaned from her experiences.

“I was never really an obsessive gear head, but I did have to inherit some pedals, and research how to get those sounds on albums like ‘Midnite Vultures’ when I was touring with Beck, and some of the Shins stuff, these very particular reverb and chorus sounds,” Dobson says. “It gave me a new palette to play with and it helped me create soundscapes for Deep Sea Diver songs. I got more confidence on stage, got bolder, which is something Peter is always pushing our band toward. I definitely loved that chapter of my life, but I also really believe in the work we’re doing with Deep Sea Diver.”