Tove Lo, from out of nowhere 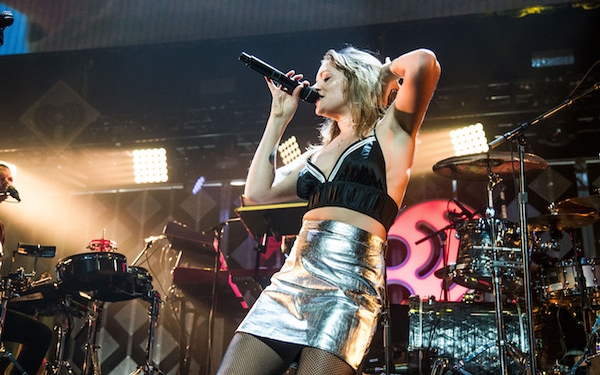 A few years ago, Swedish singer-songwriter Tove Lo was trying to get her life going. Her solo career was in its formative stages, which is a polite way of saying nothing was really happening. One night, drunk at a birthday party where she knew no one, she jumped onstage and sung with the band. This drew the attention of a songwriter in attendance, who flew her out to Los Angeles to meet his friend, Swedish pop hitmaking factory Max Martin.

Tove (born Ebba Tove Nilsson — the Americanized pronunciation rhymes with “stove”) joined Martin’s songwriting collective, Wolf Cousins, where she wrote songs for artists like Icona Pop and Ellie Goulding before eventually striking out on her own. After her first hit, “Habits (Stay High)” in 2013, “Life changed overnight,” she recalled in a phone interview. “All of a sudden, I’m all over the world playing songs, and people are relating to me. It’s crazy.”

Her two studio albums, “Queen of the Clouds” and the recent “Lady Wood” (yes, the latter title means what you think it means) are both electro-minded pop albums that are unsentimental in their depictions of partying and sex. In an interview a few days after the Women’s March, Tove, who is funnier and friendlier than her cool-girl rep might suggest, talked about life as a pop star and feminist in the Age of Trump. The following is an edited transcript of that conversation:

Did you see the Women’s March last weekend?  I was in Sweden. I wish I could have been there for that. I saw images of people carrying the “Lady Wood” symbol, which made me very happy and proud.

Being careful is the worst thing you can do.  No, I won’t. I’m very open about what I think and feel. I will continue to speak my mind and talk about sex and all the things that I enjoy in life, and don’t enjoy in life.

You’ve never seemed that interested in being liked.  Thank you! That makes me happy. I think it has to do with this all happening to me when I was a bit older. If it happened to me at 15, maybe I would feel differently, but I know who I am.

You grew up as a fan of riot grrrls. Twenty years later, it’s like they never happened.  I know. I’m like, “Didn’t we already go through this a long time ago where, female artists were sexually liberated and claimed their space, and said what they wanted to say? I thought we were all there already.” Growing up in Sweden, it’s very liberal, it’s way more equal than a lot of other places in the world. I never thought, Oh, I can’t do this because I’m a woman.

You’ve had two almost separate careers, as a songwriter, and then as a performer. When you were a songwriter for other artists, were you careful about what you said?  Yeah. When I write for me, it’s about what I want to say. A lot of people don’t want to express themselves that way. It’s up to you personally, what you want to share and how blunt you want to be. I would sometimes have to edit lyrics, like, “I don’t think she’s going to be comfortable saying this.” But a lot of the time, people wanted to write with me because they loved the honesty. A lot of the time, that was the attraction.

Once you write a song, can you say, “OK, I’ve written about this subject, I’m done, I can put it away, I’ve made sense of it”?  In a way, yeah. It’s very therapeutic. If I’m going through something really heavy, I can’t write about it during that time, I have to process it a little bit. If I’m going through a breakup, I can’t write about that moment until it’s past a little bit, because its too painful to be in it and admit to it at the same time, if that makes sense.

Part of the story of your getting famous involves the day you jumped onstage out of the blue, and started singing with the band at a party. Do you ever wonder what would have happened if you’d never done that?  I remember when I was going to go to that party, I was like, “Should I go? I don’t know anybody there. Is it going to be weird?” I got drunk and grabbed the mic and started singing, and I wonder, what if I just wouldn’t have gone? Then I wouldn’t have made it to LA, I wouldn’t have met Max and (record producer) Shellback, and I wouldn’t have gotten their attention. I wouldn’t have gotten an idea of what it was like to be a writer, then realized, I do want to be an artist, I want to have something out there that’s mine. It’s crazy when I think back on it. It feels like it was a lifetime ago, but it wasn’t that long ago.