‘Speed Sisters’ of the West Bank: Doc on all-female race car team in the Mideast 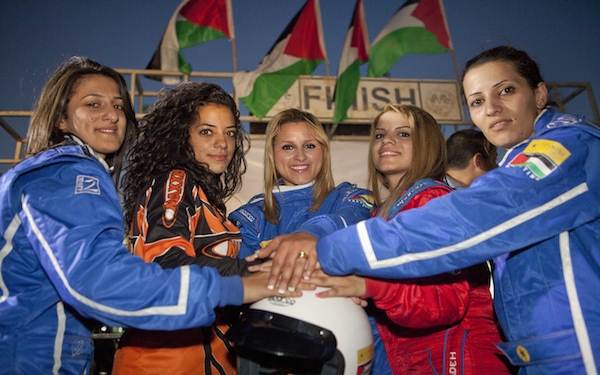 They rev their engines and race on a battered land.

They are five Palestinians in what’s billed as the first all-female race car team in the Middle East. They roar beyond checkpoints of Israeli soldiers and zip through the glare of religious conservatives who curse their humming pistons and blowing hair. Shifting gears and beating clocks, they are restless souls in a sequestered world that cannot contain their visions.

They are the Speed Sisters of the West Bank. Male competitors have accepted them in a culture where tradition and patriarchy run rigid and deep. The young women have also grown up with the pop of Israeli tear gas and the whistle of stones hurled by Palestinian youths. They fix their makeup and paint their nails because, as Betty, one of the swiftest among them, says, “it’s very important for me to show I’m not a tomboy.”

Amber Fares has captured their spirit, victories, rivalries and defeats in her documentary “Speed Sisters.” The film moves past the politics of the Arab-Israeli conflict and into the lives of five women with fuel-injected dreams. The trappings of the region are inescapable — razor wire, barricades, gunfire — but the film’s Palestinian women, at least those in the West Bank, are more fully realized than the repressed portrayals of Arab mothers and daughters common in the West.

“There’s a tendency for us to paint the Middle East with broad brushes,” said Fares, whose film is available on iTunes. “Palestinian woman have been involved in social movements throughout history. They were active in the intifadas. The U.S., especially, now really needs to see the nuances. Things besides terror, (Islamic State) and what we’re exposed to so many times. I think the film breaks a lot of stereotypes.”

The documentary focuses on Marah, Noor, Mona, Betty and team captain Maysoon. Noor boxes and lifts weight, Maysoon plans her marriage while driving along the walls that divide Israelis and Palestinians, Marah shares the racing zeal of her dentist father, Mona tends to get into wrecks and Betty has a ferocious desire to win. They are dedicated to the auto-cross racing of navigating obstacles and cones on small tracks, a fitting metaphor for the geographical and political constraints that define the lives of Palestinians.

“What are we supposed to do, stop living?” asks Marah. “When this happens, the occupation wins.”

Fares met the women in 2009 at a race in Bethlehem at the helicopter pad of former Palestinian leader Yasser Arafat. “Engines were revving, and these girls were putting on helmets, and I said, ‘What’s going on?’” said Fares. “They each have amazingly strong personalities. Even when you’re on the same team, emotions run high. It’s the nature of competition.”

That is born out in the rivalry between Betty and Marah, with Maysoon acting as peacemaker. Betty is horsepower and flash; Marah is quieter but no less ambitious. At once intrigued and amused, men and boys watch them from rooftops and walls surrounding vegetable markets and vacant lots. Women have raced in the Arab world for years, but not on a team and not in Palestine. Their notoriety spreads and headlines — “Palestine’s Fast and Furious Females” — create an air of gritty exoticism.

“It’s like the pepper in your food,” Betty says of the team. “The race without the girls is no fun.”

When Noor does an interview with a Dubai television station, the Internet reacts quickly. Many support her, others think she should be spending more time with the Koran. One post reads: “You should resist the (Israeli) occupation with stones, not sports and fashion.” Maysoon shakes her head. Her fiance is a race-car driver from Jordan who has accepted that she’s particular about rpms and scouring junkyards for parts.

“The problem,” said Maysoon, who runs a clothing store, “is that men are afraid of a strong woman. They worry she will take over.”

But at home and along roads, where they often wait for sheep to scatter, the women follow news of the latest clashes and whether new curfews will be imposed. While driving to a practice course, Noor, Maysoon and Betty encounter an Israeli army roadblock. The women get out to see what’s happening, and a soldier fires a tear gas canister, hitting Betty in the back. Noor and Maysoon drive her to the hospital. She is all right, except for a large bruise.

The film allows such moments to linger at the edges as if bits in a troubling, ever-present mosaic. “We wanted to show,” said Fares, whose family migrated from Lebanon to Canada more than a century ago, “how the occupation and the politics were authentic to their lives.”

“Speed Sisters” reminds viewers of the failure of the Arab Spring revolutions that swept the Middle East and North Africa in 2011. The promise of those revolts, except in Tunisia, fell away to autocrats and chaos, diminishing prospects that the Israeli-Palestinian conflict would be resolved. Palestinian attacks on Israelis, an expansion of Israeli settlements in the West Bank and President Donald Trump’s comments and suspicions about Islam have further narrowed the likelihood of a two-state solution.

Still, the women are emboldened. They drive from Jericho to Jenin, from Bethlehem to Ramallah, slipping into racing suits, squealing tires and counting the clock’s tick.

On one day off, Maysoon, Noor and Marah head to the Mediterranean Sea. May-soon and Noor have Jerusalem identification cards, allowing them quick passage through Israeli checkpoints. But Marah must endure lines and searches. They arrive on the coast around dusk.

Marah has not been out of the West Bank for years. “We are separated by only a checkpoint and a wall, yet the difference is huge between here and there,” she says in the film. “They took the most beautiful places we had.”

Wind blows through the palms. The sun slips toward the horizon. Noor and Marah run into the sea with their clothes on. They swim beyond the waves.

Maysoon waits on the shore, yelling for them not to go out too far.