La Rocca: From the Emerald Isle to the Streets of Hollywood 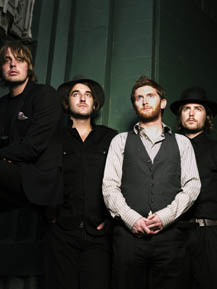 It would be so easy to come right off the bat and compare Ireland-to-L.A. transplants, La Rocca to a certain other band of Irish rock titans, but vocalist/guitarist Bjorn Baillie is thrilled that, so far, his band has escaped that comparison.

He comments, “We've got some great comments, none of them have been comparing us to anyone which has been great. They've all been centered around it being an original and refreshing show to see.”

Baillie along with brother Simon Baillie on bass, Nick Haworth on keyboards and drummer Alan Redmond are fresh off their first trek across U.S. as the support act on two different tours.

“We were doing support for the Vacation and the Sun and that was more in the clubs. Phoenix has got great shows in these amazing venues like in San Francisco, Washington and Philadelphia. We got to play the same set, but adapt it to the different venues, ” remarks Bjorn.

“I think it's a good rock   'n' roll show. We're trying to get as much of a balance of our entire sound in seven or eight songs. Our live show is the best example of what we do as a band, until the record comes out in August.”

The upcoming full-length was produced by Tony Hoffer (Beck, Belle and Sebastian) who also did their current Sing Song Sung EP. The pulse-pounding title track of which has been setting bodies in motion throughout L.A. since the band moved here last July.

The quartet's evident chemistry, both onstage and off, is a product of knowing each other for quite a few years. Bjorn met Haworth and Redmond through mutual friends in college. He recalls, “Alan and Nick were in not really a band, just a lot of friends in a house who played guitars and piano. I had songs and they didn't – which is, you know, a key ingredient when putting a band together. [laughs] Then, we needed a bass player.”

Getting Simon to join the band is something Bjorn jokingly refers to as “either the greatest or the worst move I've ever made” before adding, “No, Simon is the best. We get on very well. He brings a very good balance to the band.”

The brothers grew up in a house where Bjorn says, “None of the rest of our family play any instruments. They're all tone deaf. But [we had] lots of records, lots of different stuff not your usual Beatles or Stones.” Instead, the brothers were raised on artists like Roberta Flack and Muddy Waters.

Having a diverse musical background has lent to the cultivation of their own sound as musicians. The band's name also lends itself to helping the band stand out among the rest now, although it was chosen at a time when Bjorn remembers, “A lot of the bands, like Oasis and Blur, had just one word names. ‘La' is a prefix in Italian and Spanish for ‘the,' so it's kind of one of those names. We hoped it would ride through all of the different fads of names though.”

La Rocca is actually the name of a pub back in the U.K. where the band would inevitably end up at 2 a.m. Not only does the band foster the traditional Irish penchant for pubs but is incredibly staunch in its philosophy of working just as hard as it plays.

Bjorn states, “We don't assume anything before we play. It's either going to be the worst or greatest night, we're ever going to play. We're still on the up, still working hard.”

La Rocca's Sing Song Sung EP is currently available. The band will perform May 31 at the Troubadour, in West Hollywood. For more information, visit www.larocca.ie .