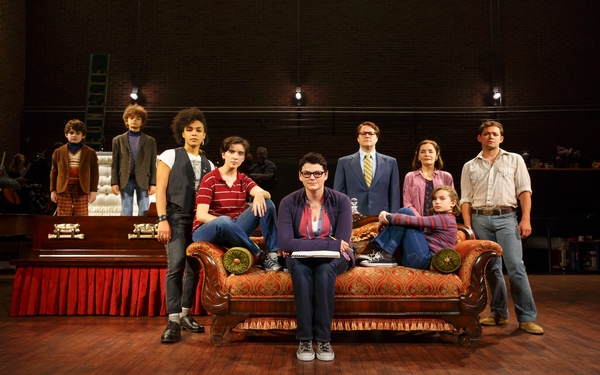 The Tony Award-winning musical “Fun Home” opens February 22 at the Ahmanson Theatre and continues through April 1, 2017.

Based on Alison Bechdel’s best-selling graphic memoir, “Fun Home” introduces Alison at three different ages in her life, as she explores and unravels the mysteries of her childhood. A refreshingly honest musical, Alison eventually sees her parents through the eyes of a grown-up. Winner of five 2015 Tony Awards including Best Musical, Book, Score and Director of a Musical, “‘Fun Home’ is extraordinary, a rare beauty that pumps fresh air into Broadway” (The New York Times).

“Fun Home” has music by Jeanine Tesori, book and lyrics by Lisa Kron and is based on the graphic novel by Alison Bechdel. Sam Gold is the director and Danny Mefford is the choreographer.

Bank of America is the season sponsor for the Ahmanson Theatre and Delta Airlines is the official airline sponsor.

Center Theatre Group, one of the nation’s preeminent arts and cultural organizations, is Los Angeles’ leading nonprofit theatre company, programming seasons at the 736-seat Mark Taper Forum and 1600 to 2000-seat Ahmanson Theatre at The Music Center in Downtown Los Angeles, and the 317-seat Kirk Douglas Theatre in Culver City. In addition to presenting and producing the broadest range of theatrical entertainment in the country, Center Theatre Group is one of the nation’s leading producers of ambitious new works through commissions and world premiere productions and a leader in interactive community engagement and education programs that reach across generations, demographics and circumstance to serve Los Angeles.

Tickets for “Fun Home” are available by calling (213) 972-4400, online at www.CenterTheatreGroup.org or by visiting the Center Theatre Group box office located at the Ahmanson Theatre. Tickets range from $25 – $125 (ticket prices are subject to change). The Ahmanson Theatre is located at The Music Center, 135 N. Grand Avenue in Downtown Los Angeles, 90012.