Found: 7 rocky Earth-sized planets in orbit around a nearby star 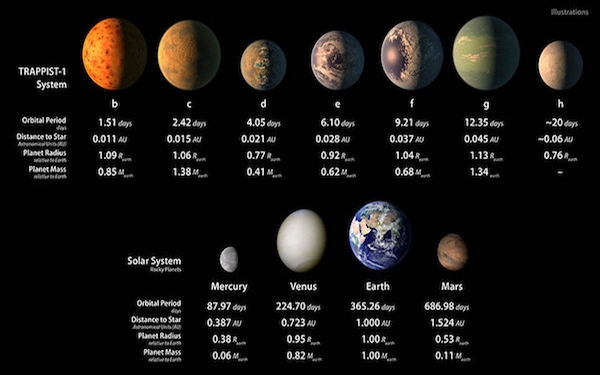 This chart shows, on the top row, artist conceptions of the seven planets of TRAPPIST-1 with their orbital periods, distances from their star, and radii and masses as compared to those of Earth.

Astronomers scouring the heavens for a planet home to life as we know it have found a tantalizing solar system with not one but seven Earth-sized worlds, just 39 light-years away.

Measurements made by powerful space telescopes and ground-based observatories indicate that several of these exoplanets orbit in the habitable zone, where water would naturally exist in liquid form.

The TRAPPIST-1 planetary system, described Wednesday in the journal Nature, marks the first time so many terrestrial planets have been found around a single star.

Although scientists believe the planets are rocky and Earth-sized, too little is known about their atmospheres and other factors to say whether they are truly Earth-like. But hopes are running high.

“With the right atmospheric conditions, there could be water on any of these planets,” said Thomas Zurbuchen, associate administrator of NASA’s Science Mission Directorate. “The discovery gives us a hint that finding a second Earth is not just a matter of if but when.”

Scientists are already probing the atmospheres of these planets for signs of oxygen, ozone, methane and other gases that could be signatures of life, said Nikole Lewis, an astronomer at the Space Telescope Science Institute in Baltimore.

The TRAPPIST-1 star is an ultracool dwarf star, much smaller and roughly 200 times fainter than the sun. Indeed, if our sun were the size of a basketball, TRAPPIST-1 would be the size of a golf ball, said study leader Michael Gillon, a researcher at the University of Liege in Belgium.

Even so, ultracool dwarf stars can be pretty hot places to look for potentially life-friendly planets.

In this case, that’s partly because all seven worlds orbit so close to the star’s surface, closer than Mercury is to the sun. With that kind of proximity, even the dwarf star’s dim light may provide enough warmth to support living things.

On top of that, the planets’ tight orbits make them very easy for certain telescopes to find.

The European Southern Observatory’s TRAnsiting Planets and PlanetesImals Small Telescope (TRAPPIST for short) in Chile uses the transit method to hunt for planets. As a planet passes, or transits, in front of its host star, it blots out a little bit of starlight, causing a dip in overall brightness that scientists can measure. If such a dip happens once, it could be a fluke. If it happens three or more times at regular intervals, it’s probably an orbiting planet.

If there are multiple planets, scientists can find them by looking at how they distort each other’s orbits. If a planet seems to transit a tad too early or too late, for example, it means that something else besides the star — such as a fellow planet — is tugging on it. This information also allows astronomers to make a rough calculation of the other planet’s mass.

Astronomers announced the discovery of three planets around TRAPPIST-1 last year, but even then they suspected there might be a few more.

So they observed the star for 20 days with NASA’s Spitzer Space Telescope, which is managed by the Jet Propulsion Laboratory in La Canada Flintridge, Calif. The space telescope was an ideal choice because ultracool dwarf stars are quite bright in the infrared portion of the light spectrum, which Spitzer measures.

However, the telescope was not designed to study exoplanets, said Sean Carey, manager of NASA’s Spitzer Science Center at Caltech. “We had to do a fair amount of engineering work” to get the precision required for the job, he said.

Ultimately, Spitzer captured 34 transits of seven different planets, whose “years” ranged from 1.5 to roughly 20 days. (Because the outermost planet passed by the star only once, the scientists could not determine its exact orbit.)

All seven planets in the TRAPPIST-1 system are probably rocky, with masses in a range of 20 percent less to 20 percent more than that of Earth, give or take, the scientists found.

Among the seven planets, three orbit in a zone where any water on the surface would be stable in liquid form. These worlds are neither too hot for it to boil off, nor too cold for it to freeze.

Gillon said the planets probably formed farther away from the star and then migrated to their present positions. If that is indeed the case, that would increase their odds of having water, since they would have coalesced in a region with lots of ice.

The dwarf star and its exoplanets have a lot in common with Jupiter and its many moons, Gillon and his colleagues said. Like the Jovian satellites, TRAPPIST-1’s planets are in such tight orbits that they are probably tidally locked. If so, that means they show the same face to the star at all times, rather like the moon does to the Earth.

The seven planets also seem to be orbiting in resonance with each other. These gravitational interactions could mean that the planets are being heated by tidal forces.

Whether that’s good or bad depends on what kind of world you are. For Saturn’s icy moon Enceladus, a little tidal heating goes a long way, powering polar geysers more powerful than all the hot springs in Yellowstone. For Jupiter’s moon Io, tidal forces caused it to become covered in inhospitable-looking volcanoes.

Of course, much more work remains to determine if any of these planets have the right conditions and chemical ingredients for life.

The prospect of sending a spacecraft to the TRAPPIST-1 system is still a faraway dream. Though close by galactic standards, it would take 44 million years to get there on a jet plane. Faster modes of transportation are being worked on, but those ideas are still in very early stages of development, Zurbuchen said.

Fortunately, astronomers expect to learn much more about these seven planets as powerful telescopes come online in the coming months.

TESS, NASA’s Transiting Exoplanet Survey Satellite, is set to launch in December 2017. It will be followed in 2018 by NASA’s James Webb Space Telescope, which will analyze these planets’ atmospheres.

“Could any of the planets harbor life? We simply do not know,” astronomer Ignas Snellen of Leiden Observatory in the Netherlands wrote in a commentary that accompanied the paper. “But one thing is certain: in a few billion years, when the Sun has run out of fuel and the solar system has ceased to exist, TRAPPIST-1 will still be only an infant star. It burns hydrogen so slowly that it will live for another 10 trillion years … which is arguably enough time for life to evolve.”