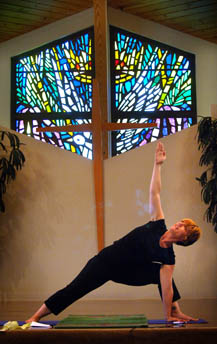 As Susan Bordenkircher sees it, Christians for too long have kept yoga on the mat. The certified group fitness instructor and a devout Methodist argues Christians should change their posture and stretch their concept of worship to embrace yoga.

Long controversial in some Christian circles, yoga is fast gaining adherents through the new wave of “Christian yoga” across the nation.

In 2003, the Roman Catholic Church reaffirmed its stance against Eastern practices such as yoga, which it had condemned in 1989, warning that yoga “can degenerate into a cult of the body.”

But as yoga has become more mainstream, Christian alternatives have emerged. Bordenkircher notes that “Christ-centered yoga is definitely not just a repackaging of traditional yoga. Yes, the postures are the same, the breathing the same, etcetera, because it is yoga.”

The difference, she says, lies in the intention: shifting the focus from self to God with yogic postures (“breathing in” the Holy Spirit, for instance), integrating health as critical to effective godly service, and slowing down enough “from our fast-paced lives to actually hear God's voice.”

That appeal has moved churches, such as Longwood Hills Congregational Church, to host yoga classes. Two years ago, Babetta Popoff rolled out twice-weekly “A Heart at Peace Christian Yoga” there. Classes average a dozen seekers, but she occasionally receives disapproving e-mails that insist yoga has no place in church. Popoff strongly disagrees.

“As Christians, we are given many examples in the Bible of those who took time to quiet themselves in prayer and meditation in order to reconnect with God: Isaac, Moses, David and even Jesus,” Popoff says. Yoga allows you to “reconnect with your body and your faith and find rest for your soul.”

Regardless of the spin, Sannyasin Arumugaswami, managing editor of Hinduism Today , says Hinduism is the soul of yoga “based as it is on Hindu Scripture and developed by Hindu sages. Yoga opens up new and more refined states of mind, and to understand them one needs to believe in and understand the Hindu way of looking at God. ... A Christian trying to adapt these practices will likely disrupt their own Christian beliefs.”

That yoga would compromise her Christian worldview worried Bordenkircher when she first explored yoga, but she fast fell in love with the practice. In 2001, Bordenkircher developed her “Outstretched in Worship” classes, which grew into a video series. And now she has the book.

“My goal has been to demystify the practice and reclaim it for Christ as just another way he can begin to heal us from the inside out,” she says.