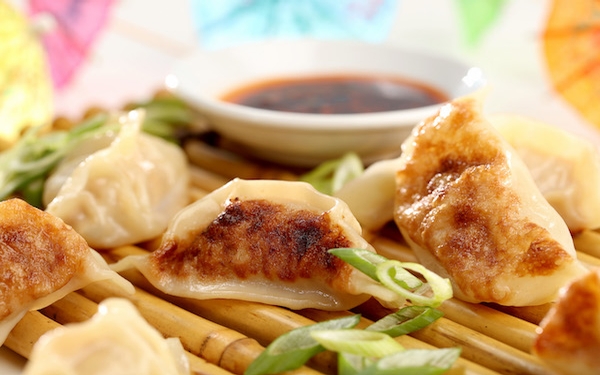 It's easier than you think to make dumplings at home. (Michael Tercha/Chicago Tribune/TNS)

Dumplings are as fun to make as they are to eat, which is a good thing for those of us not satisfied with the usual six or eight pieces served at restaurants and takeout joints. Making dumplings at home means you can eat as many as you can make.

That’s cause for a celebration. A dumpling party can be easy to pull off, especially if you use commercially made wonton wrappers. That way, all you need to do is make a filling — and there’s a world of ideas out there, three of which are listed below.

Here are the five steps you need to achieve dumpling deliciousness.

This is so easy, it almost doesn’t count as a step. Look for 3 1/2-inch round wonton or dumpling skins at the grocery store. These could be in the freezer aisle or in the produce section; see sidebar for more advice.

Try any — or all — of the three ideas below, pulled from three different dumpling cookbooks.

Wrap 1/2 cup washed, dried and finely chopped napa cabbage in clean cheesecloth or tea towel; squeeze to wring out excess moisture. In a medium bowl, use your hands to combine 1 pound ground pork, 2 tablespoons sherry cooking wine, 1 tablespoon finely grated ginger, 2 teaspoons soy sauce and 1/2 teaspoon kosher salt. Gently fold in the cabbage, and mix until fully incorporated. Place one tablespoon of the filling in each wrapper; follow shaping and cooking instructions in steps 3 and 4 below. Makes: 26 dumplings

Recipe from the just-published “The Dumpling Galaxy Cookbook” (Clarkson Potter, $19.99) by Helen You with Max Falkowitz.

Combine 1 cup each of chopped napa cabbage and finely chopped whole-cabbage kimchi with 2 tablespoons finely chopped scallions in a colander, making sure they are well-drained. Transfer to a large bowl; mix with 1 pound ground chicken, 2 tablespoons Chinese rice wine, 1 tablespoon sesame oil, and 1/2 teaspoon each salt and ground white pepper. (Wear rubber gloves if mixing by hand because of the chile in the kimchi.) Place one tablespoon filling in each wrapper; follow shaping and cooking instructions in steps 3 and 4 below. Makes: 44 dumplings

Recipe from 2007’s “A World of Dumplings” by Brian Yarvin.

Boil 1/2 pound spinach in water for a few minutes, and squeeze dry. Add 1 egg yolk, 1 cup ricotta cheese and 4 tablespoons grated Parmesan cheese; mix thoroughly. Place one tablespoon filling in each wrapper; follow shaping and cooking instructions in steps 3 and 4 below. Cooked dumplings may be served with a drizzle of olive oil and Parmesan cheese, or melted butter and fresh sage. Makes: 17 dumplings

Once you’ve placed a tablespoon or so of filling in each round, you can simply fold the wrapper in half and pinch it closed. You may need to brush the edge of the wrapper with water to get it to stick and stay closed, writes Brian Yarvin in “A World of Dumplings.”

But if you’re picturing beautiful, pleated dumplings, you can do that at home too. In her classic 1982 cookbook, “The Modern Art of Chinese Cooking,” Barbara Tropp offered very simple instructions for making a pleated Chinese dumpling: Spoon filling off-center in the wrapper and “nudge into a half-moon shape” with chopsticks or your fingers. Fold wrapper in half over filling and pinch closed at the midpoint only. Beginning to the right of the midpoint, make three tiny pleats on the near side of the wrapper, each pleat facing toward the midpoint. Press each pleat to the far side of the wrapper (which remains unpleated) to join the two sides. Pinch the right corner of the crescent closed. Repeat on the left side of the dumpling.

First, a decision — are you boiling your dumplings or pan-frying them?

Boiling instructions from “The Dumpling Galaxy Cookbook”: Bring a large pot of water to a boil. Add dumplings six at a time. Boil for 2 minutes on high, reduce heat to medium-high and cook for 2 minutes, then reduce heat to medium, and cook for 2 more minutes. Dumplings are ready a minute or so after they rise to the surface; their skins will turn puffy. Remove dumplings from water with a slotted spoon, bring water back to a boil over high heat and repeat with remaining dumplings. Serve immediately.

Pan frying instructions based on “The Modern Art of Chinese Cooking”: Heat skillet over high heat, add oil to coat the bottom of the skillet by a scant 1/4 inch. Reduce heat to medium. Place dumplings in skillet flat-side down. Raise heat, if necessary, to maintain a “merry sizzle,” and brown the bottoms. When bottoms are evenly browned, pour in enough water (or chicken stock) to come halfway up the side of the dumplings. Cover, simmer for 7 minutes or until the water is almost absorbed and the dumpling bottoms are crisped.

“Don’t dip right away,” warns Helen You in “The Dumpling Galaxy Cookbook.” She writes that “sauce can be a crutch for middling dumplings that don’t deserve a seat at your table. Before you whip out the soy sauce and chile oil, try your dumplings plain. You may be surprised at how little adulteration you need.”

For Asian dumplings, my go-to dipping sauce is a Barbara Tropp recipe, again from “The Modern Art of Chinese Cooking”: 1 tablespoon soy sauce, 2 teaspoons Chinese black vinegar or balsamic vinegar, 1/4 teaspoon each minced ginger and hot chili oil or sesame oil. (That’s for one person; adjust quantity to fit your crowd.) Western dumplings? Melted butter, some grated cheese and, maybe, a splash of heavy cream, always works for me.