Angels & Airwaves: May 8 @ the Troubadour 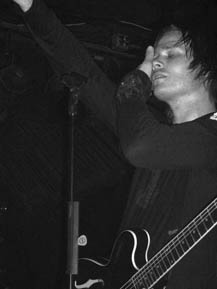 Not even did Kurt Cobain killing himself, R&B singer Aaliyah dying in a plane crash or Dimebag Darrell being shot dead during a concert evoke the same amount of sadness in me as when I heard the news that my favorite trio Blink 182 was no longer.

I never claimed Blink-182 to be the saviors of punk rock, although it did just so happen to be Blink-182 that introduced me to the dreamy DeLonge and allowed me to have my biggest school-girl crush since New Kids on the Block's Donnie Wahlberg.

Those days, weeks, months, even years without the Blink frontman just haven't been the same.

There's a line in the Blink song “Dammit” that says, “well I guess this is growing up.”

The first-ever Los Angeles performance with his new project Angels & Airwaves proved that DeLonge has indeed grown up.

He's replaced his trademark potty-mouthed humor with a more mature outlook on life. And rather than singing songs about prank calling his girlfriend's mom and how nobody loves you when you're 23, he's singing about what inspires him most: crisis and global events.

“A hundred things had to go wrong to get me here today, but a thousand things also had to go right,” DeLonge explained to the sold-out Troubadour crowd.

As he and the rest of the Angels & Airwaves crew – bassist Ryan Sinn (the Distillers), guitarist David Kennedy (Boxcar Racer) and drummer Atom Willard (the Offspring) – took the stage, it quickly became apparent that like myself, the majority of the audience was just generally thrilled to see the return of DeLonge, even if it was a more subdued and refined version than what we are used to.

As camera phones lit the otherwise dark stage, the band opened with “Valkyrie Missile,” a six plus minute cosmic-like song, layered with electronic effects and keyboards.

The band then hopped right into the poppy, Blink-esque “It Hurts,” followed by “Distraction,” a song DeLonge described as a conflict between love and war.

Spending the majority of the night with his eyes closed and his arms spread straight out, DeLonge appeared as though he could actually take flight at any moment. And for the most part, it only helped to accentuate the uplifting lyrics and the anthem-like feel to the songs.

Though the frontman took little time to talk during the band's set, when he did, it was mostly to share personal anecdotes about creating the bands debut We Don't Need to Whisper . However, he was still able to show audience members that although he has grown from a boy into a man, he's still got a loveable sense of humor.

“Are any of you in love? Well if you were in love, you wouldn't be here. You'd be dieting and making out,” he said as he segued into “Little's Enough.”

By the end of the night as DeLonge thanked everyone for coming and shared his hopes for Angels & Airwaves becoming the biggest band in the world, he offered words of inspiration about never giving up on your dreams. And for that moment, you could tell how genuinely sincere he was and how Angles & Airwaves just may be perfect fit for the newly, spiritually in-tune DeLonge.