The Joy Formidable, at the end of a long road, is even happier 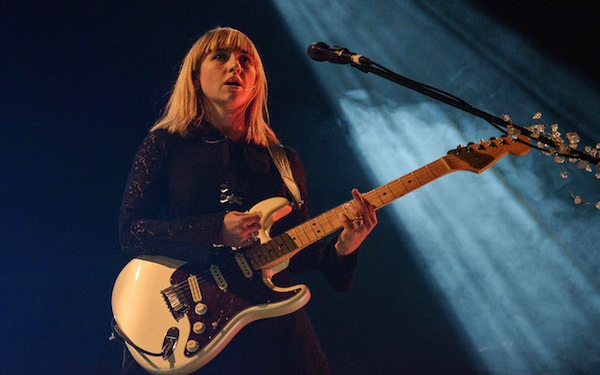 When musical couples who are in a band together break up, it can make a group newly interesting (Fleetwood Mac), destroy it entirely (Sonic Youth, probably) or in the case of Welsh alt-rock band the Joy Formidable, something in the middle.

Singer-guitarist Rhiannon “Ritzy” Bryan and bassist Rhydian Dafydd broke up their long-term relationship before recording the Joy Formidable’s most recent full-length release, 2016’s “Hitch.” The album serves as both a fiery relationship postmortem and an ode to their continuing closeness. “We’d been a couple through the band so far, so I think in that sense it is a breakup album,” Bryan says in a phone interview. “I think it’s actually celebrating that we’ve managed to remain the friends that we are, even after going through a big change. There was definitely some grieving and sadness involved, but we’ve been able to see past a lot of that.”

Bryan and Dafydd had been friends since they were kids, and lovers since the earliest days of the Joy Formidable, circa 2007. The band broke through in 2011, after the release of its official debut, “The Big Roar,” and quickly earned a reputation for frills-free, ‘90s-reminiscent rock. The group opened arena dates for the Foo Fighters and Muse, appeared on one of the “Twilight” soundtracks and became regulars on the Lollapalooza-Bonnaroo festival circuit.

By the time it released the turbulent “Wolf’s Law” in 2013, it was obvious to anyone paying attention that the Bryan/Dafydd relationship was in trouble. Their breakup a short time later, while on the road promoting the album, shook the foundations of the band, and of Joy Formidable Inc. “I think a lot of people did view it as a catastrophic change,” says Bryan. “I think a lot of people expected the seams to break. We definitely didn’t completely feel supported when we broke up. I think most people were imagining that everything would collapse.”

The chaos was both internal and external: Around the time Bryan and Dafydd broke up, the band changed its management company and left its record label. Bryan doesn’t say as much, but not all the changes appear to have been voluntary. “I think it was a lesson in feeling like once people felt like things weren’t going so well for us, they stepped away,” she says. “It’s a test for the people around you. I didn’t go into this industry naively, but it was an eye-opener, how meaningful relationships and friendships can be withdrawn so quickly.”

By Bryan’s reckoning, the group had been on the road for six years straight before she, Dafydd and drummer Matt Thomas retreated home to North Wales, locking themselves in a studio together to make “Hitch.” The enforced togetherness might have seemed counterintuitive, but after spending so much of their adult lives together in close quarters on tour, the members of Joy Formidable were just retreating to the safety of what they knew.

“The dynamic of a band is such a strange thing — it’s like family, the glue that keeps us together,” Bryan says. “It’s a real kind of bond. We look out for each other. It would’ve seemed so futile to have spent nearly a decade together making music to allow it all to just disappear because we can’t look at it in a philosophical and positive way. There were moments when we felt quite alone through it all, and we had to look to each other during a time when it was quite hard to look to each other.”

The band released the album on its own label, and followed it up in fall 2016 with a seven-song EP, “Sleep Is Day,” which contains acoustic versions of “Hitch” songs and covers of David Bowie and Misfits tracks. To promote it, the Joy Formidable has resumed its relentless touring schedule. “If anything, it’s better now,” Bryan says. “We argue a lot less.”