Halifax: Making its own Fate Through Inevitability 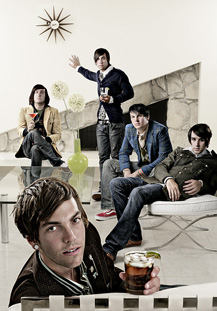 This is the story…

Picked to live in a van…

Have their lives sometimes taped…

And find out what happens…

When a bunch of local L.A. kids from the ‘burbs try their luck at putting together a band, tour with the biggest names in rock and become sort of icons within their scene…

It's … really not what you think it is.

Picture the quiet, isolated bubble of Thousand Oaks, Calif. A small town full of affluent upper-middle class families, a place where nothing ever happens.

Now flash forward to present day, where Thousand Oaks-bred rockers Halifax have suddenly gained a bit of notoriety and a reputation as a group of hard partiers and debaucherers. A bit of a far cry from the action-less town of their upbringing.

While not born and raised in Thousand Oaks himself, drummer Tommy Guindon struggled to break out of the monotony of his own home in Maui. But considering Hawaii isn't really known for its burgeoning punk scene and has yet to receive a visit from the Warped Tour, his dilemma wasn't so far off from his soon-to-be band mates in SoCal.

After relocating to T.O. for college, Guindon, along with vocalist Mike Hunau, guitarists Chris Brandt and Adam Charles and bassist Doug Peyton, would settle as Halifax's permanent lineup and find a home on Drive-Thru Records. The band's tumultuous journey is culminating with the release of its latest album, The Inevitability of a Strange World.

“This album is just straight up in your face rock 'n' roll. It's our heart and our soul,” says Guindon. “It's exactly who we are. This album defines Halifax.” Though to be fair, Guindon knows that lately his band has been recognizable for other reasons unrelated to music.

Without getting into unnecessary specifics, Guindon says, “We party just as much as any band. I wouldn't say we take it out of control, but we definitely live our lives to the fullest and have fun.” And what's the point of any job if you're not having fun? “You need to love what you do,” he says.

Listening to the album's lead single, “Our Revolution,” full of old school metal riffing and hand-clapping infectiousness, makes it clear that this attitude is Halifax in its element. Lauded as the second coming of Mötley Crüe for a generation of kids with asymmetrical hair and tight pants and boys who wear makeup … maybe Halifax picked the perfect time to revive the hedonistic mentality so commonly associated with that era.

“Our live show is full of energy, full of excitement. You're coming to see a show, you're going to get a show,” says Guindon. “We're not one of those bands that just stands around in our own designated areas.”

As to whether or not they'll bring their bravado full circle by donning the spandex and utilizing the Aquanet, Guindon lightheartedly jokes, “Maybe. We might just get up there naked one day.”

Ultimately, however, talk is cheap, no matter how big the talk may be. Guindon and his band are aware of this, which is why they make the effort to back their rose-tinted (or beer-goggled) living-in-the-moment energy with a real emotional connection to their music.

“My favorite song on the album is ‘Such a Terrible Trend,'” says Guindon. “We recorded that song in Connecticut, and that song described the whole atmosphere of where we were living. The lyrics have nothing to do with living in Connecticut, it's just how I felt every day, really mellow and relaxed and confident. The song has a really good message, saying everyone should live their own way.”

Painting quite the opposite picture from what common perception of his band, Guindon says, “When we're driving in the van, all of us are usually pretty quiet. Everyone's usually reading or sleeping. And Mike's obsessed with Warcraft.” Not to be outdone, Guindon also professes a love of all things Discovery Channel. My Chemical Romance can eat their geek hearts out.

Considering how much Halifax's members have accomplished for being as young as they are, though, they can be afforded a break from having to keep their cool powered on all the time. “For us to have a record in Japan, Australia, Canada, Europe and America, and to have toured all those places, I've already lived my dream,” Guindon says. “I could die a happy man tomorrow. Not many people get the chance to live their dreams.”

The fact that Guindon realizes this while still experiencing it only proves that the partying side of Halifax barely scratches the surface of showing the band's artistic potential. Unashamed of who they are, where they come from and where they're set on going, the members of Halifax offer no apologies and will make no excuses on the way to meeting that potential.

And that's about as real as it gets.

The Inevitability of a Strange World is currently available. Halifax will perform June 2 & 3 at Chain Reaction, in Anaheim. For more information, visit www.halifaxrock.com.