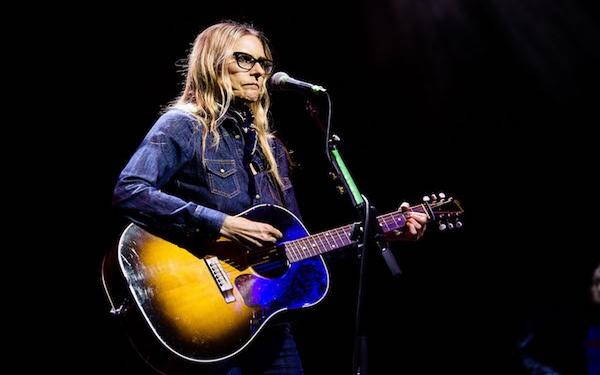 During a conversation about her minimal, lightly arranged new album, “Mental Illness,” singer and songwriter Aimee Mann pauses to apologize for the noise in her Los Feliz home.

Her husband, musician Michael Penn, is loading boxes in an adjoining room, and as the sound of tape being ripped from its roll echoes, Mann bemoans the hassle of home renovation. “We’re such hoarders,” she says. “We have so much garbage.”

Mann, 56, is relaxing in a space that to a visitor would seem the opposite. She’s surrounded by vintage beauty, including an upright piano, a bass drum, books and knickknacks placed neatly within built-in shelves. The outlier? A stuffed Santa Claus sits neglected on a stereo speaker, a remnant of a long-gone season.

If an album with the title “Mental Illness” suggests messy thoughts, the reality is similarly misleading. Mann’s ninth solo studio album, which comes out March 31, is an exercise in restraint, relying on understated guitar, a touch of bass and drums and sparse string arrangements composed by her longtime producer, Paul Bryan.

Filled with lyrics that highlight tormented characters, the 11 songs on “Mental Illness” are the most recent by an artist best known for her Grammy-nominated work on the score to Paul Thomas Anderson’s film “Magnolia.”

On that score and across her acclaimed body of work, Mann’s empathy as a songwriter has resulted in her lyrics being painted as depressing.

This is a lyricist, after all, who indicted optimists in the title to her album “@# percent&*! Smilers” and dumb people in an earlier one, “I’m With Stupid.” And though Mann is friendly and has a dry, sarcastic demeanor, her role as a nihilist in “The Big Lebowski” seems a bit of typecasting.

“Mental Illness,” she says, was composed as a response to that perceived nihilism.

“I just thought, take the cliche — or what I think is my stereotype — and just allow myself to roll around in it,” she says. “Because, honestly, that’s kind of what’s most fun for me anyway.”

Mann must have had a blast. Every doomed syllable is sacred and every tragic rhyme fits, as though each song were a puzzle to which only Mann knows the solution.

In “Lies of Summer,” about someone in a mental facility, she sings, “If the doctor would just sign this pass/ I’ll put my hand up on the plexiglass.” In “Philly Sinks,” a love letter to a lost soul, she bemoans, “It’s always locusts, or floods or drought/ And then it’s parties or prayer/ He picks a girl he can live without/ And puts her down over there.”

“Sad songs or introspective songs or songs about emotionally complicated things? I just love that,” says Mann. “I didn’t like anybody more than Elliott Smith, and that was some dark stuff.”

Mann pauses as if trying to explain the allure. Wearing jeans, a worn gray cashmere sweater and an orange scarf tied around her neck, she’s the epitome of Los Angeles casual cool.

“Here’s why,” she finally concludes. “Emotional honesty is uplifting — and it doesn’t really matter what the emotion is. Writing the songs is never, ever depressing for me. I don’t think you can write from a position of depression, anyway. You can be sad, but that’s not the same thing.”

This is Mann’s first solo record since “Charmer” in 2012, and it comes three years after her musical partnership with songwriter Ted Leo under the moniker the Both. On their self-titled debut, their songs featured more sonic urgency and electric guitar and were penned by a pair of kindred songwriters who labored over every line.

“She helps me hold myself up to a higher standard,” Leo says on the phone from his home in Brooklyn. “She’s helped me draw out of myself the ability to find a better word or a better rhyme here or there when I would have been OK with letting something pass if it felt good.”

The goal, says Mann, who writes her work on an acoustic guitar, is to have “the song do all the heavy lifting, so that the production doesn’t have to make up for anything.”

“There’s no fluff in her writing. It’s super tight,” says Bryan, Mann’s producer and bassist. Bryan has worked with her for nearly two decades and says that because Mann’s last few projects featured synthesizers and distortion, she expressed the desire to work with different constraints.

Bryan compares the process to the cooking show “Iron Chef.” Miming the announcer, he says, “‘Today is squid ink and succotash. Make a beautiful meal in an hour.’ It’s really fun to work like that, and Aimee’s super open to doing that.”

As the songs evolved, though, Mann and Bryan couldn’t resist the allure of the recording studio; in the process, he suggested string arrangements. “That became the palette,” Bryan recalls.

At first, Mann was wary of strings, but Bryan’s approach won her over. “Each song gets a different treatment,” says Mann, citing the album’s last song, “Poor Judge,” for what she describes as “the real Paul Buckmaster/Elton John treatment.”

“Patient Zero” intermingles a story about Hollywood failure with the notion of the city as a living, breathing being. As the song progresses, plucked strings work with minimalist percussion to create momentum. “The picture I had was the grid of L.A. — with the traffic moving through it like blood through veins,” says Mann.

Another inspiration was a newfound appreciation for the soft rock band Bread, whose lead singer David Gates’ supplicant tone tempered songs such as “If,” “Baby I’m-a Want You” and “Make It With You” with sentimentality. “It’s just so unashamedly soft and round — like a soft, exposed underbelly. All his songs are like, ‘I’ll wait around for you. Whatever you need, I’ll be here.’”

Mann flips such sentiments, though. “Simple Fix” is a hardened ode to lost love that features the couplet, “We’re babies passing for adults/ Who’ve loaded up their catapults.”

Mann, an outspoken critic of President Donald Trump on Twitter, adds that she was writing “Mental Illness” as the 2016 presidential campaign was unfolding. Even if the record doesn’t dwell on current events, the political climate coats the songs with a kind of emotional soot.

“If I was putting out a really cheerful record, it would make me feel really strange, because, like most people I know, it feels like an emergency,” she says. “The idea of putting out a record seems not that important. But, you know, one sort of must go on.”

Mann stays silent for a moment. Then again, she concludes, “the fact that it’s thematically about people who are obsessed — who won’t let go after things aren’t working — strikes a chord.”