What Would Jesus Wear? 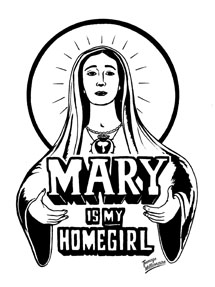 In the beginning, Jesus was an outcast, misunderstood and punished for it.

Those days are over.

Walk through any mall, flip on the television or turn on your radio, and you’ll see that Jesus is cool. Mel Gibson’s The Passion of the Christ made $125.2 million in just five days.

Jesus is becoming a pop-culture icon and inspiring mainstream movies, music and, most noticeably, fashion. He is on T-shirts, messenger bags, wristbands, license plates, notebooks, stickers, bobbleheads and even ashtrays.

The most trendy T’s are the “Jesus Is My Homeboy” and “Mary Is My Homegirl” shirts made by Teenage Millionaire. The company has been around since 2002, but Hollywood hotties like Madonna and Ashton Kutcher made these shirts popular last year.

Libby Wolfe, a high school junior in Overland Park, Kan., says the shirts are great, depending on who is wearing them.

“It’s really cool that people are able to wear those shirts and not be criticized. But I don’t like it when people wear them and say they are all into God and then they don’t walk the talk, they’re just about the trend,” Wolfe says. “I really respect it and think it’s cool when they wear it and are really representing their faith.”

Michael MacDonald is the creative director of Living Epistles, a Christian apparel manufacturer (www.livingepistles.com). He says the Christian subculture has to communicate with people on their own level and these T-shirts provide a platform for that.

“If pop culture wants to focus on Jesus without bashing him and people have a genuine desire about getting close to him, it’s not a bad thing,” he says.

“As long as the message of Christ isn’t lost and these things are drawing people closer to Christ, I embrace it,” Brooks says. “The church has to go beyond what she is doing now to reach the younger generations and these things give the church a greater responsibility to teach people the truth.”

Christians aren’t the only ones wearing their faith; other religions are sporting theirs as well. Many faiths, from Jewish and Catholic to Buddhist and Muslim, are blending fashion and religion.

Craig Karpel says it’s all about being proud and the shirts are popular because younger generations are more expressive.

“People really want to express themselves and differentiate themselves from the rest,” says Karpel, co-creator of Jewcy, an online boutique (jewcy.com) that sells its own Jewish designs as well as Rabbi’s Daughters and the Jewish Fashion Conspiracy.

“Younger people seem to be more aware and tolerant of diversity, and everything seems to be moving in a more accepting and expressive direction.”

And for the most part, people sport the T’s to create an opportunity for dialogue, Karpel says. But anytime you’re dealing with religion, some people will be offended, he says.

“It is not meant to be self-hating in any way,” Karpel says of the religious T’s. “People that are more conservative think it is commercializing or lessening the value of the religion, but that’s not what we are doing. This is a very different world then it was even 30 years ago. When it comes to spreading religion, the methods have gotten a lot savvier and smarter than they ever were.”

Close to 20,000 methods can be found at Cafe Press, a Web mall that provides a venue for independent online stores.

“I think there’s always been an element of religious merchandise on the Web, but the thing that has changed is the use of religious icons,” says Maheesh Jain, vice president of sales and marketing for Cafe Press.

“Early on, it was rooted more in the religion and a conservative tradition. These days, it’s huge. There’s some political humor and religious merchandise is edgier.”

Although Jain can’t say what exactly prompted the change, he credits popular media such as “The Simpsons” and religious T’s sold at Urban Outfitters with a lot of the influence.

“People get inspired by pop culture and come up with their own take on it,” he says.

In addition to fashion, music is feeling the spirit, too. And we’re talking mainstream music, not gospel rock, rap or any of that.

Hip-hop’s current it-boy, Kanye West, rhymes about Jesus on his boundary breaking song, “Jesus Walks,” which is getting airplay on BET, MTV and mainstream radio.

“It is surprising to hear Kanye West on mainstream radio and on television rhyming ‘Jesus Walks,’” says Anthony Graham, a high school junior from Kansas City. “During a time when prayer and religion is being pushed out of the schools, it’s a real positive sign to see a song like that achieve commercial success.”

Kanye West isn’t the only hip-hopper with the spirit. Mase, who retired five years ago to become a minister, returned to hip-hop earlier this summer with a radio hit, “Welcome Back,” and is on a crusade to do upbeat, curse-free music. Mase says he is not going to talk about his faith on the album, but he is going to show people the light and live positively. Young Buck, one of 50 Cent’s partners is rhyme, incorporates his belief in Jesus in his verses. R&B, hip-hop artist R. Kelly’s double-album, Happy People/You Saved Me, features one whole disc dedicated to his faith.

Some people see this religious movement in the mainstream as a fad, but Anthony Graham disagrees.

“I don’t see this as a trend,” Graham says. “I see it as people are being more outspoken about their religion, and that’s a good thing.”

WHERE TO FIND IT