For people dying on L.A. streets, he offers help, and he won't take no for an answer 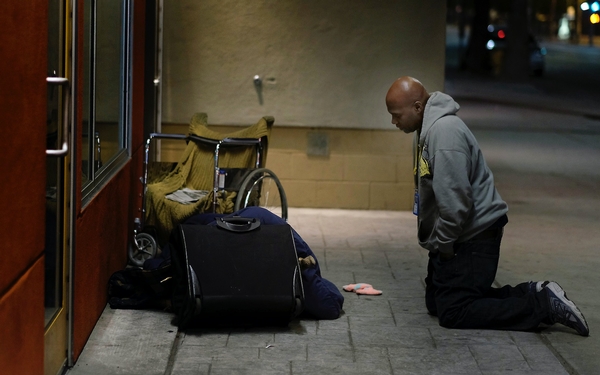 Mollie Lowery believed in Anthony Ruffin, and was convinced he would continue the work to which she had devoted her life. Before Lowery died last summer, the homeless outreach pioneer told me her protege had a story, but I’d have to get it from Ruffin himself.

I’d known the 48-year-old Ruffin as a tireless case manager for my friend Nathaniel Ayers. Aside from Lowery, I’ve never met anyone more dedicated to helping people with severe mental and physical illness. The work can be challenging, depressing and frustrating, because those with acute mental disorders often refuse assistance, and sometimes turn against the very people trying to help them.

But Ruffin keeps going back to the darkest corners of the city, undeterred, as if the next visit could bring a breakthrough. As if Lowery’s dictum — “whatever it takes, for as long as it takes” — is a call to duty.

Ruffin has 20 or more clients he checks on regularly. They include the Hollywood 14, who are so sick — some of them are barely alive — and have been identified by community leaders as priorities. It isn’t uncommon for Ruffin to find people sitting in their own urine and feces. His regulars include amputees and diabetics and drug addicts who can never get enough to kill the pain. Some are partially paralyzed and many are ghosts, their former selves barely visible in the shadows of unrelenting psychosis.

Recently he saw a man planted on the sidewalk on Sunset Boulevard, next to a smattering of rotten food. His skin had peeled off his lower body.

“He was sick in all that rain. He couldn’t move, couldn’t walk, he was stuck there,” said Ruffin, who made an emergency call, and the man was picked up and hospitalized. “Luckily I saw him when I did or he’d probably be dead by now.”

Ruffin often starts work at 3 a.m. or so. If it’s cold or raining, he goes out earlier and searches longer to make sure everyone is OK.

“Social service is a 9 to 5 business, but homelessness is a 24-hour business,” he told me. “I like to connect with people early morning or late at night, when there are no distractions … and there’s a moment of clarity. It’s just me and that person, and it’s very intimate. It’s like my little office, my environment, and I love it.”

One night last fall, when I traveled with Ruffin and Times photographer Francine Orr, Ruffin talked about the frustration of failing to convince people they need help, or to convince authorities they need to intervene. He said it felt like a death watch, and he was not being dramatic. Ruffin estimates that since 2008, about 40 of his clients have died — some of them on the streets, some in hospitals or some form of housing he negotiated for them.

But sometimes there’s success. On that trip last fall, Ruffin was on his knees in Hollywood, talking to a woman who had been anchored at a busy Hollywood intersection for 15 years. His efforts finally paid off. The woman was hospitalized not long ago and has a conservatorship hearing coming up, in which someone may be appointed to advocate for and protect her.

On a recent Thursday, Ruffin and I met with Dr. Susan Partovi, a skid row doctor. She has been exploring ways to reinterpret the meaning of “grave disability,” so authorities can intervene humanely and legally to force emergency treatment for people who might otherwise die. I’m all for it, because while I respect laws designed to protect the civil rights of those with mental illness, we can’t turn our heads while desperately ill people die at our feet and on our doorsteps.

Regarding the sickest of the sick, Partovi said she couldn’t conceive of letting a loved one suffer like that. But many of the people out there have no one to count on.

He told me his parents split when he was 12, and he had problems in school. The written word was an indecipherable jumble and he was placed in special-education classes. “They always thought I was slow, or ‘less than,’” said Ruffin, who lost his confidence, ricocheted in and out of trouble, and did time in jail as both a teen and a young adult.

But he tired of that routine and hated repeatedly disappointing his mother and stepfather, who had raised him right.

“I knew I had to change my life and everything about myself,” he said.

That began in earnest at age 32, when he went to vote. At the polling place, he bumped into a social worker who said she knew a man with the same last name as his. It turned out to be the father he had not seen in 20 years.

Ruffin learned that his father was homeless and had hustled a job as a courier at a downtown courthouse. Attorneys who didn’t want to pay for parking or didn’t have time would pull up to the curb and hand legal documents to Ruffin’s father, who would run them into the courthouse.

Ruffin found him right away.

“He recognized me, but I showed him my I.D.,” said Ruffin, who told me he’d had a hole in his heart until that moment. “We hugged, and we’ve had a relationship ever since.”

Years earlier, Ruffin learned, his father had lost a steady job and went into a spiral. On future visits with his father and stepmother, who now have an apartment, Ruffin met other homeless people and identified with their struggle.

Hanging with them and helping them became a passion. He got a job at a homeless service center, starting as a janitor, and moved up to data input.

“One day they asked me what I wanted to be, and I said a case manager,” Ruffin said. “And the lady told me I was too stupid to be a case manager.”

There it was again. He was slow. He was less than.

But this time, he refused to accept the assessment.

“It lit a fire under me,” said Ruffin, who became a case manager a year later, then landed at Ocean Park Community Center in Santa Monica.

Six years ago he moved to Housing Works, where his new colleague and mentor was Mollie Lowery.

They clicked instantly. Lowery used to tell me with a smile that Ruffin was smart, dedicated and gifted.

Ruffin already had a natural street-side manner and knew that empathy and patience could earn the trust of clients over time. But Lowery, he says, schooled him on the finer points of working a disjointed and under-resourced system, and implored him not to take no for an answer when someone’s well-being was at stake.

Kerry Morrison, who has led efforts the last several years to focus on Hollywood’s most chronically homeless people, was worried that no one would volunteer to do the outreach for such a difficult population. She knew little progress would be made unless the social worker was willing to constantly chip through layers of bureaucracy and go to court, to jails and to hospitals well into the night and on weekends.

Earlier this year, Ruffin was honored at L.A. City Hall for his work. There’s a long way to go, but clients have been hospitalized and housed, and Morrison is praying along with other homeless advocates that L.A. County voters approve Measure H on Tuesday. The quarter-cent sales tax proposal would fund similar outreach and multiple additional services aimed at reducing an estimated homeless population of 47,000.

In December 2014, Ruffin was hospitalized after a brain aneurysm. Lowery, who was working full time while fighting the cancer that would take her life, visited him in the hospital.

“She whispered in my ear, ‘When are you coming back?’” Ruffin told me. “That motivated me to get back faster. She didn’t let being sick stop her, and I wasn’t going to let it stop me.”

Ruffin, like Lowery before him, lives austerely. He and his longtime girlfriend share a modest home in Altadena, and he said a small mortgage makes it possible for him to work in a field that doesn’t pay much. But his life is rich.

“When you help get sick, really destitute people into housing, you can’t put a price tag on that,” Ruffin said.

“You see someone get into an apartment and you know you fought the fight all the way, and didn’t take no for an answer, and they call family members and say, ‘I’m housed. I got an apartment.’

“That’s when I cry. We usually both cry, just the two of us there together.”