The Lost Tapes: The L.A. Riots 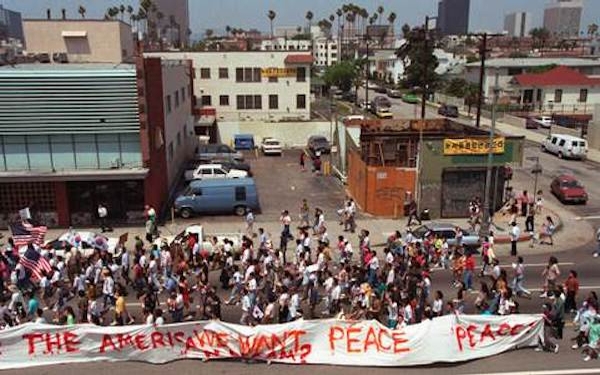 On the afternoon of April 29, 1992, the acquittal of four white LAPD officers in the beating of a black motorist named Rodney King set off an explosion of anger and frustration that erupted into deadly riots and devastated the already precarious social climate in Los Angeles. Resentment against the police, which had a reputation for using excessive force, turned the city into a war zone. This latest installment of Smithsonian Channel’s chilling series "The Lost Tapes" recaptures the chaotic days following the Rodney King verdict with powerful media coverage, home videos, gripping photographs and LAPD recordings. The documentary also includes some never-before-heard Los Angeles Fire Department dispatch calls, in which firefighters in the field are desperately pleading for police backup as they were being fired upon. The ultimate in authentic storytelling, this unique and immersive approach features no interviews or recreations – just the story as captured by video cameras and media reports at the time. "The Lost Tapes: LA Riots" premieres Sunday, April 23 at 8 p.m. ET/PT to coincide with the 25th anniversary of the events.

"The Lost Tapes: LA Riots" puts the violence of police and protesters in context. Prejudices were strong, emotions were high, police abandoned entire neighborhoods and a citywide curfew was imposed after protesters took to the streets, crying out for justice. Utter chaos ensued, and it wasn’t until the National Guard arrived that some stability was restored. After six days of rioting and looting, much of the city’s physical infrastructure had been destroyed – homes, jobs and businesses lost. More than 50 people died and hundreds more were injured and hospitalized.

In the course of making the film, Peabody Award-winning director Tom Jennings discovered that the Los Angeles Police Department had sent its own camera crews into the maelstrom. "I covered the riots, and I didn't even know this material existed," Jennings said. Another critical source was radio station KJLH in Compton, Calif., which dropped its music format and went all news and talk for three days, becoming an essential outlet for the community throughout the chaos. "It was a place that reported the riot story from the middle of the riots," Jennings said. "And it served as a haven for people in the community to call in and vent, cry and get information." Raw, emotional accounts on all sides immerse viewers into the action of a seminal event in American history - and one that remains all too relevant 25 years later.

Subsequent episodes of "The Lost Tapes" will air in 2017 timed to their anniversaries: the capture of the Son of Sam serial killer in New York City in August 1977, and the kidnapping of Patty Hearst by the domestic terrorist group the Symbionese Liberation Army, which ended in her arrest in September 1975.

"The Lost Tapes" series is produced by Tom Jennings of 1895 Films, the same team behind the Peabody Award-winning "MLK: The Assassination Tapes" Executive producers for Smithsonian Channel are David Royle, Charles Poe and John Cavanagh.

Smithsonian Channel™, owned by Smithsonian Networks™, a joint venture between Showtime Networks Inc. and the Smithsonian Institution, is where curiosity lives, inspiration strikes and wonders never cease. This is the place for awe-inspiring stories, powerful documentaries and amazing entertainment across multiple platforms. Smithsonian Channel combines the storytelling prowess of SHOWTIME® with the unmatched resources and rich traditions of the Smithsonian, to create award-winning programming that shines new light on popular genres such as air and space, history, science, nature, and pop culture. Among the network’s offerings are series including Aerial America, Million Dollar American Princesses, Polar Bear Town, The Weapon Hunter, The Lost Tapes, Mighty Ships, Mighty Planes and Air Disasters, as well as critically-acclaimed specials that include Building Star Trek, The Unknown Flag Raiser of Iwo Jima, MLK: The Assassination Tapes and The Day Kennedy Died. Smithsonian Networks also operates Smithsonian Earth™, through SN Digital LLC., a new subscription video streaming service delivering spectacular original nature and wildlife content. To learn more, go to www.smithsonianchannel.com, or connect with us on Facebook, Twitter, and Instagram.