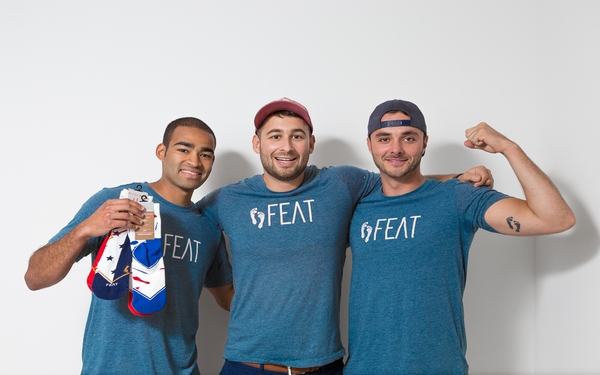 Offer, a 2015 graduate of UMass Amherst, appears in a video tracing the success of his company FEAT Socks, a lifestyle brand that got its start in a UMass classroom just two years ago.

In the video, Offer and co-founder Parker Burr ’15 recall shaping the idea for FEAT Socks in an entrepreneurship class, building the business during their senior year and signing the paperwork to become an actual company on the final day of class.

‘There’s so many people at UMass that without them, we wouldn’t be where we are,” Offer says in the clip.

The pair looped in Elijah Grundel ’14, who was already linked with Burr in another company, Promo Lacrosse. Offer and his FEAT Socks co-founders have since partnered with Olympic gymnast Aly Raisman on her own sock line — #FEATbyALY — and opened offices in Boston and Los Angeles, where they’re able to connect with major players in the entertainment and fashion industries.

So far, the video has been viewed more than 341,000 times on platforms including Facebook, Pandora, YouTube, regional news publications and connected TV.

The UMass President’s Office marketing campaign, conducted in collaboration with Boathouse Group, runs through the end of April and includes a total of six videos produced in partnership with Pilgrim Films. Four videos feature inspiring young alumni from across the UMass system, and two feature President Marty Meehan, the first undergraduate alumnus to lead UMass, who discusses the university’s impact on students and their communities.