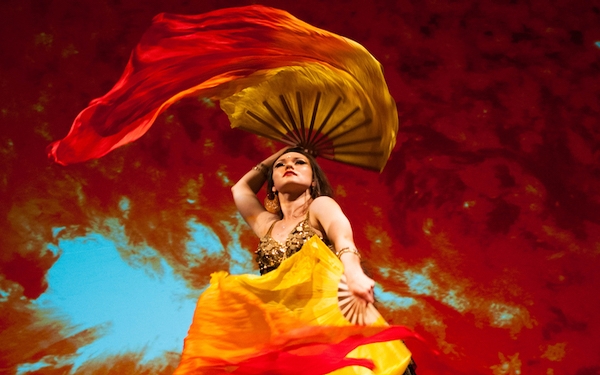 Bella Gaia, the renowned audiovisual experience lead by director-composer Kenji Williams and the Bella Gaia Ensemble, will present Bella Gaia - A Poetic Vision of Earth From Space for one night only this spring. The immersive event combines NASA satellite imagery, time-lapse nature photography, cultural heritage footage, and live performances of music and dance to form an unprecedented and powerful exploration of the beauty and interconnectedness of all things on Earth. The award-winning show will take place at Caltech’s Beckman Auditorium in Pasadena, California on Saturday, April 15, 2017. The performance will start at 8:00pm, and tickets range from $10 for children to $45 for adults. For additional information on Bella Gaia, please visit http://www.bellagaia.com/.

Rooted in the stories of astronauts who described the life-changing experience of seeing Earth from space, director-composer Williams developed Bella Gaia to communicate this same transformative sense of wonder and awe. The event’s stunning fusion of human art, scientific data, and cultural tradition guides audiences through an emotional journey that culminates with a positive message of care and respect for our surroundings and planet.

“Bella Gaia shows you how humans and nature are connected, and how art and science are connected,” says Williams. “It's an exploration of the relationship between human civilization and our ecosystem through time and space.”

Williams is joined by an all-star cast of artists, including Sound Healing vocalist and composer Kristin Hoffmann (as seen composing works performed at The Sydney Opera House, and sharing stages with The Wallflowers, Feist, and Brandi Carlile), Japanese 20-string Koto master Yumi Kurosawa (who has toured internationally with countless symphony orchestras including Suntory Hall Opening Gala with Tokyo Symphony Orchestra), dance artists Mariyah, and choreographer? Irina Akulenko, (one of the principal dancers and choreographers with Bellyqueen Dance Theater, and an alumni member of Alchemy Dance Theater).

BELLA GAIA – Bella Gaia is an unprecedented NASA-powered immersive experience that communicates without words, the BEAUTY (Bella) of the planet – both natural and cultural – and the INTERCONNECTEDNESS of all things on Earth (Gaia).

A visceral flow of unencumbered beauty manifests for all the senses by combining supercomputer data-visualizations from NASA, high-fidelity orbital views of Earth, cultural photography, and stirring LIVE performances of music and dance from around the world, with an “iridescent landscape of gossamer melodies and labyrinthine rhythms” (Nooga.com).

The award-winning Bella Gaia tells a cosmic story and explores both human and natural expressions of the Living Universe, illuminating the relationship between civilization and nature as we enter the Anthropogenic Age by visualizing our effects on the biosphere, all while celebrating the evolution of art and culture.

Inspired by astronauts who spoke of the life-changing power of seeing Earth from space, Bella Gaia successfully simulates this Overview Effect* from space flight, and makes audiences “Discover what it’s like to be an astronaut” (Washington Post). The experience leaves audiences with a transformative sense of wonder and inspiration, and the ability to see the Earth as a multifaceted yet cohesive working organism. Attendees will realize deeply and emotionally that there IS something to lose, and therefore that there IS something to preserve and to steward.

Crafted by the neuroscience-driven methodology of director-composer Kenji Williams, the transcendental effect of  Bella Gaia has been proven to generate the elusive but critical emotional response: A Reason to Care.

Kenji Williams is a composer and director for multi-media live theater, augmented reality, virtual reality, and interactive data visualization. As an Artist in Residence and Visiting Scholar at the University of Colorado at Boulder Arts & Sciences, Williams is developing a live Augmented Reality theater show titled “Origin Stories” and a transdisciplinary initiative for students and researchers.

Events
#CWABG's "How Are We Curators of the Black American Experience Now?" on 3/25 at 7PM
171 views