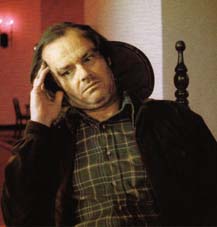 No, that's not a written imitation of the late Mr. Carson entering the stage on “The Tonight Show,” but rather the infamous, creepy phrase uttered by a deranged Jack Nicholson in Stanley Kubrick's 1980 horror-tinged thriller, The Shining .

The film stars Nicholson as Jack Torrance, a disgruntled writer who brings his wife, Wendy (Shelley Duvall) and young son Danny (Danny Lloyd) to the seemingly peaceful, somewhat deserted, snow-covered Overlook Hotel in Colorado during the winter season to work on a book. Jack's plan is to write in peace but, as this is a Kubrick film, that ultimately isn't the end result.

Instead, Danny – who is somewhat clairvoyant – discovers that the hotel itself is haunted (many years before, a custodian went crazy and killed his wife and daughters) and finds himself wandering around, seeing blood flow through the walls, and uttering another of the film's famed phrases: “Redrum, Redrum.”

Jack is deeply affected by his son's discoveries and, at the same time, is driven to the brink of utter insanity. It gets so bad that the spirits in the hotel are trying to force Jack to kill his wife and child.

On Sunday, May 28 through Tuesday, May 30, the New Beverly Cinema will be featuring a special Stanley Kubrick double feature. Preceding The Shining each day will be a showing of the famed director's equally disturbing 1987 film, Full Metal Jacket , about the dehumanizing effects the Vietnam war has on a handful of army recruits. It stars Matthew Modine, Adam Baldwin and Vincent D'Onofrio.

New Beverly Cinema is located at 7165 W. Beverly Blvd., in Los Angeles. Tickets to each double feature are $7 or $6 for students with valid I.D. There are two showings on Sunday and one on both Monday and Tuesday. For more information, visit www.michaelwilliams.com/beverlycinema.