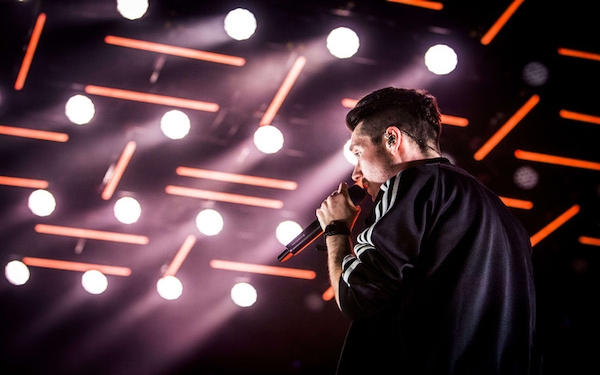 Bastille is one of Britain’s biggest bands, with two No. 1 albums in the U.K. (including the band’s newest, “Wild World”), and a string of hits that includes the international synth-pop behemoth “Pompeii.” The group has done all this while managing to remain practically invisible — rock stars you wouldn’t recognize on the high street, which is how frontman Dan Smith prefers it.

Smith grew up in London, writing songs in his bedroom; in the early ‘00s he formed Bastille with friends, in no small part because he was too self-conscious to have a solo career. In a phone interview, Smith (who is as affable a lead singer as you would ever hope to find) talked about his band’s new album, Donald Trump, and the unbearable weirdness of rock stardom. The following is an edited transcript of that conversation:

Q: The word “Bastille” has happy associations, like Bastille Day, but it was also a grim French prison.  I guess it’s also got associations of revolution and beheadings and overthrowing a regime that wasn’t particularly popular. We’ve happily adopted that, and we apologize to France for hijacking their national holiday.

There are guitars on this album, unlike your first album, where it seems like it was almost a statement not to have them. What made you decide that now was the time to bring them out?  I think it was a bit of a statement on the first record, because it was a bedroom record, and I couldn’t play guitar. It was something that when we came to record the album properly, it was a fun challenge to set ourselves. Then when we did choose to use them, obviously the guitar is such a huge instrument to everybody else, but to us it was a fun novelty, and we tried to find interesting ways to weave it into our sound without compromising what we do.

Your new song “The Currents” you’ve said has echoes of Nigel Farage and Donald Trump in it.  I never actually said it was about those people, but for me, I guess I was trying to articulate that feeling of when you hear someone, and it could be anyone, someone on TV or just down the pub, when you hear someone spouting opinions that you find quite shocking. It’s just that kind of feeling of not wanting to believe what you’re hearing. One gut reaction is to get the hell away, and it was trying to articulate that. It’s not aimed at anybody. I really like people to be able to interpret stuff in their own way, I like the ambiguity of the medium. We’re just four guys in a band trying to articulate things in a questioning way. Who are we to tell people what to think?

Do you think of Bastille as a band, or as your band?  I think we’re very much a band, and it’s wonderful to have the shared experience. I write songs, but the guys play on them, they have opinions on them, and we tour together and spend all our time together. When we started out in the U.K., there were songs that we made, we put them on the internet, and we immediately started touring the U.K. We borrowed our friend’s mum’s car, and drove ourselves around for, like, a year playing gigs in pubs and tiny little venues. In that respect, we’re pretty grass roots as a band. We’ve done all that together. It’s very much our band, and I think all the guys would say that as well.

You’ve spoken about how shy you were, but being the frontman forces you out into the world. How have you changed? Sometimes it can be a bit weird, having to be one of four people that represents this music, particularly since we made it quite privately and it’s become this public thing. That’s one of the slightly weird thing about being in a band. I think there’s some people that absolutely love attention, and I’m not necessarily one of those people, but we’re so, so lucky to be able to do this with our lives. There are certain aspects that maybe are not amazing, like having to represent us. I’m doing my best not to let that stuff affect me too much.

There’s a point in your life when you have to claim it, right? To say, this is who I am, and this is what I do?  Yeah. We’re never gonna be those guys that shout from the rooftops, “We’re in a (expletive) band!” We’re British. We’d rather just focus on making the things that we think are cool. I love it so much. I’m obsessed with being in the studio and making songs and writing songs, and, yeah, so I get a bit nervous sometimes, but who doesn’t? In important parts of (regular) people’s jobs, they feel nervous, and I think it’s important to remember that. We’re just making music. In the grand scheme of things, it’s not that important.