Octavia Spencer ‘was not going to be deterred’ 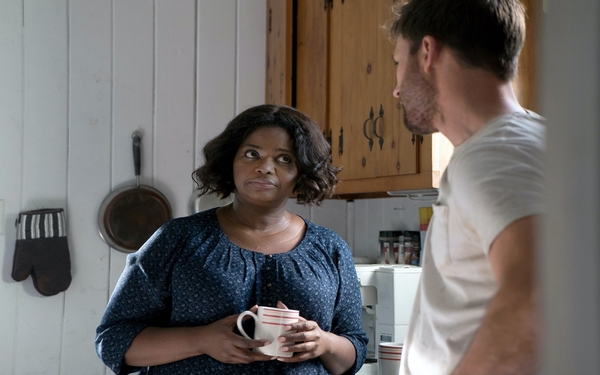 Octavia Spencer gets around. She co-starred in “Hidden Figures,” earning an Oscar nomination in the process. Last month she played God in the faith-based drama “The Shack,” then hosted “Saturday Night Live.” This fall she’ll star in Guillermo del Toro’s mysterious Cold War fantasy “The Weight of Water.” And soon afterward, she and John Hawkes will co-star as brother and sister in the dark, intense thriller “Small Town Crime,” which she produced, just as she starred in and produced Ryan Coogler’s must-see 2013 feature debut, “Fruitvale Station.” And that’s only 4 percent of her 120 acting credits in the past three decades.

Amid all that hustle, she also finds time to support colleagues she respects. Case in point: “Gifted.” She plays a surprisingly small — at least, for someone with her résumé — supporting role opposite Chris Evans. It is her second film with him, following Korean director Bong Joon-ho’s acclaimed runaway train fantasy “Snowpiercer.”

In “Gifted,” Evans plays a man raising a challenging math prodigy. Spencer is the single neighbor who gives them their needed doses of tough and gentle love. Spencer, whose expressive face is a storytelling device in its own right, showed that she’s also a singular storyteller in a recent phone call.

She started her film career when, barely out of high school, she talked her way into a job interning on the set of Whoopi Goldberg’s “The Long Walk Home,” which was shooting near her Alabama home.

“When you’re living in Alabama and thinking about working in Hollywood, the idea that Hollywood can come to you is intoxicating,” she said. “Of course, I was not going to be deterred. I was going to find a way onto that film,” even though she had no experience beyond a couple of high school plays.

Her mother imagined a career for her outspoken daughter as a trial lawyer. That option closed after Spencer was unexpectedly called to fill a supporting role on the 1996 courtroom drama “A Time to Kill.” Her presence impressed Sandra Bullock so much that she advised Spencer to move to Los Angeles. Bullock gave her a helpful nudge in 1997 by casting Spencer in her own directing debut, “Making Sandwiches,” a short that Bullock premiered at the Sundance Film Festival.

“Now if I want to be a lawyer, I play one rather than going to law school,” she joked. However, she does read her own contracts before she signs them. “I’m a puzzle person, and legalese is just one big puzzle. One tiny little word changes the whole meaning. Hereto, unto, therefore, all that. So I pay attention to the comma.”

Film, she said, was an interest of hers from an early age, but not a fantasy because “a fantasy is not something you work toward. It was a dream” — one that she now treats as concrete reality, choosing her work not on the basis of showy roles, but the appeal of the overall project.

“It’s the project as a whole. Because my part could be great but if the project sucks, I wouldn’t do it,” she said. “Whenever I read a script it has to resonate with me emotionally and have huge entertainment value and some message or social implications.”

Those considerations are what led her to working with directors as diverse as Spike Jonze in “Being John Malkovich,” Terry Zwigoff in “Bad Santa,” Diablo Cody in “Paradise” and Mike Nichols in “What Planet Are You From?”

When she read the script for “Gifted,” directed by Marc Webb (“50 Days of Summer”), she felt it was a film she wanted to help make. She was the first person to sign on although “my role is tiny. I think when people see the film, they’ll think, ‘Oh, they cut her way down.’ No, I chose the film because of the project, not because of my part.” She loved her role, but enjoyed its story about an unconventional family even more, she said.

Her on-set time with Evans was a good reunion, she said, but her scenes with 10-year-old actress Mckenna Grace impressed her more.

“The aptitude there, not everyone can do that,” she said. “You have to have some talent, and Mckenna has more than some. She’s a special child.” The extended time they spent together getting to know each other off-screen “really benefited our ability to work” in the scenes where she’s both the child’s playmate and mentor.

Spencer got a chance to indulge her mentoring instincts in December when she offered encouragement to hundreds of adolescent scientists at a White House screening of “Hidden Figures,” in which she played Dorothy Vaughan, one of NASA’s first female African-American supervisors.

“To be able to screen it for the Obamas and at least 300 or 500 young girls in STEM,” a curriculum based on the idea of educating students in science, technology, engineering and mathematics, “is one of those things I will forever be proud of and grateful for.” While she and co-stars Taraji P. Henson and Janelle Monáe, who played other NASA scientists, “knew how important the story was to us, we didn’t know how important it would be to other people. To be able to present it to those STEM students and the first family is something I will cherish forever.”

Yet, she’s had even more surreal experiences. Spencer burst into laughter at being reminded of receiving a standing ovation as she collected her Oscar as best supporting actress in “The Help.” She likened herself to Jennifer Lawrence, who slipped as she climbed the auditorium steps.

“I think they were clapping because it took me forever to get up to the stage,” she said. “My knees locked up and I had to figure out how to get them to work so I could actually walk up the stairs and actually see the Oscar. By the time I got up there they were like, ‘Well, she made it.’”