He loves shoes. So this 18-year-old Fla. student launched a line of men’s luxury footwear. 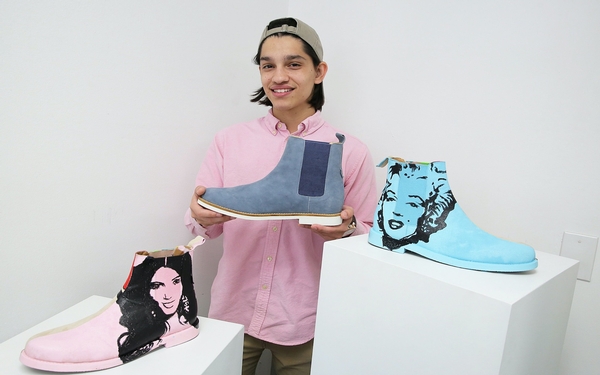 As a kid in Venezuela, Miguel Lozano helped his father make promotional products for such well-known names as Mercedes-Benz and Bacardi. By the time he was 12, he had hired himself out as a graphic designer and web developer for a barbershop, and while in high school in Orlando, he and a friend had an online sneaker boutique that sold limited edition — and high-priced — sneakers to collectors.

Now, as an encore, the 18-year-old Florida International University sophomore has launched a men’s luxury footwear line that he hopes will marry his passion for shoes with his dream of becoming an entrepreneur.

“I’ve always been into shoes,” said Lozano, a finance and marketing major. “I used to own a lot of them — at least 50 pairs.”

No longer. As a college student with limited storage space, he’s culled his collection to mostly sneakers and dress shoes. But his company, Gambino Alliance, affords him an emotional outlet. Last month he opened a Kickstarter account to raise money for his project. In less than 48 hours, he had made his goal of $20,000. The campaign ended Sunday.

The Kickstarter fundraiser was just the latest step in an almost two-year process. Lozano actually began working on his footwear line back in 2015, as a college freshman. Why not, he asked himself, design a really nice pair of Chelsea boots, something he would love to wear?

Chelsea boots are a classic, “but they’re also trending,” Lozano noted. “Everyone wants a pair.”

So Lozano did what he usually does when faced with a challenge. He dove into research online, until he found a factory in Pakistan willing to make some samples. Then he invested months in pursuit of the quality he wanted. It took 20 different tries for the factory to get it right.

“The quality of the leather is very, very important,” he explained. “Eighty percent of what’s out there is pig leather, and it’s not very good. I wanted cowhide leather. It’s more expensive, but it also feels so much better.”

He was particular about more than just the leather, though. He sent the factory back to the drawing board several times because it wasn’t meeting his design requirements. What’s more, the soles of the boots “were pretty bad. Extremely ugly.” He wanted flexible rubber soles — and something extra, too. Inspired by NASA’s use of material — a detail he picked up during his research — he added temper foam to the inside soles.

“For the best comfort,” he added.

By May 2016, nearly six months after he had first started, Lozano received a sample that met his requirements, from the stitching to the sole to the materials, all sourced from Germany and Italy. Lozano then moved on to working on another style: the classic Derby shoe. The production of this one was easier. By then he had done the research on materials for the boots and looked through the Pantone catalog to select the colors for his footwear. He decided on some of the trending hues but also “picked out a lot of what I like.”

All this effort has come with a price, of course, and it’s not just one that can be measured in dollars. Between his studies, his commitment to get Gambino off the ground, and freelancing for a children’s swimwear company, Lozano doesn’t have much time for the usual college socials.

Partying? “That’s just not my scene,” he said. “I did a lot of partying in high school already.”

Lozano originally named his footwear line “Lucky Luciano” because he wanted to evoke the fashion of the Italian mafia. The name, though, was trademarked, so he moved onto Gambino — as in one of the “Five Families” that is said to rule organized crime in New York City — and added “Alliance” to distinguish it from other businesses with the same name.

For a while, he used his savings and earnings from a short internship and freelance work to fund his new business, but the arduous process of making shoe samples wiped out his account. He landed an investor this past November, an organic food and soap distributor, after he built a website and ran the social media marketing for the owner.

With that infusion, he ordered 200 pairs of shoes, which arrived in January. He’s been sending those to influencers — that is, local and national celebrities with lots of followers on social media. So far several have posted pictures of the shoes.

Gambino Alliance’s Chelsea boots retail at $320 and the Derby at $240, but Kickstarter backers get them for discounted prices starting at $169 for the Derby and $239 for the Chelsea.

So what about the future? On top of his list is to find more investors, perhaps by launching a million-dollar Kickstarter campaign. He also figures he will limit the purchase of Gambino products to a dedicated website, at least until he comes up with a good business plan to put the product in stores.

Ultimately, though, “this can’t be just a hobby, like something I do because I like it,” he said. “It has to make sense. It has to be profitable.”

Fashion Focus
André Leon Talley’s career took him around the world, but his heart stayed in Durham
467 views

Fashion Focus
Cal U students up their wardrobe game with the help of Campus Closet
1,028 views

Fashion Focus
Financial Tips for Getting The Most out of a Shopping Spree
1,335 views

Fashion Focus
How to dress post-pandemic? Just do you.
1,179 views

Fashion Focus
Summer’s coolest dress is an instant classic. OMG, did you see this?
921 views