‘Lost City of Z’ is a riveting adventure 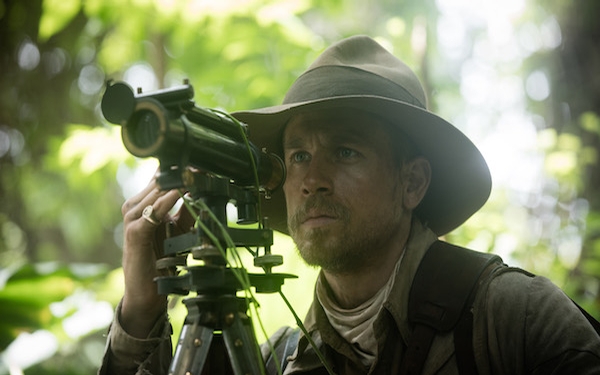 In 2005, The New Yorker magazine published a piece by journalist David Grann, a journey through Brazil, retracing the steps of English explorer Percy Fawcett, who mapped the uncharted depths of the Amazon in the early 20th century. Grann later expanded this piece into a book, “The Lost City of Z,” published in 2009, and now the cinematic adaptation of Fawcett’s adventures has been brought to the screen with a richly detailed specificity by writer-director James Gray.

Though Fawcett’s story is known, it’s almost better if one embarks on this voyage with as little knowledge about him as possible, as Gray weaves this tale of Fawcett’s incredible journey and restless soul with a sense of intimate immediacy. Charlie Hunnam stars as Fawcett, resplendent of mustache and swaggering of spirit. He’s a man with ambition beyond his circumstances, born with a poor choice of ancestors in terms of his hopes to move up in the ranks.

It’s only through sheer force of will and talent that Fawcett can establish his own good name for himself, so he takes a position on a mapping expedition to Bolivia, in the realm of Amazonia, a word that he will come to utter with the utmost reverence, like a lost lover’s name. With his aide-de-camp Mr. Costin (Robert Pattinson), Fawcett bushwhacks through the thickest jungle, tangles with cannibalistic tribespeople, barely survives piranha feedings, and develops a sort of addiction to the steamy, foreboding land, filled with the promise of mystery and discovery.

Fawcett becomes convinced that there’s a lost ancient city to be found in Amazonia, a belief that sends him back again, and again; the vision tempts him all the way to the trenches of World War I, filled with chlorine gas and bloody mud. It’s a belief scoffed at in the halls of the Royal Geographic Society, populated by pasty men in stuffed shirts who believe themselves superior to the primitive folk of the Amazon. But if anyone has a vested interest in disrupting hierarchies of power and equality, it’s Fawcett.

The film is, visually, a luscious masterpiece of gold and green — from English meadows to untouched rainforest; from daytime kissed by gentle sunlight to nighttime aglow with torches. Light filters through the mist of the South American jungle and the dusty windows of the geographic society. It’s so lushly textured, it’s as if you can reach out and touch the velvety layers of the image.

This is possibly Hunnam’s best role and best performance to date. He perfectly embodies the vim, vigor and competitiveness of Fawcett; his thirst for true discovery operating on a deep, soul-level need for tangible proof and recognition during this early 20th century arms race for hidden treasures and hidden places. He slides along a spectrum from arrogance to desperation.

Pattinson does fine character work as Mr. Costin, as does Tom Holland as Fawcett’s teen son, Jack, but the truly amazing supporting performance comes from Sienna Miller as Fawcett’s wife, Nina. She helps her husband, researches, supports and loves him, begs to go with him. She sacrifices her own independence for her family, and for his adventure. Through Miller’s riveting, heartfelt portrayal, “The Lost City of Z” etches a delicate picture underneath the colorful, wild portrait of Fawcett — of the losses suffered at home in service of greater ambitions and fantastical dreams.