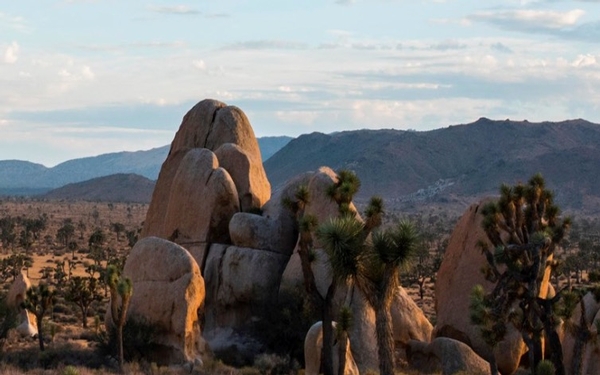 There’s only one palm tree native to California, and it’s not the one you see rising above Los Angeles.

You might call it the bastard child of the palm family, with a look akin to a shaggy monster from the Muppet world. Underneath its familiar palm fronds lies a “skirt” of their dead brethren covering the entire trunk from top to bottom.

Christopher Castro, a tribal ranger at Indian Canyons, tells me this skirt is like a condo: Insects, snakes and rodents live below, birds and bats live in the midsection and raptors prowl from up above. Thus, Indian Canyons is renowned throughout the animal kingdom as the largest condo complex of California fan palms.

We humans know it as a great place for a hike. These sprawling groves within the Agua Caliente Indian Reservation follow the contours of the region’s natural springs, which breathe life into the otherwise barren wilds of California’s low desert. As I hike with Castro along the waterways of Indian Canyons, it becomes abundantly clear how nearby Palm Springs got its name.

With its chic art galleries, boutique shops and boisterous gay bars, it’s hard to believe Palm Springs is just a 10-minute drive from this rugged wilderness. The famed desert town is my entry point into the greater Coachella Valley — a place long regarded for its luxurious resorts but lesser so for its myriad adventures.

Tourism in the Coachella Valley grew out of a quirk in early Hollywood that prevented contracted stars from venturing more than two hours from L.A.’s studios. Palm Springs subsequently blossomed into an escape for California’s rich and famous. Today the area is perhaps best known outside California for the Coachella Valley Music and Arts Festival, an event that draws 99,000 daily attendees each spring during its six-day run, April 14-16 and 21-23 this year (www.coachella.com). But this startlingly green oasis is so much more than just the setting of an iconic festival, and its attractions go far beyond the midcentury modern architecture and pool-centered resorts Angelenos flock to on the weekends.

I’ve come to this sun-kissed valley seeking its more adventurous side, and to do so, I’ve based myself at the Miramonte Resort & Spa in palm-lined Indian Wells.

The resort’s chef, Paul Hancock, explains that Coachella Valley is home to a $626 million agricultural industry, mainly in citrus fruits, sundried raisins and vegetables. He’s revamped the seasonal menus at Grove Artisan Kitchen to reflect a farm-to-fork ethos where the ingredients are sourced from the property’s gardens and nearby farms.

I take one of Miramonte’s bicycles to Shields Date Garden, 5 miles away, to try one of the region’s specialties: the date shake. This enticing milk shake of vanilla ice cream and sweet dates is perhaps never more appealing than when slurped beneath the welcoming shade of a date palm.

In the afternoon I trade two thin wheels for four thick ones to chase the famed San Andreas Fault across the valley with George Raymond of Big Wheel Tours. As we bump along in his Jeep Wrangler Rubicon, Raymond tells me that geologists call this section of the fault one of the most tortured landscapes on Earth.

It’s not hard to see why.

Gnarled rock formations rise from the desert at 45-degree angles alongside narrow slot canyons ripe for exploration and sheer cliffs painted in rainbows thanks to their prismatic mineral striations. There are also serene sections of the fault where water was forced up to the surface, creating more tropical oases of California fan palms.

We alternate between paved park roads in the Coachella Valley Preserve and rugged backcountry trails in the Mecca Hills and Orocopia Mountains wilderness areas. As we bumble along, we dig deeper into the stunning effects of plate tectonics and what happens to the land here as the Pacific Plate jams up against the North American one. Raymond says this process actually shifts the earth “at about the same rate it takes your fingernails to grow,” making this area an invaluable spot for geologists to study the effects of tremors on the earth’s crust.

On my final day, I rise into the high desert above the valley and enter Joshua Tree National Park, so named for its cartoon-like yucca trees, whose twisted branches and dagger-like leaves could have been designed by Dr. Seuss.

I’ve never been rock climbing, but Roddy McCalley of Cliffhanger Guides convinces me that this is the place to learn, thanks to the park’s other signature feature: its granitic rock piles.

Joshua Tree is the birthplace of the Stonemasters, a crew of Southern California rock climbers who pushed the sport to unseen levels in the 1970s. The routes they pioneered are now test pieces for aspiring climbers like me.

McCalley and I base ourselves in one of the Stonemasters’ favorite sections of the park, Indian Cove, to learn the techniques of slab climbing on 80-foot Pixie Rock.

“Slab climbing is like dancing,” he explains. “It’s about balance and moving gracefully on your feet.”

That’s easier said than done. But once I pick up the techniques of dancing on rock I come to appreciate the growing appeal of the sport. Rock climbing is not only a physical challenge but a mental one, too. As you puzzle together a route up the rock, you gain a visceral connection with the landscape that only comes from a duet with danger.

Coachella Valley — and the neighboring wilds of Joshua Tree National Park — offer many adventures like these for curious travelers. From meals inspired by the local larder to hiking and biking along the valley’s edge, the rewards are many for those willing to venture off-piste.