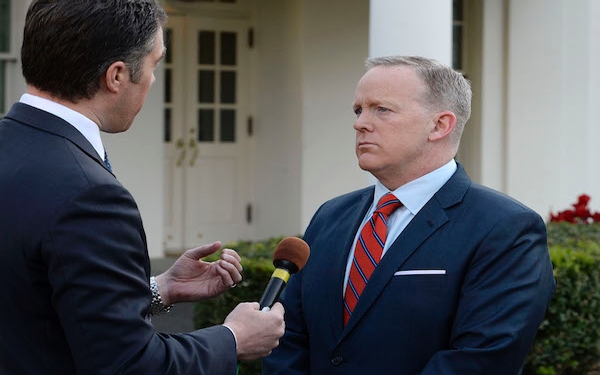 His shaky performance and attempts to clarify the remark renewed criticism of Spicer, whose future in the role is a persistent source of speculation.

“You had someone as despicable as Hitler who didn’t even sink to using chemical weapons,” Spicer said, arguing that Russia and other countries that support Assad — whom Spicer at one point referred to as “Ashad” — are on the wrong side of history.

Spicer’s rendering ignored the horror of the Holocaust, in which gas chambers were used as part of a genocide campaign that killed 6 million Jews as well as millions of others, including Gypsies and gay people.

An attempt to clarify the statement later in the briefing only compounded the problem, drawing more unwanted attention.

“He was not using gas on his own people the same way,” Spicer said. He referred to the Syria bomb victims as “innocent.”

He then added that he was aware of “Holocaust centers” — an apparent fumbled reference to death camps — and that he meant that Hitler did not use gas in the middle of towns.

The suggestion that Holocaust victims were not Hitler’s “own people” — intended or not — hit a sore nerve for Jews and other victims who considered themselves loyal subjects of Germany. Hitler’s propaganda cast them as disloyal and inferior.

There is also a painful and long history of Holocaust deniers who falsely claim, among other things, that gas chambers were not used to kill Jews.

After his own news briefing ended, Spicer attempted another clarification in written form that seemed to make a similar point.

“In no way was I trying to lessen the horrendous nature of the Holocaust,” he said. “I was trying to draw a distinction of the tactic of using airplanes to drop chemical weapons on population centers. Any attack on innocent people is reprehensible and inexcusable.”

By Monday evening, Spicer was apologizing on CNN. He called his remarks a “mistake,” a “blunder” and an “insensitive and inappropriate reference.”

In making the case against Assad, Spicer appeared to be trying to draw a distinction made in a separate briefing Tuesday by Defense Secretary James N. Mattis.

“Even in World War II, chemical weapons were not used on battlefields,” Mattis said, saying that such weapons had been disavowed internationally since World War I.

The unforced error by Spicer is one of several that have given the combative press secretary an unusually high profile. The longtime Republican communicator is regularly spoofed on “Saturday Night Live” and is often subject to speculation that Trump, who cares deeply about his media coverage, will replace him.

Spicer’s comments came on the first day of Passover, in which Jews celebrate freedom from oppression, she noted.

“While Jewish families across America celebrate Passover, the chief spokesman of this White House is downplaying the horror of the Holocaust,” Pelosi said.

This was not the first time Spicer has brushed up against Jewish sensitivities over the Holocaust. In January, he accused critics of “nitpicking” after the administration neglected to mention Jews in a statement observing International Holocaust Remembrance Day.

“To suggest that remembering the Holocaust and acknowledging all of the people — Jewish, Gypsies, priests, disabled, gays and lesbians — it is pathetic that people are picking on a statement,” Spicer said at the time, saying that the statement was written with help from a descendant of Holocaust survivors.

Trump, whose daughter Ivanka converted to Judaism before she married Jared Kushner, an Orthodox Jew, has also had uncomfortable moments in discussing hostility toward Jews. In a February news conference, Trump berated a Hasidic Jewish reporter who asked him how the government would respond to an uptick in bomb threats against Jewish centers.

Trump, who seemed to have mistook the question as a personal attack, said the question was unfair and angrily demanded that the reporter sit down.

“I am the least anti-Semitic person that you’ve ever seen in your entire life,” Trump said.