For UCLA basketball, the right class at the right time 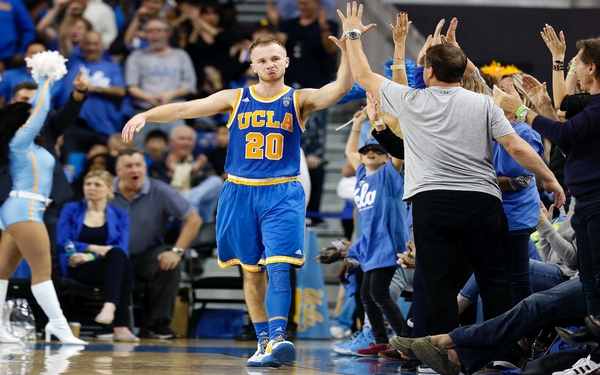 UCLA's Bryce Alford (20) high-fives fans after nailing a 3-point basket against USC in the second half at Pauley Pavilion. (Gary Coronado/Los Angeles Times/TNS)

The once-in-a-generation point guard is gone, off to the NBA after one college season. So is the power forward who could make three-pointers as easily as he beat defenders with drives to the basket.

Replacing UCLA’s freshmen and the other highly talented players leaving the program might seem intimidating to everyone, except to the people doing it.

“We’re going to try to come in and be better than them,” said LiAngelo Ball, a shooting guard from Chino Hills High whose older brother, Lonzo, revived the Bruins’ offense as well as national interest in the program before declaring for the NBA draft.

The departure of Lonzo Ball and as many as six of his teammates leaves a gaping hole that UCLA will try to fill with a six-man recruiting class that is ranked No. 2 nationally by Scout.com, trailing only Kentucky. Small forward Chris Smith, the final member of the Bruins’ class, said he expected to sign a letter of intent with UCLA during the spring signing period that starts Wednesday.

Among the newest Bruins are two McDonald’s All-Americans, point guard Jaylen Hands and small forward Kris Wilkes; a burly power forward in Cody Riley; an energetic power forward in Jalen Hill; and the middle Ball brother, a high-volume scorer with shooting range from almost anywhere inside half court.

“I feel like we’ve got talent coming in with everybody, at every single position,” Smith said. “I know a couple of the guys and I just think we can compete with anybody in the country with this class.”

“This class,” Alford said, “has a chance to be really good.”

The question is how many of the newcomers will have to be replacements instead of reinforcements.

UCLA seniors Bryce Alford and Isaac Hamilton have exhausted their eligibility, and Lonzo Ball and fellow freshman TJ Leaf said they would retain agents in advance of the NBA draft, making them ineligible to return.

The status of three other players is less certain. Freshman center Ike Anigbogu, sophomore point guard Aaron Holiday and junior center Thomas Welsh have all declared for the draft without hiring an agent, at least temporarily preserving their eligibility. They have until May 24 to withdraw their names from draft consideration.

The potential loss of so many players has left doubts about whether even a loaded recruiting class can nudge UCLA upward from a 31-win season that ended with a loss to Kentucky in an NCAA tournament regional semifinal.

“It’s going to be difficult,” said Josh Gershon, national recruiting analyst for Scout.com. “To have the expectations that they would come and replicate what that last class did in Year 1 would probably be unfair to them.”

The Bruins expect to play the same breakneck style on offense next season, regardless. Hands has already shown the ability to thrive in transition and the half court while starring at El Cajon Foothills Christian High, the same school that produced Leaf. The 6-foot-6, 240-pound LiAngelo Ball resembles his older brother only in his ability to win, once scoring 72 points in a game for Chino Hills.

“He’s his own player; I’m my own player,” LiAngelo said. “I like to score and get points up quick and he’s a team guy, he likes getting the ball in the right position.”

UCLA’s other newcomers on the wings feature length and versatility. The 6-8 Wilkes is said to be a strong perimeter defender who can also score in bunches. Smith, also listed at 6-8, can play and defend every position from point guard to power forward.

The 6-8 Riley can shoot jumpers in addition to rebound and post up. The 6-10 Hill, a former teammate of Anigbogu’s at Corona Centennial High, is a great leaper.

“Jalen can get his armpits at the rim, I swear,” Centennial Coach Josh Giles said.

Steve Alford said he hoped the freshmen could provide the depth to apply more pressure defensively, a weakness of last year’s team. It should help that the Bruins will get back guard Prince Ali and forward Alex Olesinski, who both redshirted last season because of injuries, as well as forward Gyorgy Goloman, who might have been the team’s most improved player.

UCLA’s recent recruiting success has largely been the result of a surge in local talent combined with a winning sales pitch centered on tradition, locale and the $35-million Mo Ostin practice facility that’s scheduled to open this summer. Four of the six players in the newest class — Ball, Hands, Hill and Riley — hail from Southern California.

“Over the last two years we’ve really been able to get the California kid to stay home, and why wouldn’t you?” Alford said. “I mean, UCLA’s a special place and now in July we’re getting ready to move into a brand-new practice facility. So we’ve had good momentum in recruiting and we just want to keep that going.”

College Basketball
All in the family: UC Irvine’s Spencer Rivers gets a chance to make a big splash
4,443 views

College Basketball
Beware of the upset-minded No. 13 seed, creator of many NCAA Tournament magical moments
5,060 views

College Basketball
Zion Williamson embraces the hype: ‘This is the life I wanted’
574 views

College Basketball
March Madness 2019: 68 reasons to root for the 68 teams in the NCAA Tournament
4,434 views 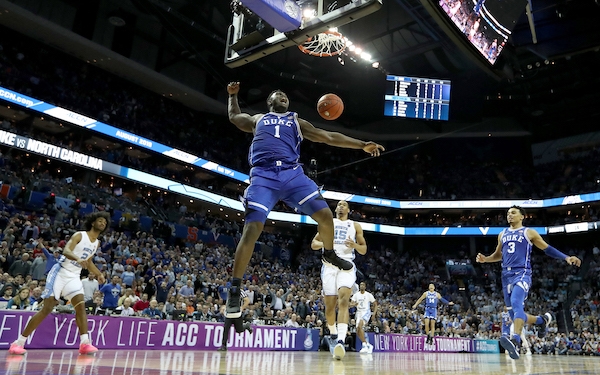