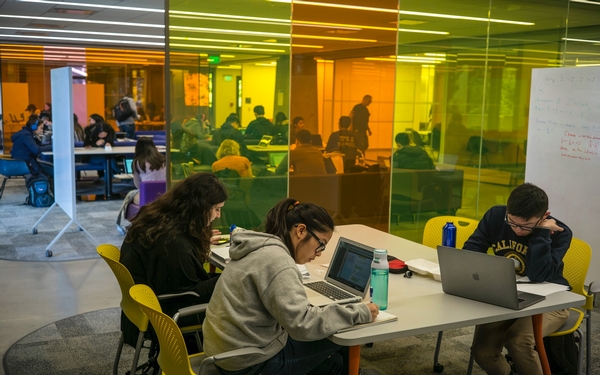 Students at the University of California at Berkeley work in a recently-renovated area of Moffitt Library. Updates have created new types of study spaces and have eliminated traditional bookshelves.

The remodeled undergraduate library at the University of California, Berkeley, is modern and sleek. Its top two floors have low-slung couches, a nap pod, and meeting spaces with glass walls made to be written on and colorful furniture meant to be moved.

The library has even dropped its rules against food and drinks on those floors. That’s because they no longer contain any books, which could be damaged or stained.

California’s oldest university has removed 135,000 books from Moffitt Library to create more space for students to study, recharge and collaborate on group projects.

Libraries are 4,000 years old, but the digital revolution is changing their use on college campuses. From coast to coast, college libraries are removing rows of steel shelving, stashing the books they held in other campus locations and discarding duplicates to make way for open study spaces. Their budgets are shifting away from print to digital materials.

The changes have met resistance. But they suit many students just fine.

Ted Xiao, a graduate student in electrical engineering and computer science, loves the changes at Moffitt. He and five classmates recently used a meeting room to work on a PowerPoint presentation. As they brainstormed, they snacked on snickerdoodles and milk tea.

Moffitt used to be so “old and musty,” Xiao said, that he visited once and never returned. Now he comes often — and doesn’t miss the books. Everything he needs is online.

“I’ve never actually needed to use a physical book,” Xiao said. “I’ve never checked one out. I can’t honestly say I even know how.”

At the University of California, Santa Cruz, however, the removal of 80,000 books from the Science and Engineering Library last summer sparked uproar—among faculty. This winter, more than 60 science and math faculty members signed a letter to university librarian M. Elizabeth Cowell, complaining that they hadn’t been adequately consulted on which books could be discarded and which ones had to be saved.

Cowell wrote in reply that she had conferred with deans and administrators, posted updates on the library’s homepage, but heard of no “significant concern.” She said all of the books that were moved or destroyed — about 60 percent of the library’s collection — were used infrequently and could be accessed online or through UC interlibrary loans.

Still, the Academic Senate approved a resolution in November to say it “condemns the dramatic reduction of the print collection” and “deplores the destruction of books.”

Richard Montgomery, a UC Santa Cruz math professor, said online access or interlibrary loans are fine for those who know exactly what they need. What’s gone is the ability to browse for ideas.

“You walk into a space that used to be a library and it’s empty,” he said. “It’s horrible. It’s like death.”

Harvard University faculty succeeded in scaling back a plan to remove about 90 percent of books and print material from the Cabot Science Library. Curtis T. McMullen, a math professor, said he fought hard to keep many of the math books, which help him solve research problems.

Administrators agreed to keep 50,000 books within reach in the library basement.

But McMullen said he accepts that print books are on their way out.

“It’s the wave of the future,” he said of digital learning. “The idea of research in a library is becoming archaic, versus Googling on the Internet. Maybe they’re not accessing the best information with what comes up on Google, but people are used to finding things on the Internet.”

The University of California, Los Angeles, was a leader in library redesign, reconfiguring a floor in the Charles E. Young Research Library in 2011 to make room for open seating, group study rooms and collaboration pods. About 18,000 volumes — half the print reference collection — were moved elsewhere, but more than 2 million books remain on other floors.

At UC Berkeley’s Haas School of Business, students led a successful charge to get rid of books. They gained traction by invoking one of the school’s mantras: question the status quo.

Hilary Schiraldi, the business school librarian, said students kept asking her, “In the spirit of challenging the status quo, why is this library filled with dusty books no one looks at and I can’t get a study space?”

They had a point, she said. After all, she now spends 95 percent of the library budget on online materials. Meanwhile, printed archives of stock prices, annual reports and directories of corporate officers have become obsolete.

Suren Dias, a senior in anthropology who works in the business library, said many students also see e-books as more environmentally friendly.

“The collections lost their purpose,” Schiraldi said. “It was time to move to a digital library.”

“Most of the world’s information is still in print,” he said, noting that online resources are widely available only in English and a few other languages. Berkeley, the world’s top public research university, collects materials in 200 languages.

“So moving toward the future is tricky,” MacKie-Mason said. “We need to do it and will be doing it quite aggressively, but we can’t destroy what we’re dependent on.”

The Moffitt Library renovation plan, 10 years in the making, initially envisioned remodeling all five floors — but the 2008 recession forced Berkeley to scale it back to two as a “demo project in what students today need,” said Elizabeth Dupuis, the associate university librarian.

The five-story concrete library was built in the Brutalist architectural style, which was popular in the 1960s but came to be regarded as “unfriendly” by students, according to Aaron Howe-Cornelison of Gensler Architecture, the project’s design firm. The firm refashioned the top floors into a warehouse-style space, with larger windows, transparent walls and higher ceilings with exposed vent ducts.

The fourth floor, called “Buzz,” is the collaborative space, where students are free to chat, brainstorm and practice presentations. They can check out projectors, iPads, laptops, chargers and dry-erase markers.

The fifth floor, “Hush,” is a quieter space with wide tables and individual study carrels with lights and electrical outlets. Three-dimensional geometric wall art is designed to absorb sound. A “wellness room” features reclining chairs and a nap pod with a top that flips down to create darkness and privacy.

Moffitt stays open around the clock Monday through Friday and during finals and midterms, and until 10 p.m. on weekends. It also has lockers for the growing number of students who live too far away to run home between classes, Dupuis said.

“In the end,” she said, “students feel comfortable and can work for very long hours.”

Berkeley being Berkeley, though, some students have panned the redesign.

Daniel Menegaz, a freshman, called Moffitt “the most ridiculed library on campus.” He said he liked the “fresh and clean look,” but finds it nearly impossible to nab a free seat. As for the open areas and meeting rooms, he thinks they’re a waste of space, and some tables are too low to use a laptop comfortably.

The absence of books doesn’t bother him. He either buys books so he can mark them up or reads them online.

“To me, libraries have just been study spaces,” he said.