How Mr. Fries Man turned his love of pastrami-topped fries into an Instagram success story 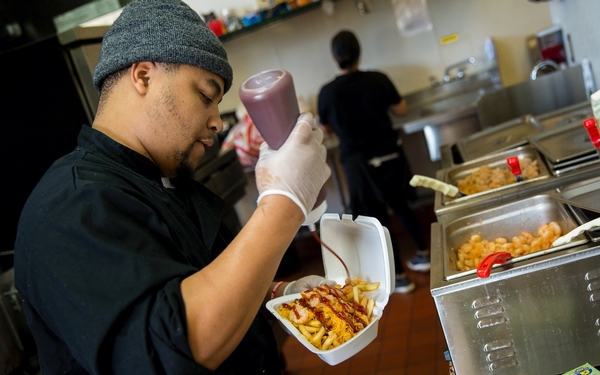 Craig Batiste, aka "Mr. Fries Man," is photographed inside his new restaurant in Gardena. Starting out as a pop-up, Batiste would post on Instagram, receive orders & set-up around Gardena for pick-up.

Craig Batiste isn’t your typical culinary superstar — he doesn’t have a resume that includes staging at any of the city’s best restaurants, he’s adamant about the fact that he isn’t a chef, and his culinary reputation is built on heaping piles of French fries topped with sauteed shrimp and lemon garlic sauce. What he does have is half of a restaurant, which he shares with a Wings N Greens in a strip mall in Gardena, and a boisterous following that includes nearly 65,000 followers on Instagram. He also goes by the name Mr. Fries Man.

On a recent Tuesday, the 31-year-old Batiste is moving around his 5-by-5-foot restaurant kitchen, conducting an orchestra of three fryers, squeeze bottles of lemon garlic sauce and fistfuls of shredded cheddar cheese while a steady line of customers snakes from the register beyond the front door. In the month since the restaurant has opened, this little storefront has become one of the neighborhood’s most popular lunch destinations.

Batiste’s Instagram fans shower him with compliments daily that include multiple fire emojis, frequent use of “drool” and “OMG” and too many of those smiling emojis with the heart-shaped eyes to count.

In January 2016, Batiste and his fiancee, Dorothy Morales, were draining the power from their Gardena home, using three fryers to make batches of French fries for friends. Morales had just lost her job as a medical tech and Batiste’s job as a merchandiser for Pepsi wasn’t going to support their family of five.

So, in his home kitchen, Batiste created what are now his most popular fries, the lemon garlic shrimp fries, along with fries covered in shrimp scampi; fries with shrimp enchiladas; fries topped with chicken, bacon, ranch and barbecue sauce; and fries with Buffalo ranch chicken. He started the Mr. Fries Man Instagram account, then started posting pictures.

“People would message me saying, ‘Where are you, I want to try that,’” says Batiste.

He and Morales shared a daily menu on Instagram, then started taking orders using a Google phone number posted on the account. People would order their fries, then meet Batiste in front of a Gardena doughnut shop to retrieve them. The business model proved improbably successful.

“We were selling like 100 plates a day,” says Batiste. “Then some guy thought we were selling drugs over there at the doughnut shop. I was like, ‘Man, we’re selling fries!’ So we had to leave.”

Batiste moved his fries operation to the parking lot of the Taco Bell on the corner of West Rosecrans Avenue and Western Avenue in Gardena before finding a more permanent location at the nearby Smart & Final, where he sold fries every Wednesday, Friday and Sunday for about 10 months.

Batiste and Morales experimented with a food truck — which lasted about two weeks before the truck caught on fire — then the couple found the Gardena strip mall location.

Before becoming Mr. Fries Man, Batiste, who grew up in Westmont, says he wanted to play football. He had his first son, also named Craig, when he was an 18-year-old senior at Gardena High and decided he needed to get a job. He became a ramp agent at LAX, then moved on to a FedEx job at the airport before getting a job at Pepsi, where he worked for a decade.

But the decision to start making and selling French fries via Instagram wasn’t too hard of a switch for Batiste, who says cooking has always been in his family. His father, Craig Batiste Sr., used to run a Los Angeles barbecue restaurant called Big’s BBQ.

So why build a business built on to-go containers of fries?

“The first fries I made, it was crazy,” says Batiste. “I made some Thousand Island sauce, some shrimp, some bacon. And I put an over-easy egg on there. Yep.”

Since starting Mr. Fries Man in that doughnut shop parking lot, Batiste has expanded the menu to include about 11 kinds of fries, some covered in snow crab, others topped with onion rings.

And regardless of your fries order, Batiste hits them with a shake of dried parsley.

“To make it look pretty, you need some color,” says Batiste, as he adds some parsley to an order of lemon garlic shrimp fries. He gives a little shimmy in his True Religion sweat pants as he tops the fries. “I learned that from the Food Network. People eat with their eyes.”