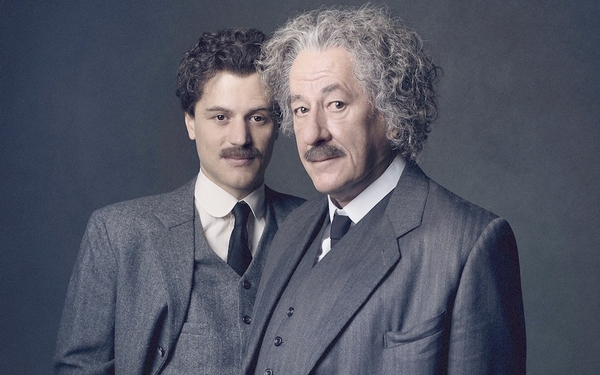 Physics geeks rejoice. Albert Einstein has his own drama series.

Everyone else? Pay attention, because you may learn something.

Einstein gets the biopic treatment in “Genius,” National Geographic’s first scripted drama. In 10 hour-long episodes, the beautifully shot and written series goes beyond what you already know — the scientific brilliance, the hair, those inspirational refrigerator-magnet quotations — for a personal look at one of the 20th century’s greatest minds.

“Genius” tracks Einstein (played in his later years by Geoffrey Rush) from his teenage years in 1890s Germany to the scientific breakthroughs that made him a global superstar to the final phase of his life teaching in the United States at Princeton.

In this telling, there are two constants in Einstein’s life: He’s always at odds with authority (professors, science luminaries, the Nazi Party, J. Edgar Hoover), and he’s always cheating on the women in his life.

“Genius” looks and feels more like an epic feature film than something you’d expect to find on a network once known for its nature specials and global-minded documentaries.

The cinematic presentation, however, makes sense, given that “Genius” was co-produced by Ron Howard and Brian Grazer and that Howard directs the first episode, premiering Tuesday. Shot in Prague, the scenery of Europe is lush.

“Genius” attempts to break down physics concepts for laypeople and clueless television critics with colorful explanations that liken complex equations to ballroom dancing, lovers tooling down wooded lanes on bicycles or a colorful fireball speeding through space.

But this is a human drama, so even if the questions Einstein poses (“Time is not absolute. Is it the same everywhere in the universe? What is time?”) hurt your brain, it’s comforting to see that the obsessively curious physicist pretty much alienates everyone else in “Genius” as well.

Except, of course, the ladies. Who knew Eequalsmc2 could be so sexy? (More on that later.)

“Genius” begins in Einstein’s teen years (played as a young man by newcomer Johnny Flynn). Here he’s portrayed as a wildly inquisitive student who challenges the dull conformity of his professors. They teach by repetition and rote, which to Einstein is like nails on a chalkboard.

He quits school in Germany, infuriating his manufacturer father, and makes his way to Switzerland, where he’s accepted into Zurich Polytechnic, but only on the second try.

There he meets one of the school’s few female students, Mileva Maric (Sa-mantha Colley). He is entranced with her because she’s the only woman he’s ever met who can debate relativity theories one minute and make love the next, among piles of books and notes.

When she becomes pregnant, Einstein is forced to join the bourgeoisie he so despises, marrying Maric and earning a living as a commonplace patent clerk. Still, he woos the scientific establishment by publishing breakthrough papers, making friends and enemies with other leading physicists such as Philipp Lenard (Michael McElhatton).

Einstein has children with Maric before divorcing her and marrying his first cousin Elsa (Emily Watson), with whom he was having an affair. The multi-tasking Einstein will continually cheat on her too, all while coming up with the theory of relativity.

Rush is a wonderful quirky, distracted and self-centered Einstein. Even as an older man, his sense of curiosity is astounding. He’s so driven by the incessant need to question that he neglects most everyone else in his life.

“For a man who knows everything about the universe,” says one mistress, “you know nothing about people.”

As the younger Einstein, Flynn is less charismatic and convincing, but he does get across the pompous egotism that comes with being the smartest guy in the Western Hemisphere.

Another historical marker during Einstein’s lifetime is the sharp rise of anti-Semitism pre-World War II. Here, it is documented in brutal though sometimes generically familiar scenes. “Genius” follows Einstein as he leaves Europe for the U.S. in 1933 while Adolf Hitler gains power.

The great unsolved mystery of “Genius” is why so many women can’t help but throw themselves at the number-crunching physicist. The series hardly portrays him as a bookish recluse, but that alone does not the cad make.

His complicated love life, however, does make for great comedic moments.

When he says to his mistress that he wants her to come live with him, she reminds him that he has a wife. He insists they can make it work. She disagrees.

“Perhaps triangular geometry is not as simple as I’d like it to be,” he mutters.

For nongeniuses, this joyful-to-watch series will answer every question you never had about space and time relativity.