How Prince revolutionized the music biz 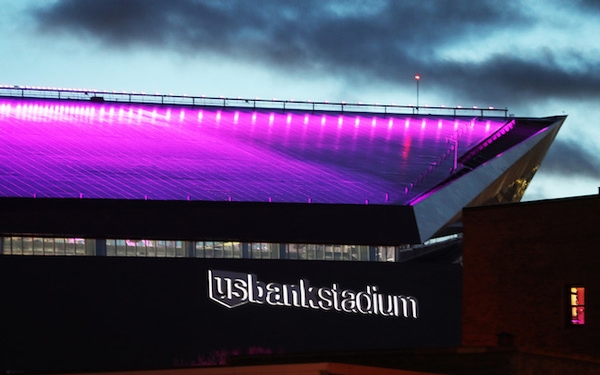 The US Bank Stadium was lit purple to mark the one-year anniversary of Prince's passing on April 20, 2017 in Minneapolis, Minn. (RIchard Tsong-Taatarii/Minneapolis Star Tribune/TNS)

His heyday band was called the Revolution, but it was Prince who was the revolutionary.

Maybe he didn’t set out to change the world. Maybe he just wanted to do things his way. But in his 39-year recording career, Prince had an impact on the world of music, popular culture and the music industry that, as Metallica drummer Lars Ulrich put it, was “immeasurable.”

Prince did everything from helping to desegregate MTV (that sounds like ancient pop history) to pioneering music distribution on the internet (his breakthrough approach seems ancient now) to fighting for artists’ rights and independence to devising inventive and alternative methods of distributing CDs.

In the context of rock history, Prince was to the 1980s what Elvis was to the ‘50s, the Beatles to the ‘60s and punk rockers to the ‘70s: He was a giant middle finger to the world, as Prince’s former tour manager Alan Leeds put it.

Prince fought conventions in so many ways. From Day 1, he strove for control of his music, gaining the unheard-of opportunity to self-produce his debut album even though he was only 18. Then he grabbed attention by shocking with provocative outfits and controversial lyrics set to irresistibly catchy music.

Like Sly and the Family Stone a decade or so earlier, Prince had a coed, multiracial band. He wanted diversity before anyone championed that notion. “Don’t make me black,” he famously told a Warner Bros. Records executive after he signed with the label. He didn’t want his race to confine him to the world of R&B. He wanted to reach a wider audience with a genre-blending and genre-defying sound.

With Michael Jackson, Prince kicked down the doors at MTV, which, when it started in 1981, was programming only rock music by white acts. Jackson’s “Thriller” and Prince’s “1999” were one-two punches at MTV’s color barriers. Moreover, his “Purple Rain” movie proved that integrated audiences, integrated bands and mixed-race couples could be everyday parts of the world, not exceptions.

“Purple Rain” was not only a sociological, musical and artistic triumph, but it sent a message that you could stay in your hometown and become an international star. There was no need to move to New York, Los Angeles or Nashville anymore.

The phenomenal success of “Purple Rain” gave Prince the license to create in overdrive and the leverage to demand that the public hear his new music. However, Warner Bros. wouldn’t change its M.O. and allow him to release an album every few months. So they were at an impasse.

‘Slave’ to the industry

Furthermore, as he learned more and more about the music business, the Minnesotan demanded ownership of his master recordings, the tapes from which albums and CDs are pressed. To underscore his point, he started appearing in public in the mid-’90s — even on TV performances — with “slave” written on his cheek.

It may have seemed petulant to the public, but the protest resonated with artists across the board — from big names such as Metallica to aspiring singers such as Aloe Blacc.

“The stance he took against record companies on the business side has been very inspiring for Metallica,” said drummer Ulrich of the metal kingpins who famously battled Napster, a pioneering peer-to-peer streaming service.

When Blacc saw Prince on TV with “slave” on his cheek, it was a wake-up call to get educated about the music business.

“I realized the industry wasn’t being fair,” the “Wake Me Up” and “The Man” hitmaker said. “I started to understand the importance of independence. The most important thing is control. That is really what the ‘slave’ comment meant. Being in control of your own destiny. Owning your music. Owning your publishing. Having your own creative control. Not worrying about the ways of the trends and what the industry is trying to push down upon you.”

Even a veteran recording artist such as “Weird Al” Yankovic was affected by Prince’s stance.

“Just the simple fact that he made his voice heard had a profound impact,” said Yankovic, who was never able to get permission from Prince to parody one of his songs. “After 32 years, my record contract ran out. I was asked to re-sign. I decided I’d just be independent because I can do everything a record label can do for me without having to give away much money. Prince was part of the inspiration for that.”

Prince fought other protocols of the industry. In 2004, he gave away his “Musicology” album with a concert ticket purchase (yes, he bumped up the ticket price to do so) and ended up with a No. 1 album at a time when he was no longer selling a lot of CDs but was still selling plenty of concert tickets in arenas. Three years later, he made a similar ploy to boost sales by giving away a copy of his “Planet Earth” CD in the Sunday edition of a London newspaper; nearly 3 million papers were sold at $3 each.

When it came to touring, Prince devised what he called his Hit N Run Tour in the early 2000s. Instead of following the industry practice of announcing an entire tour with weeks and weeks of concerts and months of advance advertising, he’d announce one city at a time — and on short notice. He had the magnetic appeal in concert to get away with it. It was an approach later adopted even more successfully by country megastar Garth Brooks when he returned to the road in 2014.

Prince was one of the first artists to use the internet to distribute music, but that lost momentum when it didn’t work to his satisfaction. Ever impatient when he lost control, he eventually began dissing the internet because of free streaming services for music and videos. He ended up sending countless cease-and-desist orders and pursuing other legal remedies. In 2015, he returned to an alternative system of peer-to-peer distribution by having fans sell his “Hit N Run Phase II” CDs on their own as if they were his independent sales reps.

“I think Prince was very aware that he was born decades too early,” said Joel Weinshanker, whose Graceland Holdings runs Paisley Park. (He never knew Prince personally.) “He foresaw the internet. He foresaw the peer-to-peer relationship. He really shepherded that and understood that better than anyone. He understood the value in ownership before really anyone else did.”

Leeds, who manages R&B star D’Angelo, knew Prince very well. He spent a decade with the Purple One, first as tour manager beginning in 1983 and then as president of Paisley Park Records, ending in ‘92.

“Prince had not just the balls to do it, but he had the autonomy to take stands,” Leeds observed. “He was not beholden to anyone else.”