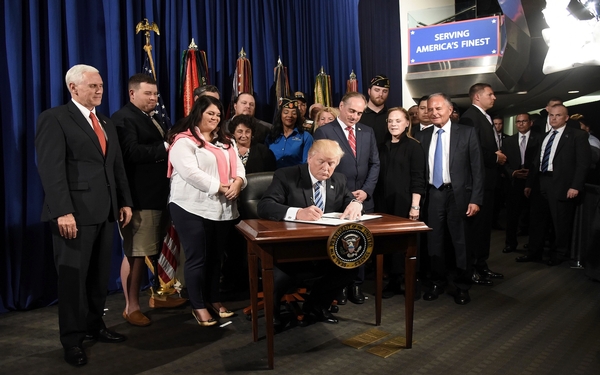 He won confirmation of a Supreme Court justice. He withdrew from a sweeping planned trade deal with 12 Pacific Rim countries. And he revived construction of the contentious Keystone XL and Dakota Access oil pipelines.

But he also failed to persuade his fellow Republicans to repeal and replace the Affordable Care Act. He tried to halt travel to the United States by citizens of six majority-Muslim nations, but was stopped again and again by the courts. And he was forced to fire his national security adviser for lying to the vice president.

In his nearly 100 days in the White House, President Donald Trump has seen his share of ups and downs on a host of domestic and foreign policy issues, from illegal immigration to Syria, taxes to China and everything in between.

And whether you’re one of his supporters or part of the so-called resistance you can probably agree on this: The brash, Twitter-friendly reality-TV star turned commander in chief has managed to leave everyone wondering what he will do next.

“The one word that defines all conversations throughout the United States and many capitals of the world is ‘Trump,’” said Ken Duberstein, who served as President Ronald Reagan’s chief of staff.

Trump has repeatedly mocked the 100-day benchmark, complaining he would be accused of failing no matter how much he accomplished. Yet he spent the final week before Saturday’s 100th day rolling out executive orders and policy proposals in a furious finish to the deadline.

“I’ve done a lot. I’ve done more than any other president in the first 100 days,” Trump told The Associated Press in an interview late last week. “The foundations have been set to do some great things.”

Trump promised to act fast — and he has — though he has done far less than he promised on the campaign trail when he outlined dozens of things he wanted to do in the first 100 days, many on day one. He even released a “Contract With the American Voter,” a 100-day action plan to “make America great again.” But after the election he streamlined his list, and many items remain undone as the president learns how long action takes in Washington.

William Galston, a former policy adviser to President Bill Clinton who’s a senior fellow at the Brookings Institution, a center-left policy research center, gives Trump a “C-” based on what he accomplished with his executive orders, legislation and policy proposals. “They were substantially unprepared for challenges at home and abroad,” he said.

Still, Trump has engaged in a flurry of activity from the first day — though some people argue that some of the moves have been more cosmetic than substantive — signing 28 bills into law, issuing 24 executive orders and ordering at least 17 studies on everything from election fraud to the Iran nuclear deal.

By far, his biggest accomplishment was the selection and confirmation of 49-year-old Neil Gorsuch, who with a lifetime appointment to the Supreme Court could be ruling for decades on everything from the death penalty and searches-and-seizures to the scope of the president’s war powers. Trump is the first president to get a Supreme Court nominee confirmed in the first 100 days since 1881.

Trump launched a military strike in Syria after President Bashar Assad used chemical weapons that killed dozens of civilians. He dropped the most powerful non-nuclear bomb in the U.S. arsenal on the Islamic State in Afghanistan. He secured the release of aid worker Aya Hijazi from an Egyptian prison. He has befriended China and angered allies Mexico and Australia. He’s stepped up deportations, seen a decrease in border crossings and tried to boost military spending.

And with little attention, the president has quietly implemented some of his most significant changes through dozens of federal agencies and departments.

He has chipped away at the privacy rights of ordinary Americans at the borders and at the computer screens. He has increased searches and seizures of electronic devices carried by travelers entering the country. He has repealed provisions that would have prevented broadband providers from selling data about the browsing habits of internet users. He has refused to protect foreigners visiting the United States from surveillance.

He has made science a lower priority. He has yet to appoint a science adviser. The Office of Science and Technology Policy is a quarter of its former size. He has proposed a budget that calls for deep cuts in federal science agencies, particularly those involved in climate-change research.

And he has kept Americans in the dark about some of his actions. He won’t reveal which federal employees received waivers allowing them to bypass ethics rules. He hasn’t released full details about military operations around the globe. He refuses to say who is visiting the White House.

“I think he has changed government more than a lot of people know,” said Scott Jennings, political director for former President George W. Bush, who gives Trump an “A” grade in large part for “restoring American leadership on the world stage.” “A lot of very consequential things get virtually no attention.”

Many of Trump’s actions have fulfilled Republicans promises, now that the GOP controls the White House and both chambers of Congress, while others have merely undone the actions of his Democratic predecessor, Barack Obama.

Trump’s administration has delayed or outright repealed a multitude of Obama-era regulations that affect everything from workers’ exposure to cancer-causing substances to hunters’ right to kill bear cubs in national wildlife refuges.

It has relied on a combination of administrative actions and a rarely used federal law, the Congressional Review Act, which allows lawmakers and a president to reverse regulations imposed recently by a previous president. Trump has used the law 13 times so far. It had been used only once before, by George W. Bush.

The president’s critics say the rollback of consumer and environmental protections, financial regulations, worker safety measures and other rules show the administration has thrown over the interests of ordinary Americans — and Trump voters — in its rush to make good on a wish list for big business.

“Just because legislation is not being passed doesn’t mean that this government isn’t harming consumers,” said Micah Hauptman, financial services counsel at Consumer Federation. “There are real consequences to what this administration is doing … . It’s hard to know what you’re missing when you haven’t tangibly felt the benefits but that doesn’t mean you weren’t going to get the benefits.”

All the while the president has endured endless scrutiny about infighting and dysfunction among his staff at the White House and an FBI inquiry into possible collusion between advisers to his election campaign and Russia. And he been hampered by his lack of staff.

Trump entered the White House with the lowest approval rating of any president in modern history and not much has changed since then. His supporters are largely satisfied with his performance, insisting he has kept his grandiose promises, though many haven’t been fulfilled, but he has not managed to win over new supporters.

“It’s an appropriate time to take stock of what this president has accomplished so far. Unfortunately, it’s not much,” said Senate Minority Leader Chuck Schumer, D-N.Y. “In the first 100 days, so many of the promises the president made to working families during the campaign have either been broken outright or remain unfulfilled.”

White House Chief of Staff Reince Priebus told reporters this week that Trump has had a successful first 100 days.

“He’s accomplished so many of his goals,” he said. “I know there are narratives out there that say otherwise. But we look at it and see a president working at breakneck speed, somebody who is going as fast as he can within the confines of the law running through that punch list of promises that he made during the campaign.”