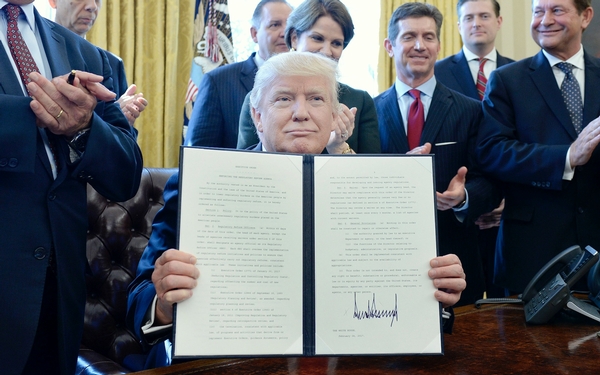 U.S. President Donald Trump, flanked by business leaders, signs an executive order establishing regulatory reform officers and task forces in US agencies in the Oval Office of the White House.

President Donald Trump’s first 100 days in office have been defined more by what he’s undone than what he’s done.

Gone, with the stroke of Trump’s pen or publication of a memo, are a host of Obama-era rules aimed at protecting consumers and workers.

A policy that limited student loan fees is out. So is a rule against internet providers selling consumer data without the user’s permission and one that prohibited states from withholding federal funds from Planned Parenthood. And so on.

Trump may have been thwarted so far in his bid to repeal Obamacare, restrict travel from majority-Muslim nations or build a wall on the southern border. But he’s been a rousing success in his little-noticed but aggressive drive to undo rules and regulations imposed during the presidency of his predecessor, Democrat Barack Obama.

“We’ve lifted one terrible regulation after another at a record clip, from the energy sector to the auto sector, and we have many more to go,” Trump said last week.

Since Inauguration Day, the Trump administration has delayed or outright repealed a multitude of Obama-era regulations that affect everything from workers’ exposure to cancer-causing substances to hunters’ rights to kill bear or wolf cubs in national wildlife refuges.

—Employers can no longer be held accountable for keeping accurate workplace injury records for at least five years.

—Student loan companies can levy hefty fees on borrowers trying to get out of default.

—Internet service providers can collect and sell information about customers’ browsing habits without their permission.

—About 75,000 mentally ill people determined by the Social Security Administration to be incapable of handling their own finances won’t be barred from purchasing guns.

—Coal companies don’t have to obey new restrictions on pollution, nor do they have to monitor water quality in nearby streams.

—Federal contractors won’t have to disclose safety, health and labor violations prior to being awarded government contracts, a requirement companies have criticized as a “blacklisting rule.”

—Financial advisers get a reprieve from stricter standards designed to prevent conflicts of interest when they make investment recommendations to people saving for retirement.

To make the biggest impact as quickly as possible, Trump’s administration has relied on a combination of administrative actions, in the form of memos or policy pronouncements, and what had been a rarely used federal law, the Congressional Review Act. The law allows members of Congress to override an outgoing administration’s recently issued federal regulations with a simple majority vote and the president’s signature.

Before Trump took office, the 1996 law had been used only once, by President George W. Bush to revoke ergonomics standards put into place under President Bill Clinton.

In his first 100 days, Trump, working with Republicans in Congress, has used the law to kill more than a dozen Obama regulations, many of which had taken years to put into place.

The consequences are far reaching because the Congressional Review Act prohibits any “substantially similar” regulations from being issued ever again without Congress’ authorization.

The law doesn’t apply to rules that weren’t recently issued, however. In those cases, the Trump administration has kept the rules from going into effect, at least temporarily.

That’s what happened to two regulations issued by Obama that dramatically lowered legal limits on workers’ exposure to silica and beryllium, both cancer-causing toxins. In both cases, the Trump administration pushed back the deadlines for companies to comply with the new safety measures.

Semanario said unions also worried that the Trump administration would decline to defend the exposure limits in legal battles with industry, as it already had done with other Obama-issued rules.

The White House says Trump’s actions follow through on his campaign pledge to do away with costly and job-killing regulations in order to boost economic growth. That means not just revoking or freezing existing rules, but also discouraging the creation of new ones.

To that end, Trump signed an executive order that requires agencies to eliminate two rules for every new one created.

“President Trump is setting the tone for a new era of government regulation through his historic deregulatory agenda, from his ‘1 in, 2 out’ executive order to the unprecedented number of legislation signed under the Congressional Review Act,” Natalie Strom, a White House spokeswoman, said in a statement. “The Trump administration will continue to take a hard look at regulations until our system better serves its dual roles of protecting the environment while maintaining a thriving economy.”

Trump’s critics say the rollback of consumer and environmental protections, financial regulations, worker safety measures and other rules show the administration has thrown over the interests of ordinary Americans — and Trump voters — in its rush to make good on a wish list for big business.

“Donald Trump has asked America’s CEOs for marching orders, and in meeting after meeting, they are happily issuing instructions,” said Robert Weissman, president of Public Citizen, an advocacy group that estimates Trump has met with at least 190 corporate executives since his inauguration.

To the Trump administration, however, federal rules are fair game when power changes hands.

The White House’s National Economic Council director, Gary Cohn, told the audience at the Institute of International Finance last week in Washington that the administration expects to be able to continue cutting back regulations though changes to personnel and policy at federal agencies — largely without Congress’ help.

“Personnel is policy,” Cohn said. “Changing personnel will have a big effect on a lot of the regulations we have in the system.”