San Francisco celebrates 50th anniversary of the Summer of Love 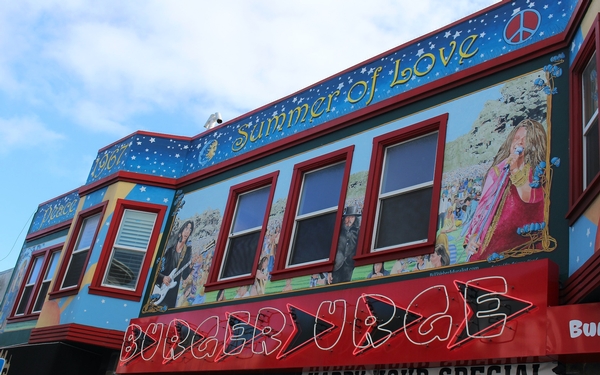 For locals, it might be a burger joint, but rock fans here to eat up the neighborhood's Summer of Love history will be drawn to the exterior artwork at Burger Urge, at Haight and Clayton streets, step

This year marks the 50th anniversary of the 1967 Summer of Love. There will be many stories written and told about it. This almost certainly will be the only such story that won’t mention singer Scott McKenzie and the John Phillips lyric, “If you’re going to San Francisco, be sure to wear some flowers in your hair.”

While the original “Summer” was happening, San Francisco wasn’t quite sure what to do with it, but, in general, it coped. So in 2017, it’s celebrating.

What was the Summer of Love? It was many things, but the shorthand version: In 1967, thousands of young people from throughout the U.S. — many of them hippies or those who would be hippies, lured by visions of unrestrained access to a variety of pleasures, some of them hallucinatory and others more organic — descended on San Francisco’s Haight-Ashbury neighborhood and environs for the summer to share it all with like-minded folks. Some had flowers in their hair.

Upper estimates of how many actually showed up approach 200,000, but no one seems to really know.

“They fly over on Saturday and take a picture, then fly over on Sunday and count everybody twice,” he says. “You know that half those people hadn’t moved in 24 hours …”

For sure, it was a lot, remarkable at a time when the dominant interstate communication device was still a rotary dial telephone.

By the end of August, most had staggered back to school. But the impact of the event has been debated for … well, for 50 years. Naysayers will have their nay, but Dennis McNally, San Francisco-based author, historian and longtime publicist for the seminal band of the era, the Grateful Dead, says this:

Rick Kaplan, who in 1967 was a 14-year-old San Franciscan and at 64 is still (literally) in recovery: “We changed the world. Period. We changed everything.”

The 50th anniversary celebration of the Summer of Love actually began in the Winter of Last Year with retrospectives and forums and exhibitions all over the area. They’ll continue through the Summer of This One.

Some of the commemorations will be as appropriate as a 50th anniversary edition of the Monterey International Pop Festival, on the same dates (June 16-18; www.montereyinternationalpopfestival.com) and on the same stage as the original that spotlighted Jefferson Airplane, Jimi Hendrix, The Mamas & The Papas, The Who, Big Brother and the Holding Company (with Janis Joplin), Otis Redding, the Grateful Dead and many, many more. (Most of the original performers, due to fate, will be no-shows this time.) It was that festival that drew thousands — an accurate count, again, is elusive — and pretty much set everything else in motion.

And some commemorations will be, well … “Summer of Love Blanket Day” at AT&T Park (a ballpark that didn’t exist in 1967) will be on June 25. The first 20,000 fans will get a blanket before the San Francisco Giants play the New York Mets.

For a complete schedule of all that’s going on, including the de Young Museum’s new exhibit, “The Summer of Love Experience: Art, Fashion, and Rock & Roll,” check out www.sftravel.com/summer-love-2017. Another good resource comes courtesy of the California Historical Society: www.summerof.love.

By most accounts, the Summer of Love was a memorable, and for many even a joyous, few weeks. We still see institutions here that were born then of necessity and compassion:

A free health clinic, first of its kind for the U.S., was created to deal with overdoses, conventional sickness and other things.

“Most of these kids,” said Flouride, “were kids with no sense of urban survival.”

The Haight Ashbury Free Clinic is still serving the community.

A former mime troupe called The Diggers established free-food centers that summer, and others carry on the tradition. Another Diggers invention, a street-cleaning program in the Haight that traded light maintenance work for shelter and food for the homeless, lasted decades, and was revived and expanded in 2014.

Says Sunshine “Sunny” Powers, a shopkeeper (Love on Haight boutique), spreader of glitter and member of the Taking It To The Streets (TITTS) board: “Anyone you see in an orange vest cleaning the street is a homeless youth.”

Other programs endure. On the downside, there were kids who were swept up by the scene who maybe weren’t ready for it. Kaplan was one of them.

“I loved it. Loved it,” he said during a rest break at the hallowed Fillmore, where he was grooving to spirited live rock from Hot Tuna. “I became a total Deadhead. I’ve probably seen the Grateful Dead 500 times.”

“I’m a recovering drug addict,” he said. “I was an everyday crack addict for 12 years. I should be dead.”

The story of the Summer of Love, like so many things that summer, defies orderliness. A reasonable chronology would begin with the Beats — poets and authors and philosophers and lovers of jazz and espresso (Ginsberg, Kerouac, Cassady, Rexroth and more) — who in the 1950s first settled in the North Beach neighborhood, then found in Haight-Ashbury cheaper rents, fewer tourists and that traditional San Francisco tolerance.

They were joined in the neighborhood, eventually, by artists, musicians and entrepreneurs, some of them legit. By the mid-1960s, Haight-Ashbury’s sometimes-wobbly but affordable housing was occupied by as many people as they could accommodate. The neighborhood had a vibe.

The Grateful Dead, not yet rich or famous, took over a house on 710 Ashbury St. For a time, Janis Joplin lived with her girlfriend up the street, at 635. Others in the neighborhood, at various intervals: Patty Hearst, Charles Manson, a relatively conventional Danny Glover, Country Joe McDonald, Jimi Hendrix, Sid Vicious. Grace Slick. Hells Angels.

Anissa Jones, cute little Buffy on “Family Affair,” overdosed there (but survived, this time). Ballet stars Margot Fonteyn and Rudolf Nureyev were at a pot party raided by police there.

And onto these streets, in one memorable summer, came 60,000 or 100,000 or 200,000 young people seeking reinforcement or new friends or new sensations. And what a summer it was.

“The city is really going to celebrate the anniversary,” McNally says. “An element of that is nostalgia. There’s still plenty of 70-year-olds alive who actually remember it.”

Some of them may even have some flowers in their hair. If they have any hair left.

(Alan Solomon is a freelance writer.)