Larry Page’s flying car will go on sale this year 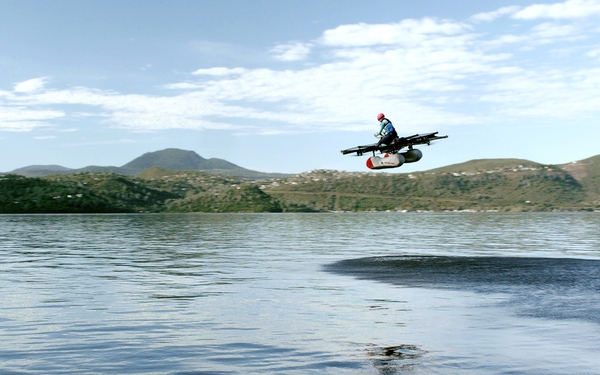 Cimeron Morrissey, an outdoor sports enthusiast and freelance writer, flies the Kitty Hawk Flyer prototype. The Flyer is scheduled to go on sale by the end of the year, although it will have a differe

The Kitty Hawk Flyer, an electric flying vehicle, will be available by the end of the year, the Larry Page-backed Mountain View startup said recently.

But it will land on water, not on a road near you.

Sebastian Thrun, the computer scientist who led the development of Google’s self-driving car, is CEO of Kitty Hawk. He tweeted the following:

— Changing the future of personal transportation. Join us @kittyhawkcorp to get information about #theFlyer prototype http://bit.ly/KHflyer

The startup released photos and a video showing the flying jet-ski-like prototype, although it said the flyer that will be available for sale this year “will have a different look and feel.”

Kitty Hawk did not release a price for the flying vehicle, but a cool $100 will buy you a three-year membership and give you “priority placement” on the waiting list to buy one. And you get a $2,000 discount to boot.

In case jet ski-like isn’t technical enough for you, here are more details, courtesy of a spokeswoman and the startup’s website:

The Flyer is an ultralight aircraft or octocopter that needs no runway because it takes off and lands vertically. Kitty Hawk says it can “hold an altitude of up to 15 feet” and is designed to fly over fresh water.

Because the Flyer operates in the FAR 103 Ultralight Category of US FAA regulations, you don’t need a pilot’s license to operate it. It doesn’t need to be registered, either, and may be flown in uncongested areas, Kitty Hawk says.

Cimeron Morrissey, the pilot of the prototype, wrote in a Medium post that she had “never piloted a toy helicopter, let alone a real airplane.

“I feel like the Flyer and I are one. I nudge the pitch knob forward and rocket across the lake,” she wrote in a description of her experience. “I feel light and ecstatic and utterly free. This is just like my flying dreams!”

It’s all thanks to the flying dreams of Google co-founder Page. He has reportedly spent $100 million or more on flying-car startups, including Zee.Aero, whose flying car was spotted in Hollister in October.

A spokeswoman for Kitty Hawk said that Zee.Aero is a division of Kitty Hawk.