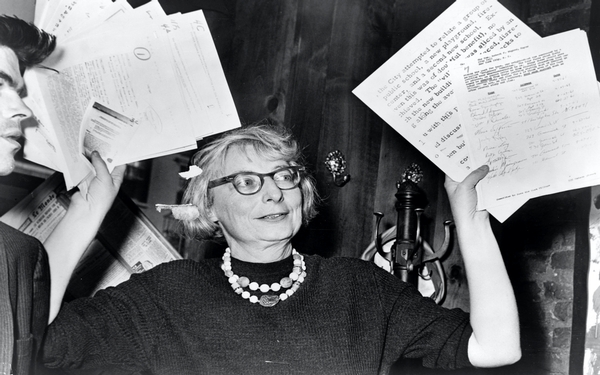 Anyone seeking a demonstration of how completely orthodoxy and heresy can change places need look no further than the brisk documentary “Citizen Jane: Battle for the City.”

That Jane is Jane Jacobs — journalist, activist, author of the landmark 1961 book “The Death and Life of Great American Cities” — whose pro-neighborhood, pro-street life thesis that “no logic can be superimposed on a city, it is people who make it” is so completely accepted today that it’s instructive to realize how far out of the mainstream it was once considered.

That mainstream was forcefully represented by city planner par excellence Robert Moses, perhaps the most powerful unelected official in New York City history. Supremely unconcerned about the multitudes of people his projects displaced, Moses was a fervent believer in the school of urban renewal that insisted you can’t make an omelet without breaking eggs.

Brusque, patrician, used to getting his way, Moses (memorably depicted in Robert Caro’s magisterial biography “The Power Broker”) saw urban renewal as a chance to, as one of the film’s experts says, “take a carving knife to clear away the cancerous tissue.” For Jacobs, however, urban renewal was “not the building of cities but the sacking of cities.”

As directed by Matt Tyrnauer, whose last film was the excellent fashion-oriented “Valentino: The Last Emperor,” “Citizen Jane” works best as a broad general introduction to this clash of titans, with Marisa Tomei reading Jacobs’ words and Vincent D’Onofrio doing the honors for Moses.

Filled with interviews with academics and urban theorists (sadly, Caro did not participate), the film delineates the rise and fall of conventional urban planning but also lets us know that the battle is not completely over.

Especially interesting for those who believe that battles are not always black and white is the information “Citizen Jane” provides about Moses and the modernists. The man himself, it turns out, started as a progressive who wanted to make things better for impoverished slum dwellers and made room for parks and beaches for that purpose.

The film also posits that while some of the theory behind urban renewal began with the visionary Le Corbusier, he has been misinterpreted. Fellow architect Robert A.M. Stern points out that Le Corbusier intended the massive towers in his theoretical projects to be for offices, not for the housing projects they came to be used for.

As architecture critic Paul Goldberger summarizes, urban renewal zealots such as Moses “didn’t understand what they were giving up,” didn’t see that the projects they were building could be worse than the slums they replaced — until Jane Jacobs.

A journalist before she was an activist, Jacobs began as a writer for Architectural Forum who wrote approvingly of the Society Hill development in Philadelphia. When local residents avoided its shopping areas, she began to feel that maybe the experts didn’t have all the answers.

Jacobs lived on Hudson Street in Manhattan’s West Village and the accident of history that several of Moses’ major projects would have affected her directly was one of the factors in triggering her brilliant activism.

The first round in Moses versus Jacobs came in 1955, when the planner decided he wanted to extend Fifth Avenue right through the heart of much-loved Washington Square Park. Jacobs, never deferential to power, strategized to stop him, using the power of local residents, a technique Moses in exasperation called “a bunch of mothers,” to kill the project.

In 1958, when Moses decided to earmark the entire West Village for urban renewal, Jacobs outmaneuvered him to stop that from happening. The same thing took place a few years later, when, undeterred by the 17 years it had taken to get the Cross Bronx Expressway approved and built, Moses decided to push a similar project for Lower Manhattan. He did not succeed.

Jacobs spent the last years of her life in Toronto, where she was drawn into, inevitably perhaps, a fight to block yet another expressway. And though the battles she fought may seem like ancient history, reports from around the world, like one from Asia noting “China today is Moses on steroids,” indicate otherwise.

‘CITIZEN JANE: BATTLE FOR THE CITY’