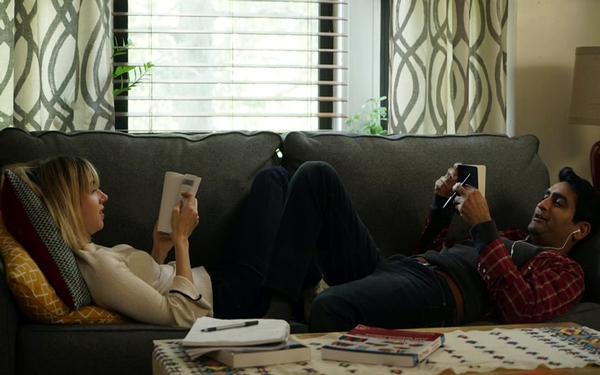 When he was 18, Kumail Nanjiani emigrated from Karachi, Pakistan, to Iowa to go to college. Four years later his parents came to the U.S., settling in New Jersey.

Nanjiani welcomed the thousand-mile buffer zone, not because he didn’t love his parents but because they expected, per traditional Pakistani culture, that they’d soon be finding a young woman for him to wed in an arranged marriage. His mother wasn’t letting distance deter her either, emailing Nanjiani pictures of prospective matches, some of whom he knew from Karachi.

Nanjiani had no intention of letting his parents dictate his choice of a romantic partner. But he also had no idea how to broach the subject with them.

“I was really scared of visiting them because I knew they were really into it,” Nanjiani, best known for his work on the celebrated HBO comedy “Silicon Valley,” reveals in the garage office of the Los Feliz home he shares with his wife, Emily V. Gordon.

Nanjiani mined that cultural conflict in “The Big Sick,” a movie he wrote with Gordon about their real-life rocky romance, a relationship that faced numerous hurdles, including a serious illness and the specter of familial betrayal. The film premiered to great acclaim at Sundance in January, sparking a bidding war that resulted in a $12 million sale to Amazon Studios.

“The Big Sick” (in theaters June 23) upends expectations at every turn, beginning as an engaging romantic-comedy and then becoming a sometimes harrowing (but still funny) and deeply personal drama that takes in cultural assimilation, growing up and medically induced comas. Nanjiani stars, portraying a version of himself, with Zoe Kazan playing the Emily character.

The movie’s most dynamic element might be the spot-on specificity of its Pakistani family, including the devout Muslim parents (played by Zenobia Shroff and Anupam Kher) and a brother (Adeel Akhtar) happily married to a wife (Shenaz Treasurywala) he met through an arranged marriage. They are by turns caring and disapproving, funny, weird and exasperating — in other words, a typical family.

“We knew from the beginning that the movie would be good or bad depending on the family,” Nanjiani says. “If we show a truly loving family, then the stakes for the relationship are that much higher. If it’s a family that’s strict and cold — which is what you see from stereotypical portrayals of Muslim families — then it’s going to be a disservice, both to my actual parents and to the movie itself.”

The events depicted in the film took place a decade ago. Shortly afterward, Nanjiani, 39, realized he had spent years defining himself by rejecting his Pakistani heritage. He still struggles with his identity. He doesn’t feel American, and he doesn’t feel Pakistani. But through his writing as a comedian, he’s continuing to get a handle on how he fits in with American culture.

Certainly, Nanjiani’s work both as a writer and star of “The Big Sick” represents a significant step forward in representing Muslim culture on screen.

Producer Judd Apatow, who worked with Nanjiani and Gordon for three years honing the script, believes the movie’s truthful depiction of the immigrant experience is essential in the current, heated political climate.

“We didn’t make the movie to be political at all, but I’m glad at this moment that this movie exists,” Apatow says. “I’m also glad we didn’t make it in this environment because maybe we would have done it differently. It doesn’t have a chip on its shoulder in any way. It’s just showing a normal, loving family. It’s unfortunate that there have been so few portrayals of Muslim families in America.”

Nanjiani’s parents haven’t seen the film yet. Premiering it at Sundance was stressful enough without adding another layer of anxiety.

“But we’ve already had the awkward conversation — one of many awkward conversations,” Nanjiani says. “I’m still trying to figure out how to have an adult relationship with my parents. The movie ends with the first step. I’d like to think we’ve taken a couple of more in the past 10 years.”