Virtual reality’s cousin generating lots of buzz as Facebook, Apple, others focus on it 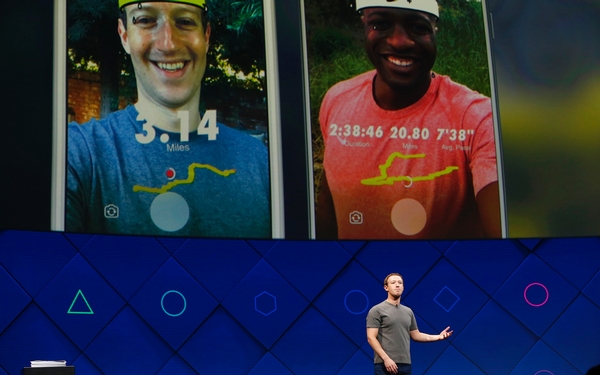 Last year, virtual reality generated lots of buzz. This year, the buzz is around a different kind of “reality” technology that could end up being more popular and useful.

That technology is dubbed “augmented reality” and it involves layering virtual information over views, images or videos of the real world. It could be something as simple as adding a virtual ballcap to a picture you’ve taken or as sophisticated as identifying on a screen in real time the person across the room and the place you are in.

Though it’s been around for years in various forms, augmented reality, or AR as it’s commonly known, is starting to draw heightened interest from the tech industry. Among the more recent developments:

— The technology was the was the centerpiece of Facebook’s developer conference in San Jose recently, and the company added some AR effects to the camera feature in its smartphone apps.

— Apple is reportedly investing heavily in it, and the company just released a video recording app called Clips that has some AR effects built into it.

— Asus is planning on releasing a phone later this year that will support Google’s Tango augmented reality technology. It would be the second Tango-compatible phone, following one Lenovo released last year.

— And Microsoft has been touting an AR headset called HoloLens. It’s already shipping an early version to programmers interested in creating applications for it.

You may not have heard the term augmented reality, or AR, before, but there’s a decent chance you’ve encountered the technology. “Pokemon Go,” the big hit from last summer, is an example of an AR game. The virtual filters and stickers you can add to photos in Snapchat are a kind of AR. So too, are the virtual lines you may see on your car’s infotainment screen that show you where you are heading.

But early versions of the technology have actually been around for years. Apple’s iChat, the messaging program it used to ship with its Mac computers, had a feature that allowed users to swap out the real scene behind them with a virtual background to make it look like they were on a beach or in Times Square. Nokia released a Windows Phone device five years ago that had software that identified in real time buildings and other objects it saw with its camera. And Google Glass, the search giant’s controversial headset, represented an early version of an AR headset.

The current excitement around AR is being driven by advances in technology, experts say. Smartphones now are packed with sensors that can quickly determine their orientation and location. They include powerful processors — and speedy data connections that can allow them to tap into even more powerful computers on the internet — that can help them make sense of the scenes around them. And advances in image recognition and artificial intelligence are allowing devices to quickly identify what their cameras are looking at.

“The core components of these augmented reality systems are, of course, the computing,” said Gordon Wetzstein, an assistant professor of electrical engineering at Stanford who focuses on augmented and virtual reality. “We’ve made a huge amount of progress in the last 10 years.”

Many companies and industry experts are starting to see augmented reality as the next evolution of computing. In the future you may read your email, watch videos or play games not on your smartphone, television or laptop, but via special kinds of glasses that have built-in, transparent displays.

We’re not there yet. Google Glass was a failure. Magic Leap’s glasses are still in development. And HoloLens is bulky, hard to use and expensive, with prices for the prototypes starting at $3,000.

But for now, smartphones make good substitutes for many augmented reality applications. Indeed, Facebook is focusing its efforts around building AR features into its smartphone apps.

In the meantime, developers are just starting to figure out how and why we’ll use augmented reality.

Entertainment is a given, especially with the huge success of Pokémon Go, a game that encouraged players to collect virtual animals they found using the app as they roamed about the real world. Facebook, Snapchat and Apple are betting consumers will love sharing photos and videos they’ve enhanced with virtual stickers and the like.

But Facebook also sees a role for AR in marketing. At its developer conference, company officials demonstrated how the Facebook AR technology could identify a restaurant a person was standing in using object recognition and automatically display a snippet from a Yelp review or a link to the restaurant’s website.

Industry experts also think AR will play a big role in communication and in education. AR could offer a new form of telepresence; wearing an AR headset, a person could potentially see an image of a friend or co-worker that appeared to be sitting in the chair next to them as they carried on a conversation. And instead of having to go to Wikipedia to find out about a piece of art or a sculpture, an AR app or headset might simply provide you with that information when you just looked at it.

There are still things to work out on the way to this kind of future. In addition to perfecting the headset technology, society is going to have to wrestle with privacy concerns. Augmented reality has the potential to become a new, intrusive and pervasive kind of surveillance technology by identifying individual people — and their whereabouts — in real time, without their permission.

But it’s time to start thinking about that future, because if the buzz is any indication, it’ll be here soon.