In Berkeley, a shift from free speech to fight club 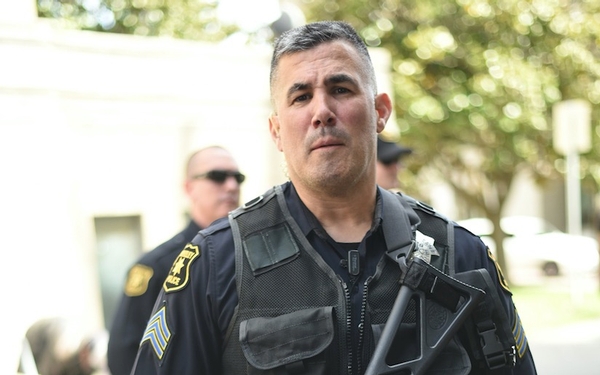 A Berkeley police officer looks on as alt-right activists and Trump supporters equipped in helmets, football pads and other gear rally in the Berkeley's Civic Center Park.

As helmeted demonstrators descended on this college town last weekend for more rallies, a decidedly quieter form of activism was struggling to be heard.

One Berkeley resident held up a sign reading: “No hitting. Love Mom.”

Other residents hired a plane to pull a banner: “Fly above the hate!”

Over the last few months, staunchly liberal Berkeley and the University of California campus have become a national stage for tensions over the Trump presidency.

Thousands of protesters turned out in February to prevent conservative provocateur Milo Yiannopoulos from speaking. Street brawls that erupted during rallies in March and April by far-right and white nationalist groups forced the cancellation of an appearance by conservative author Ann Coulter. In its place another large rally was called, made possible by the heavy presence of police.

Many residents are unhappy with what’s happening. And now, this movement is finding its voice.

“We don’t need you to come to our community to be violent,” said Dan Robinson, 55, a 20-year Berkeley resident and full-time student who with like-minded residents banded together to form a group called Respect Berkeley.

By the April 27 demonstrations, it had more than 100 members and reflected a larger sentiment expressed by local elected officials as well as merchants who grappled with shutdowns and vandalism during the unrest.

“What we think is going on here is we’re being used politically by much larger forces to become a punching bag,” Robinson said.

Berkeley Mayor Jesse Arreguin was more blunt, saying the city is being used by extremists on both the right and left “to literally fight and challenge each other.” He said the situation poses unique challenges because the agitators are looking for publicity and have no interest in easing tensions.

“We have to find a way to stop this,” he said. “My nightmare is that someone is going to die.”

In the end, there was no mass violence by demonstrators who converged on Berkeley to support or oppose Coulter.

Some credited the relative peace to the heavy presence of police. More than 50 helmeted city officers formed a human wall between chanting sides with dozens more waiting in vans around the corner, instead of relying on the plastic netting they tried to use to separate angry demonstrators two weeks earlier.

Arreguin said Berkeley has become a surrogate for the Trump resistance and a magnet for extremist Trump supporters. He blames the deterioration in part on the unrest that forced the cancellation of Yiannopoulos’ speech. He believes there was insufficient planning by police, giving violent protesters the upper hand.

“And that engendered this intense animosity against Berkeley,” he said, adding those protesters were trying to “turn our city into Fight Club.”

Even though the Coulter controversy didn’t incite more violence, some in Berkeley believe something has fundamentally changed about protest culture. UC Berkeley spokesman Dan Mogulof noted that the university has hosted many controversial speakers, all without incident until the last few months.

The rise of Donald Trump and the 2016 presidential election has heightened divisions in the country. And at Berkeley and elsewhere, it’s drawn extremists on both sides willing to make trouble.

“Something shifted, and it touches on broader societal trends. We can’t ignore it. This is a subject of conversation throughout the higher education sector,” Mogulof said.

Others believe the community is simply being used by others trying to score points.

Pranav Jandhyala, president of the centrist student organization that agreed to co-host Coulter for a speech on immigration, said neither the university nor Coulter and her national sponsors had much interest in real dialogue.

It’s frustrating “as a student to see this ‘free speech’ thing become spectacle,” said Jandhyala, president of BridgeUSA, a student group formed after the November election to help foster dialogue about Trump.

Berkeley residents by and large are no fans of Trump. The town and its university take pride in a reputation as the birthplace of the free speech movement of the 1960s. So calling out left-wing protesters is a sensitive undertaking.

It speaks to a division in the leftist protest movement that emerged during the Occupy movement a few years ago. Many of those demonstrators are peaceful, but a small yet loud bloc believes violence is the only way to bring change.

“Sharp struggle is often how people learn the most in a quick period of time,” said Berkeley resident Raphael Kadaris, 35, an organizer for RefuseFascism.org as he held a placard at last week’s demonstrations.

But there were also some signs that the extremists were trying to tone down the clashes.

After brawls at demonstrations two weeks ago sent seven people to the hospital and resulted in 20 arrests, anarchist and pro-immigration activists were present in the April 27 crowds but did not don masks and attack with explosives and pepper spray. When battle-ready members of the alt-right rushed forward to confront those on the other side, a leader of the far-right Oath Keepers ordered retreat.

“Let the police do their job!” she commanded.

“We don’t support anybody going out there and trying to get revenge or retribution on somebody else,” Rhodes said. “Once someone has broken off the attack, you’re not supposed to keep going after them.”

Yiannopoulos has vowed to return later this year for what he describes as Milo’s Free Speech Week in Berkeley.