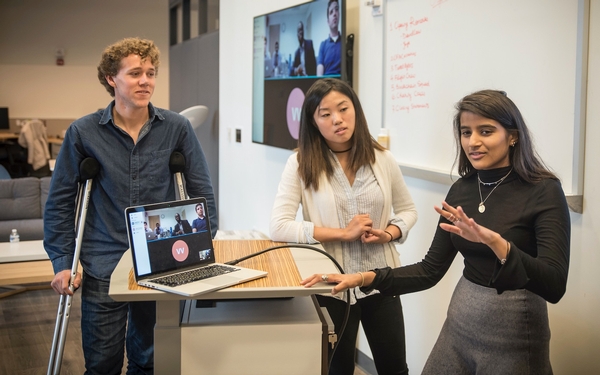 Berkeley students Tyler Heintz, Alice Ma, and Anjali Banerjee give a presentation on 4/17 at a class they formed with the goal of attempting to find tech solutions to combat international terrorism.

After a man drove a cargo truck through a crowd on a promenade in the French city of Nice in July, University of California, Berkeley students Tyler Heintz and Anjali Banerjee frantically searched for a friend.

Banerjee ran through crowds that had just been celebrating Bastille Day, and in the days that followed she went from hospital to hospital looking for fellow Berkeley student Nicolas Leslie. Heintz was detained by police as he tried to hang signs showing a photo of Leslie and asking people to call if they had information.

They would soon learn that Leslie, 20, was one of 86 people killed in the July 14 terrorist attack.

The pain from the two tragedies inspired Heintz, 20, Banerjee, 19, and fellow student Alice Ma, 21, to do something.

Their solution: create a class to try to find technological means for dealing with international terrorism. They hoped to come up with ideas that could help researchers and law enforcement officials. The students would build databases and algorithms to tackle the issue.

“We have a bunch of talented people here in Berkeley, and we had experienced one of the world’s most dire problems,” Heintz said. “We were frustrated that we couldn’t apply these skills to what’s happening in the world. Nick’s death was part of the motivation, but it was more about the atrocity and problem as a whole.”

The academic endeavor materialized in the format of an Innovation Collider course, a special project run through the campus’s Pantas and Ting Sutardja Center for Entrepreneurship & Technology. With the help of experts working in the field, the students sought ways to track the illicit flow of bitcoin, make it easier to track flight data and try to unravel complicated webs of related charities that could have links to terrorism.

In the past, these classes tended to focus not on terrorism but on subjects closer to the heart of Silicon Valley — like designing cities for autonomous vehicles.

Ma, who had not been in Nice during the attack, had some experience that could be helpful. Last summer, she interned at the Center on Sanctions and Illicit Finance working for former CIA analyst Yaya Fanusie.

In September, Fanusie met with the three students he called the “dynamic trio” and began offering them guidance on how a class might be helpful for people studying terrorism. The Berkeley alum also found them a sponsor — the nonprofit Center for Advanced Defense Studies, which, according to its website, “is dedicated to providing data-driven analysis and evidence-based reporting on global conflict and transnational security issues.”

The class, which the three spent the fall striving to make happen, began in January and lasted eight weeks. The first task for the student teams was to identify a clear practical problem that could be solved.

“They had all the technological knowledge. I sort of helped them understand things in the field,” said Fanusie, who advised the class.

Fanusie got the students acquainted with the Office of Foreign Assets Control in the Treasury Department, and its directory of all the individuals who are sanctioned by the agency. The database could be frustrating to navigate even for experienced terrorism analysts. An easier way to thumb through these sanctioned people and integrate the information with other databases would be a huge help for researchers, Fanusie explained.

“There’s actually a lot of people who would want to work on stuff like this if they were given the opportunity,” Ma said.

The 22 students in the class — most of them majoring in engineering — were split into groups of four and five. They met Mondays for two hours to brainstorm and listen to experts.

“The speakers gave us a lot of knowledge about the industry and certain problems that need to be addressed,” said Banerjee, a history major.

On a recent Monday in April, the class met for final presentations in the Sutardja Center’s Silicon Valley-inspired office, which is built into the side of California Memorial Stadium, where the football team plays. They had been working overtime to fine-tune their presentations.

Heintz, who had broken his leg playing soccer, hopped from one side of the room to the other in order to make sure his group was ready.

Fanusie and several of his think tank colleagues participated via Skype. Each group received some critiques about how they pitched their proposals to a panel of judges in the room.

Less than a year after tragedy shook their community, the students felt that they had found a way to do their part.

In May, they will go to Washington and present their findings to Treasury Department officials and representatives of the defense industry and think-tank community.