A trip to Iceland to chase the Northern Lights 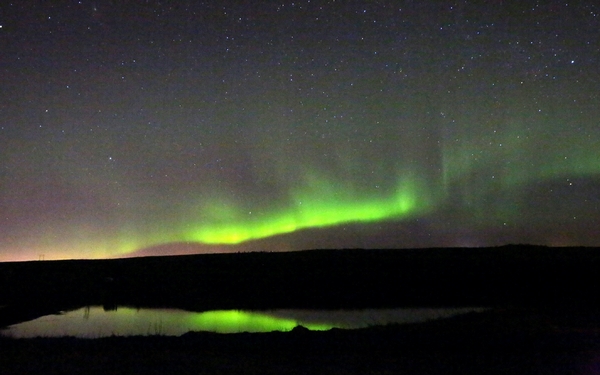 The allure of the Northern Lights led me to Iceland.

Little did I know how elusive they are.

Checking the weather one last time before departure on my WOW air flight, things weren’t looking promising. Precipitation appeared in the forecast for the entire week, and clear skies are required to see the aurora borealis.

When my three travel buddies and I landed at Keflavik International Airport, we were greeted by rain, not snow. Turns out the country isn’t as icy as it sounds — at least not all the time, even in mid-February.

It was 4 a.m., another 5 1/2 hours to go before sunrise, so we got the rental car and drove around trying to see Keflavik. The town was asleep.

Arriving in Reykjavik, Iceland’s capital and its largest city, we were enticed by an illuminated glass dome structure on a hill and drove up a side road to see it. It was the Perlan, a hot water tower perched over the city. In town, we were lucky to be accommodated at our guesthouse hours before check-in and took a much-needed nap before sunrise.

Outside, the air was fresh and chilly. We drove back west to the Blue Lagoon, which we had tickets for, but on our last night. A geothermal spa, the large lagoon was a bright turquoise color during the day, its warm water creating steam that rose into the frigid, 30-degree air.

Further southwest, we reached the noisy Gunnuhver steam vents, spewing heat from the ground nonstop, they’re named after a female ghost who supposedly haunts the place. Close by, the Hafnaberg Cliffs showed off Iceland’s rugged coastline. Waves crashed against protruding rocks as relentless wind pounded us, forcing us to retreat to the car.

Iceland was cold, but could’ve been worse. Snow boots — waterproof — with thick socks, a thermal long sleeve shirt, leggings under pants, a light down jacket and a waterproof North Face jacket got me through just fine. I only wore snow pants on a couple of occasions.

Iceland is known for fresh fish and lamb, so we stopped at Fish House Bar & Grill in Grindavik. Fish and chips of haddock melted in your mouth and the grilled lamb chops tasted particularly rich. The sun set just after 5:45 p.m., and we rested for the next day’s excursion.

Before dawn, we loaded our backpacks into the car and drove to meet our Discover tour guide Orri Amin, who would take us in a 4 X 4 super Jeep for the next couple of days to explore south Iceland.

Once we hit the road east, visibility dropped. As Orri drove through the fog and rain with ease, we were grateful we chose not to drive ourselves. Soon, we began off-roading. The Jeep cleared rocks, small hills and went down and over shallow rivers to reach the Gigjokull glacier outlet.

Orri pointed out the massive block of ice nestled in between the mountains and explained that Eyjafjallajokull, a volcano covered in an ice cap, erupted in 2010 and caused Gigjokull to burst and melt. He said we could walk as close to it as we wanted, but warned we would have to cross water. He stayed behind.

At a narrower part of the stream, someone had placed a plank of wood, so I crossed — and almost slipped in the process. The glacier was farther than it looked, and a bit daunting knowing I was standing where a chunk of it had broken off and melted: I turned back.

“Next year, it will be gone,” Orri said as we drove away from the UNESCO World Heritage Site. “The glacier is melting very fast.”

Our next stop was the Seljalandsfoss waterfall. I walked up to where it was roped off but no farther. Orri said we could walk behind it but would get soaked.

Next we ventured to Skogafoss, another towering waterfall that was even more extraordinary when you realized you could walk right up to it without any barrier or obstruction. I stopped when a wall of water hit my face, but feeling its thunderous pulse for a moment was stunning. We continued walking up what felt like hundreds of narrow steps to see Skogafoss from above.

Tired and hungry, we welcomed Orri’s suggestion that we eat at the best place for fish and chips. It was a food stand, Sveitagrill Miu Mia’s Country Grill, which serves only the catch of the day. The fillet of deep-fried fish paired perfectly with potato wedges served with salt and vinegar and Icelandic tartar sauce, slightly sweeter than American style with crunchy relish and a hint of curry.

The last stop of the day was Black Sand Beach. Beneath a gray, overcast sky, the beach was even darker than I imagined. The sand was the color of charcoal, a sharp contrast to the crashing white waves. Orri warned us not to stand too close. Up close, you can’t see the waves coming, he said, and families have been swept away never to be seen again.

I found I could have stared at the beach’s wicked beauty for hours, if it wasn’t for the cold, beating wind. A couple of large rocks protruded from the sea. On the sand, cliffs of basalt columns resembled a step pyramid and offered a photo-op for visitors willing to climb.

We stayed overnight at the Gerdi Guesthouse surrounded by nothing but mountains and the ocean. I eagerly asked Orri if we could see the Northern Lights and he pointed to the sky. The aurora activity was high, he said, but we had no hope of seeing it through the clouds. He showed us pictures of the auroras and said they look better in photos, but are still very beautiful.

The next day, we went looking for ice caves in Skaftafell, a wilderness area in Vatnajokull National Park. Our guide, Lu Gudmundsdottir, helped us hook spikes on the bottoms of our snow boots so we could walk on the glacier, and she led us to several ice caves. The first was flooded and we were not able to enter. The second was more inviting.

“We’re very lucky because (the water) was gone through the night,” Lu said of the cave, called Black Diamond. “Everything we were standing on was flooded.”

Usual Februaries in Iceland are much colder.

As we approached the large opening, I was awed by crystallized, frozen walls illuminated by daylight. Deeper in, the light disappeared and we used the headlights on our helmets to navigate our way in. The cave’s ceiling dropped gradually until we had to duck down and nearly crawl. It was humbling to sit there and take in the natural formations that are melting and breaking at an increasing rate with climate change.

The rest of the day trip was less physical, but no less marvelous.

Jokularson, a glacial lagoon, was full of large, soft blue, floating icebergs shifting slowly. It was hard to imagine the lagoon was iceless a few days ago, but had changed due to wind and the current, according to Orri.

Just when I thought we had seen the highlights, Orri took us to the other side of Jokularson to Diamond Beach. Icebergs washed ashore, or left on the black pebbled ground by the receding water level, dotted the entire area. I climbed on various chunks of ice, most of them bigger than me. I felt tiny walking through what seemed like a maze of diamonds.

On the way back to Reykjavik, Orri drove us up a trail he said his wife doesn’t like him to cross, so we could see the damage that the recent Katla volcano eruption caused. Looking down from the top of the mountain, we could see miles and miles of black matter that from a distance looked like an ocean, but was actually dried lava. Then the volcano disappeared behind the fog.

“Now you know why I love my country. It’s incredible,” Orri said. “We had it for two minutes and it’s gone.”

It was almost dark when we reached Seljalandsfoss, but Orri kept his promise about climbing behind it. Cold and weary, I felt like passing, but some visitors leaving said we should do it. The incline wasn’t too steep but scary, as there was no railing, but worth braving and getting drenched. The backside of the waterfall was majestic to see at nightfall, when no one else was around.

The Golden Circle, one of the most visited tourist attractions in Iceland, paled in comparison to the private super Jeep excursion. Perhaps we should have done it first.

We drove the route ourselves instead of joining a large tour bus. The Strokkur fountain geyser was impressive, shooting water high in the air, and suddenly, every few minutes. The Gullfloss waterfall was unlike Skogafoss and Seljalandsfoss — two-tiered and only able to be admired from a distance.

We spent the rest of the day into the evening at Laugarvatn Fontana, a lesser-known spa with geothermal baths, steam saunas and access to a frigid lake I only dipped my toe into. It would’ve been nice to see the Northern Lights from there, but again it was overcast.

On our last day, we walked around Reykjavik, admiring the quaint buildings against nature’s rugged backdrop and finding our way to the tall, Lutheran parish church Hallgrimskirkja visible through the narrow streets.

With a little time left to spare, we drove through an underwater tunnel and to the small fishing town of Akranes. It was more deserted than other parts of Iceland, and had a small lighthouse. Stones painted with flags of the countries people had visited littered the ground.

At night, we returned to the Blue Lagoon. It was freezing, so instead of walking, I swam out from a different exit. I spread silica mud on my face and deemed a blueberry Skyr yogurt smoothie as my drink, rinsed it with the warm lagoon water and put on an algae mask. It was a relaxing way to end the trip full of extreme sightseeing.

Leaving the Blue Lagoon at night, we saw a pastel smear across the dark sky and I thought maybe those were the Northern Lights. Earlier, I had checked the forecast and was excited to see the western part of the country would clear up.

We drove to an area where some cars had parked on the side of the road.

One of us had a pro camera, set it up on a tripod and snapped a shot and, sure enough, captured the eerie green light. Soon, the aurora activity intensified and revealed its colors to the naked eye.

With my iPhone incapable of capturing even a faint dash of the phenomenon, I learned to simply enjoy the moment. Many times in life, things aren’t what they seem, and sometimes, well, there they are.

Travel
Want a camping reservation in California? Try this
98 views