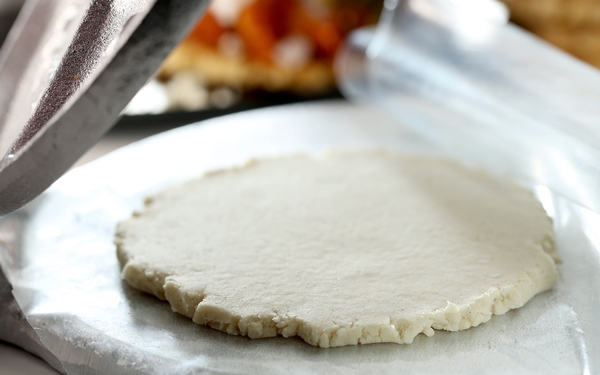 Gorditas are masa dough disks, a good deal thicker than a tortilla. You can flatten them in a tortilla press, leaving them about 1/4- to 1/8-inch thick. Food styling by Mark Graham.

Walk into a Taco Bell to order a gordita, and what you get will bear little resemblance to the traditional Mexican dish of the same name. At Taco Bell, a gordita is more akin to a pliable pita flatbread, stuffed with the fast food chain’s usual suspects of ingredients — watery tomatoes, shredded lettuce, a sprinkling of cheese, a dollop of sour cream and whatever meat the fast food giant is promoting that day.

Head south of the border, though, and you’ll encounter something completely different. Resembling a corn cake and similar to the arepa, its Venezuelan cousin, a gordita is a classic street and lunch food throughout central and northern Mexico, easily enjoyed thanks to its portable size. The gordita — which translates to “chubby one” or “little fat one” — is a pastry made with masa, the same traditional cornmeal dough used to make tortillas, and stuffed with cheese, meat or other filling.

It doesn’t take much for a tortilla to become a gordita — just pack the masa a little thicker, and you have the basic technique. We’re talking a mix of simple masa harina (a widely available corn flour), water, salt and, if desired, lard. (Why not? Live a little.)

Typically shaped narrower in diameter than a traditional tortilla, it’s not folded over like a taco. Instead the gordita features a slit on one side that cools down the dough disk after cooking while simultaneously creating a pocket for stuffing.

The sky’s the limit on stuffings, with gorditas often sharing the same fillings as tacos — barbacoa, al pastor, carnitas, you name it. What the thicker gordita excels in is encasing typically thicker, saucier stews and preparations than you’d find in a taco, like chicharron con chile, a spicy pork rind stew. The little pocket and thicker disk of masa can withstand and absorb a filling’s juices and liquids, the effect being at once a crisp outer shell and toothsome, savory interior.

One can deep-fry a gordita, creating a crispier outer crust, or it can be pan-fried or heated on an iron skillet, which offers a nice, smoky sear to the whole shebang. Taco Bell may have introduced the word gordita to many people, but there’s nothing like the real thing to get a greater taste of Mexican cuisine beyond tacos and burritos.

From Gonzalo Guzman’s new cookbook, “Nopalito” (Ten Speed Press, $30), written with Stacy Adimando, which is named after his two San Francisco restaurants. The chef suggests making masa dough from scratch with dried corn, but for most home cooks, using store-bought masa harina is an easier route. Guzman suggests serving the gorditas with a tangy salsa, such as salsa de arbol, “to cut through the meaty sausage and starchy potatoes.”

1. Bring a small pot of water to boil. Add the salt and potatoes, and cook until al dente, 6 to 8 minutes. Drain and set aside.

2. In a medium bowl, mix the masa with the lard until well combined. Form the masa into 8 equal balls, a little less than 1/4 cup each. In a tortilla press lined on both sides with a round of plastic, flatten each masa ball into a round slightly thicker than a tortilla (between 1/8- and 1/4-inch thick, and 4 inches wide).

3. In a large skillet or griddle over medium heat, drizzle in about 1 teaspoon oil for each tortilla, and add as many tortillas as you can without overlapping them. Cook, turning once, until puffed up and filled with air, 3 to 4 minutes per side. Remove and let cool slightly. Using a paring knife or butter knife, pierce the edge of each gordita horizontally, then carefully wiggle the knife between the layers, separating them and creating an opening in the top third of the gordita (it should look like a coin purse).

4. When ready to serve, in a large skillet or griddle over medium-high heat, drizzle in 1 to 2 teaspoons oil, and add a gordita; cook, turning once or twice, until lightly crisp on both sides, about 4 minutes total. Repeat with the remaining gorditas, adding more oil to the pan as needed.

5. In a separate medium skillet, cook the chorizo, stirring occasionally, until cooked through and hot, about 6 minutes. Stir in the potatoes, and cook until hot and tender. Divide the mixture among the gorditas, stuffing 1/4 cup into each pocket. Garnish with salsa, queso fresco, cabbage, cilantro and onion.

Put masa harina in a mixing bowl, add the water all at once (this will keep lumps from forming) and mix together quickly, just until the ingredients are combined. Set the dough aside for 5 minutes. Proceed with making the gordita.

Season masa harina with a little salt to help bring out the flavor in the corn. Start with less than the recommended amount of water, as too-wet masa can be very soft and difficult to work with, and it won’t have as fluffy and springy a consistency. Reserve a few tablespoons of liquid when initially combining the ingredients, and add them only if needed. Let the masa rest for at least 10 minutes (as much as an hour) to absorb the water before adding more. The finished product should be the consistency off moist, smooth mashed potatoes or a soft fluffy sugar cookie dough. If masa is dry or crumbly while working with it, mix in a bit more water.