See ya, kale. Cauliflower is the new ‘it’ veggie 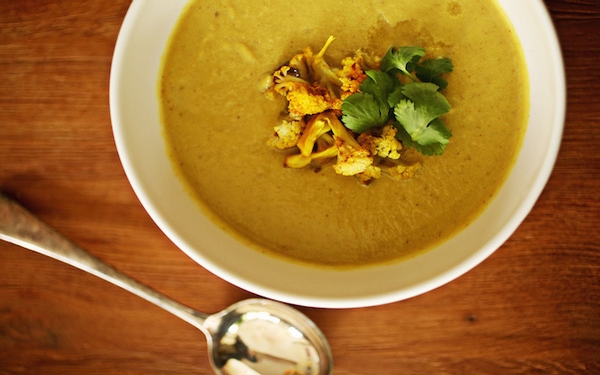 Turmeric, cumin and coconut milk are added for an Indian flair in this Cauliflower Soup with Coconut and Turmeric. (Juli Leonard/Raleigh News & Observer/TNS)

There’s no real rhyme or reason for one ingredient to be popular while another is considered passe.

But one thing is certain. Cauliflower has gained its place in the spotlight.

I first noticed cauliflower on restaurant menus about a year ago and predicted it would be the next kale. Often, restaurant chefs spark trends by experimenting with an ingredient and then adding it to their menus. Its versatility and plain flavor have catapulted cauliflower into the limelight. It’s perfect for any number of cooking methods and is often used as a low-carbohydrate substitute.

Magazines and cooking shows are now highlighting cauliflower in a variety of recipes from cauliflower “steaks” to pizza crust.

We are most familiar with the white version, but now the choices are multi-colored. Orange, green and purple cauliflower are showing up in farmers markets and some grocery stores. They’re not only packed with vitamins such as A, C, B and K, but the purple version also contains antioxidants.

I have always loved cauliflower, thanks to its ability to morph into whatever you have a taste for. Cauliflower has been a part of my menus as far back as I can remember: simply steamed with a drizzle of olive oil, pureed into a soup as a low-calorie thickener or roasted in a hot oven to a crisp golden brown.

Whether it’s roasted, pureed or stir-fried, in soups, sauces or on its own, cauliflower is the “it” food of the moment.

Good-bye, kale. You’ll now be eating cauliflower in place of mashed potatoes or rice and in place of popped corn.

Here are some of my favorite ways to prepare cauliflower and incorporate it into your cooking.

One of the many ways to enjoy this inexpensive (about $2 a pound) and readily available vegetable is to roast it. The higher heat helps caramelize cauliflower and brings out its sweetness.

It stays firm when roasted, unlike other vegetables, and tends to absorb the olive oil and seasonings, which gives this neutral-flavored vegetable a deliciously nutty flavor.

It can be served at room temperature and is also good leftover, tossed into a salad or as part of a plate of appetizers. Roasted cauliflower is perfect alongside almost any entree, especially roast chicken or lamb. I particularly like it as part of a vegetarian meal.

Cauliflower rice is showing up on menus everywhere. As a gluten-free rice substitute, a cup of cauliflower has 5.3 carbs compared with 53.2 for white rice and 44.8 for brown rice.

You can add herbs, such as parsley, chives, basil or cilantro, and spices, such as curry, cumin or red pepper flakes. Citrus, cheese, garlic and mustard are all wonderful additions. It’s also the perfect base for your favorite stir-fry.

You can find it already in its “rice” form in the produce section of many supermarkets. It’s also easy to make at home.

Cauliflower rice can be made in the food processor in a few minutes. Remove the core, coarsely chop it and transfer to the processor and pulse until the cauliflower looks like rice or couscous. Then proceed with your recipe and enjoy a low-carb and grain-free side dish.

Cauliflower lends itself well to a pureed soup with its creamy texture. Roasting it first adds a rich meaty flavor. In this cauliflower soup, turmeric, cumin and coconut milk are added for an Indian flair.

The cauliflower is steamed first in a skillet and then pan-seared for flavor. You can also roast the cauliflower instead and include olives, crumbled feta cheese or toasted pine nuts for variation. Recipe by Amanda Cushman.

Heat a large skillet over medium-high heat and add 1 cup of water. Add the cauliflower and cover. Steam for 3 minutes and then uncover the pan. Turn the heat to medium high and let the pan dry out.

Add 2 tablespoons of the olive oil and the garlic and shake the pan once or twice. Pan-sear until cauliflower is tender, or about 3 to 4 minutes.

Cauliflower makes a perfect substitute for rice and is easy to make. You can also buy it in most supermarkets in the produce section. Recipe by Amanda Cushman.

Juice of one lemon

Transfer the cauliflower in batches to a food processor and pulse until it’s the texture of rice. Set aside in a medium bowl.

Heat a large skillet over medium-high heat and add the oil. Add the shallot and garlic and saute for about 2 minutes.

Add the lemon, salt, pepper and parsley and stir, taste for seasoning and serve.

CAULIFLOWER SOUP WITH COCONUT AND TURMERIC

Turmeric, cumin and coconut milk are added for an Indian flair. You can substitute flat leaf parsley for cilantro if desired. Recipe by Amanda Cushman.

3 garlic cloves, peeled and cut in half

In a small bowl, combine the garlic, turmeric, 3 tablespoons of the olive oil, cumin, salt and red pepper flakes. Sprinkle evenly over the cauliflower, toss well. Transfer to a rimmed baking sheet and roast until tender, about 35 to 40 minutes.

Remove from the oven and reserve about 1/2 cup of the roasted cauliflower. Set aside for garnish.

Meanwhile, heat a medium saucepan over medium heat and add the remaining oil. Add the onion and ginger and cook until translucent, about 2 to 3 minutes. Add the broth and transfer the roasted cauliflower to the pan. Bring to a boil and cook covered on medium heat about 25 minutes.

Remove the pan from the heat. Using a hand-held blender or food processor, blend until smooth. Salt to taste and stir in the coconut milk.

Serve garnished with the reserved roasted cauliflower and cilantro. Drizzle the additional coconut milk on top of each serving, if desired.