‘Voice From the Stone’ called out to Emilia Clarke 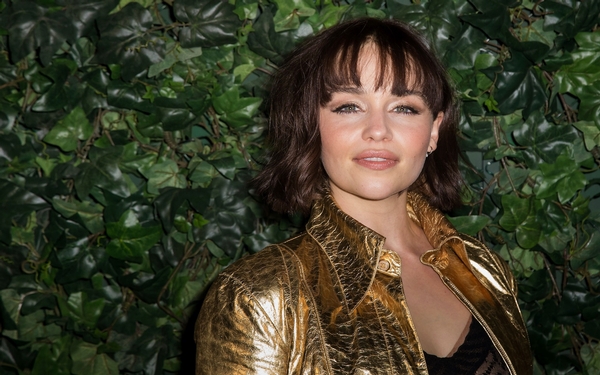 In “Voice From the Stone,” Emilia Clarke had a dream come true.

The star of the HBO fantasy adventure series “Game of Thrones” had been excited about the project ever since she read the script.

“It was about five years ago, maybe even longer,” she said in a phone conversation. “It just clung to me. I just was so drawn in by everything, and the way it was written was so arresting and beautiful and sparse. Magic was just woven into the script. It kind of simmered and bubbled on the page.

“And years later, we finally made it work out.”

The feature film directorial debut for Eric D. Howell, the movie is a period love story with the feel of a psychological thriller.

Set in 1950s Tuscany, it’s based on an Italian novel, “La Voce Della Pietra” by Silvio Raffo. Clarke plays Verena, a nurse hired by a handsome, brooding artist to take residence in a vast stone manor resembling a Gothic haunted castle. The owner’s young son has not spoken a word since his mother’s death a year earlier. Was his hush triggered by grief, or is a spirit inside the manor’s thick masonry walls silencing him?

Despite the years spent developing the production, “it kept coming back to me,” Clarke said. “I kept thinking about Verena and doing a kind of updated Hitchcock ‘Rebecca’ in, like, Rome. Of course I’m going to try to make that happen. Who would say no to that? Eric was so passionate and the producer Dean Zanuck was so behind it that they kept working on it for years. When it all came together, it was like, ‘Finally we’re doing it!’”

It’s not that Clarke, one of the highest-paid actors in television, lacked other options. There’s an independent-minded variety in the types of parts she chooses, shuttling between originating iconic roles and revitalizing enduring classics.

“Game of Thrones” was her first job after drama school, and despite much of the cast being massacred in bulk, she has remained the saga’s cornerstone since it began in 2011. Clarke’s Daenerys Targaryen began as a shy platinum-blonde damsel but quickly journeyed into a frequently unclothed power player, fireproof mother of dragons, and consumer of raw, bloody stallion hearts. She is about to begin her seventh season battling evil and enchanting a fan base as potent as an army of flame-breathing lizards.

In the meantime, Clarke stepped into Audrey Hepburn’s heels as Holly Golightly in the 2013 Broadway revival of “Breakfast at Tiffany’s,” where she was hailed by the New York Times as “positively edible.” In 2015’s “Terminator Genisys,” Clarke’s turn as Sarah Connor, the tough as nails role created by Linda Hamilton, was considered one of the film’s high points. Although the film failed to reboot the science fiction franchise, Rolling Stone called Clarke “a dynamo.”

She’s slated to be the female lead in the upcoming “Star Wars” Han Solo prequel in 2018.

While studying acting in London, “I got a voracious appetite for characters,” she said, a mind-set that has drawn her to vocally guest star in gonzo cartoon comedy series. “Animals” recruited her to play a turned-on rat playing Twister, and on “Futurama” she became a flower shop owner who falls in love with the giant crustacean Dr. Zoidberg because she cannot smell the stench.

“(Doing) different things is part of continually trying to improve as an actor. There’s two sides of the acting coin. You can really take it very, very, very seriously, which can suck the joy out of it sometimes. So it’s good to keep it light and imaginative, and the audience’s appetite for this kind of movie is huge. It’s designed for escapism.”

A diverse range of roles is essential to her aims as a performer.

“The only way to improve is to keep stretching the boundaries and seeing what works. I want to be able to look back when I’m older,” said Clarke, 31, “and look back at a body of work I’m really proud of. Rather than ‘Oh, yeah, I did that character 17 times.’ I get itchy feet quite quick and head off for the next.”

One reason she has stuck with “Game of Thrones” is that her character keeps morphing. “Every season she’s different. I never come back to the same girl. The goalposts are moved every time. I’m very lucky with that. It’s evolving and changing and ever richer.”

She said it was “incredible” to work on the first-time feature by Howell, whose entry to the industry as a stuntman propelled him into filmmaking. His credits include the short films “Ana’s Playground,” which was shortlisted for an Academy Award nomination, and “Strangers,” starring James Denton and Marta Milans.

“He’s got a really beautiful eye and his vision for the piece is one other thing that drew me in to be a part of it.” He came to the complexity and challenge of “Voice” “with so much energy that it was unreal. He hasn’t been worn down. He would do things with changes every day and every moment and to have so much excitement is really effective. So you say, ‘Yeah, let’s try that, let’s do that.’ “

Even if that involves shooting in a macabre 1,200-year-old Tuscan castle that almost emerges as a character of its own. Clarke said the experience was “genuinely creepy. Truly frightening. But it’s magical. It’s beautiful. And it’s like I don’t have to do any acting, I can just react to this place. What the camera is seeing is so much of the story.”