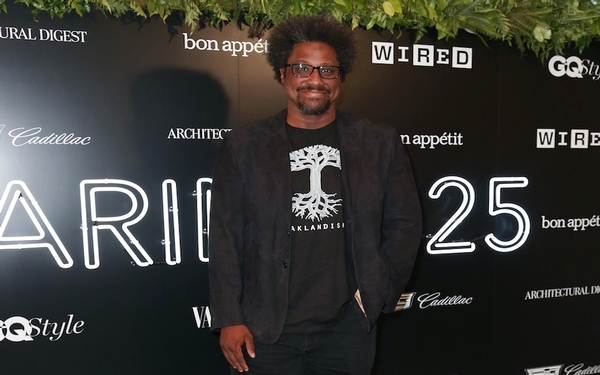 The flash of faces across the CNN promo spot is instantly recognizable, a swirl of anchors and reporters ubiquitous in these news-obsessed times.

The last one, however, is not the like the others. It belongs to W. Kamau Bell, a stand-up comic whose previous cable foray was a short-lived late-night show on FX.

“No comedian grows up thinking, ‘I hope one day to have a show on CNN,’” Bell said with affable wryness. “Blitzer, Lemon, Amanpour, Bell. It seems wholly ridiculous, and yet wholly like my career.”

The series, “The United Shades of America,” appears absurd only at first glance. What felt to some like a novelty when it launched last year — a lefty comic exploring controversial topics — soon became as serious as the Electoral College. In the first episode, Bell met with KKK members. In the second, he visited inmates at San Quentin State Prison.

The eight-episode sophomore season kicked off Sunday, and “United Shades” continued its theme of what might be called lighthearted heaviness. Bell headed to the violence-wracked South Side of Chicago and a Maryland town considered one the most diverse in the nation, embarks on a quest to buy a gun (as much moral journey as travelogue) and interviews Richard Spencer at an alt-right conference.

There is much kibitzing with subjects — Bell doesn’t do much more than chuckle amiably as Spencer fires jaw-droppers about white superiority — and humorous voice-over asides.

This season “United Shades” beefs up the observational stand-up that wraps around the segments. (On the difference between immigrants and refugees: “When you move out of your apartment at noon … and when you move out at 2 in the morning.”) But the topics are not laughing matters.

This might seem the wrong time for a Kumbaya show in which a black liberal from the Bay Area seeks dialogue with Trump voters in coal country.

Or, Bell argues, it could be the best moment for it.

“As the left we have to get outside of ourselves,” he said. “It sounds so simple and so corny, but what we need is a real conversation. People in Hollywood can condescend to the way a lot of other people are living. I like living in Berkeley but I know Berkeley’s not the world.”

As he had lunch at a restaurant near CNN headquarters last week, Bell flashed the mix of warmth and snark that makes him, in the network’s eyes, the right person to deliver this message.

He sees economic anxiety as a key driver of racism and believes most people — even KKK members — would be more open-minded if their lives were just going better.

“People may not like this, but I felt empathy for the Klan when we shot that episode,” he said. “It’s, ‘Oh, we’re underemployed, and why is that?’ They bought the myth of white supremacy and now they’re not supreme.”

Bell says the box into which we put many Americans is too small to contain them. Taping a segment in Dearborn, Mich., he met an imam from Yemen who was voting for Trump. He was startled until the imam explained his rationale: the man believed Trump would be the most aggressive toward ISIS.

Bell, 44, has become a showbiz success through DIY means — one-man shows, multiple podcasts, a book. (“The Awkward Thoughts of W. Kamau Bell: Tales of a 6’ 4”, African American, Heterosexual, Cisgender, Left-Leaning, Asthmatic, Black and Proud Blerd, Mama’s Boy, Dad, and Stand-Up Comedian”) Acting roles are not a priority. “If I’m thinking like a lot of comedians — ‘How do I get that part in the next “Transformers”?’ — I’m doomed.”