Chris Cornell, who helped reignite hard rock in the 1990s with Soundgarden, dies at 52 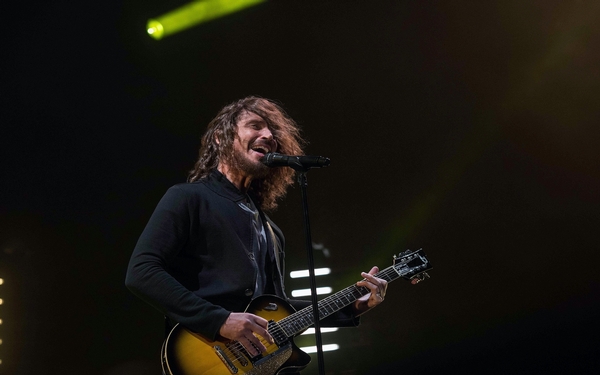 Chris Cornell, an icon of the ‘90s hard rock grunge movement and the anchor of Soundgarden and Audioslave, was never quiet about his need to perform.

The artist’s death at age 52 was reported early Thursday after a Wednesday night Soundgarden concert in Detroit.

The Wayne County medical examiner’s office has ruled Cornell’s death a suicide by hanging, according to the Associated Press.

Cornell had said he would have led a much quieter life if not for the stage.

“If I didn’t do what I do, I think for the most part I would have very few friends and be a shut-in most of the time,” he told The Times in 1991. “It’s sort of a battle between that person and then the guy that wants to just let it all out in front of 2,000 people and rant and scream and say anything he wants.”

Over the following decades, those few thousand fans would become millions as Soundgarden, with Cornell, became one of the most commercially successful rock bands of a generation. Among the band’s biggest hits were “Rusty Cage,” “Jesus Christ Pose,” “Spoonman” and “Black Hole Sun.”

In a statement to The Times, Cornell’s publicist Brian Bumbery wrote that Cornell’s wife and family “were shocked to learn of his sudden and unexpected passing.”

Sgt. Adam Madera of the Detroit Police Department confirmed that police received a call from the MGM Grand Detroit hotel early Thursday and at 4:05 a.m. discovered Cornell’s body on the floor of his hotel room.

Soundgarden, which reunited in 2010, was in the middle of a tour that had taken the band to the Fox Theater in Detroit. It performed a set that included “Blow Up the Outside World,” “Spoonman,” “Outshined” and other fan favorites.

The band’s set list suggested the gig was to conclude with an encore of “Behind the Wheel,” according to a photo published by CNN.

However, the band’s last song was a cover of “In My Time of Dying,” an old blues song recorded by Blind Willie Johnson, Bob Dylan, Led Zeppelin and others. Its opening lines are: “In my time of dying, want nobody to mourn/ All I want for you to do is take my body home.”

On Twitter and Instagram and other social media outlets, peers and colleagues poured forth with reactions to Cornell’s death.

“SO SO stunned to hear about Chris Cornell! Such a terrible and sad loss! Thinking of his family tonight! RIP,” wrote guitarist Dave Navarro of Jane’s Addiction.

Neil Portnow, president and CEO of the Recording Academy, issued a statement that read, in part: “Chris Cornell was one of the influential originators of the 1990s Seattle grunge scene. A two-time Grammy Award winner, Chris’ dynamic stage presence and impressive vocal range made him a true rock-and-roll icon.

“From the international success he achieved as the founder and lead vocalist of Soundgarden, to fronting the Grammy-nominated supergroup, Audioslave, Chris’ extraordinary talent will forever live on and inspire fellow musicians and fans worldwide.”

Reaction to Cornell’s death reached across a broad swath of the music community and well beyond.

Sting wrote: “In a world drowning in the ugly noise & clamour of lies, Chris was a beautiful man w/a beautiful voice singing his truth.”

Elton John posted that he is “(s)hocked and saddened by the sudden death of @chriscornell. A great singer, songwriter and the loveliest man.”

And both sons of the Beatles’ John Lennon offered their thoughts: “Incredibly saddened to hear another great artist has passed,” Julian Lennon wrote. “Chris Cornell, you were without question Unique.” Sean Ono Lennon tweeted, in reference to Cornell’s recording of the song “Seasons,” I’ll never forget when I first heard this song (Chris Cornell R.I.P.).”

His former bandmate in Audioslave, Tom Morello, put up the following statement on his Instagram account: “I love you, brother. Thank you for your friendship and your humor and your intellect and your singular and unmatched talent. It was a great honor to know you as a friend and as a band mate.

“I am devastated and deeply saddened that you are gone dear friend but your unbridled rock power, delicate haunting melodies and the memory of your smile are with us forever,” Morello continued. “Your beautiful voice and beautiful self will always be in my heart. God bless you and your family.”

After first releasing music on the indie Seattle labels Sub Pop and SST, the band signed to A&M Records and issued its major-label debut album “Louder Than Love,” in 1990. The group’s 1991 follow-up, “Badmotorfinger,” gave the band its first platinum-selling album, although it peaked at only No. 39 on the Billboard 200 Albums chart.

But with “Superunknown” in 1994, Soundgarden shot to the top of that chart with an album that went on to sell more than 5 million copies, according to the Recording Industry Assn. of America.

“Other Seattle bands, from Pearl Jam to Alice in Chains to Nirvana, have gotten more headlines,” Richard Cromelin wrote for The Times in 1996 on the release of the band’s “Down On the Upside” album, “but it’s Soundgarden that’s the most enduring, stalwart presence in a music scene whose sound and outlook have come to define the restless heart of ‘90s American rock.”

After that group disbanded in 1997, Cornell demonstrated his versatility first by forming Audioslave with Rage Against’ the Machine members Morello, Tim Commerford and Brad Wilk, and subsequently performing shows in a solo acoustic format.

“Like all exceptional artists, Chris Cornell is a master of transformation,” Remfry Dedman wrote for the Independent in the U.K. in 2005. “From wailing over twisted distorted riffs to crooning over mournful sorrow-fuelled ballads, Cornell can turn his hand (or should that be voice) to practically any iterations and pull it off with aplomb.”