Winger delights in ‘The Lovers’ 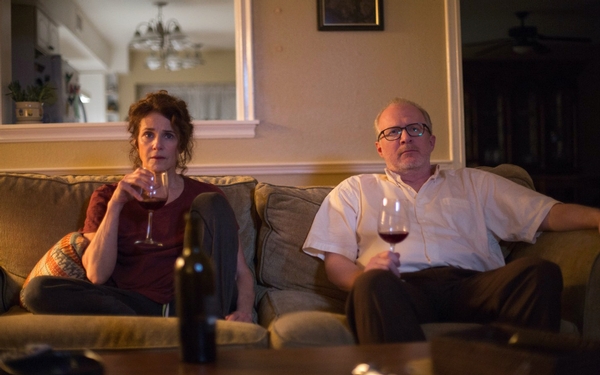 There’s a teeny-tiny movie, complete and perfect, deep inside “The Lovers”; it’s about five seconds long and it stars Debra Winger’s eyes. She’s Mary, a long-married woman juggling a husband (Tracy Letts) and a lover (Aidan Gillen) and wondering how to tell her son (Tyler Ross) that his parents are splitting up. In a brief moment in a car where she gazes into the rearview mirror, there it is: anger, puzzlement, soulfulness, resignation — all in one silent, devastating moment.

Winger doesn’t make movies very often these days; her last significant role, in “Rachel Getting Married,” was nine years ago. So I’m not particularly inclined to lean on “The Lovers” too much for being a little stagy (though it is); it’s such a pleasure to see her again. The idea here is that both spouses are cheating on the other — Mary’s lover is a tedious writer, husband Michael’s paramour (Melora Walters) is a needy ballet teacher — and that each thinks the other doesn’t know. And, though their marriage is at its end, there’s still a spark between them; something faintly electric that refuses to die.

Written and directed by Azazel Jacobs (“Terri”), “The Lovers” is unmistakably a comedy; playful music and cute double-takes abound. Mary and Michael are deliberately crafted as bland, with regular-person unglamorous jobs involving cubicles and a lot of beige, and we don’t see what led them to stray from their marriage. But you wonder, throughout, how Michael could be letting Mary slip away. Letts has some fine moments, but it’s Winger who really brings the color to this movie, creating a woman filled with disappointment and passion and wit, taking a small-scale comedy of manners to a darker, richer place. Feast your eyes on her; it might be a while before you get a chance again.

Written and directed by Azazel Jacobs.

Rated R for sexuality and language.